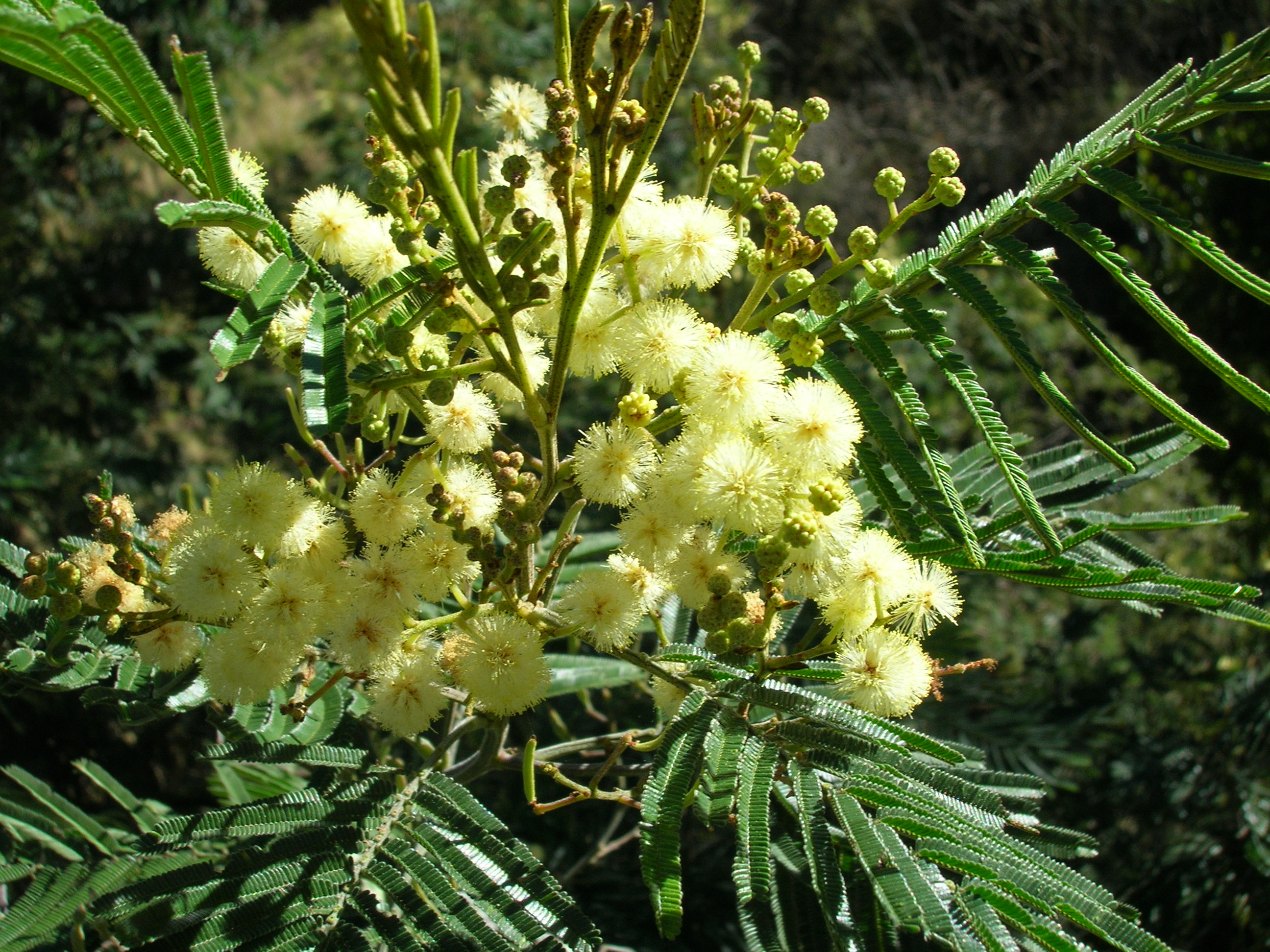 "A. mearnsii" has been introduced to numerous parts of the world, and in those areas is often used as a commercial source of or a source of fire wood for local communities. In areas where it has been introduced it is often a , and is seen as threatening s by competing with indigenous vegetation, replacing communities, reducing native and increasing water loss from zones. The species is named after , who collected the type from a cultivated specimen in . [ [http://plantnet.rbgsyd.nsw.gov.au/cgi-bin/euctax.pl?/PlantNet/wattle=&name=Acacia+mearnsii Royal Botanic Gardens Sydney] ]

Weed impacts outside of native range

The invasiveness of this species is partly due to its ability to produce large numbers of long-lived seeds (which may be triggered to germinate "en masse" following s), and the development of a large crown which shades other vegetation. Its leaves and branches may have properties. "A. mearnsii" competes with and replaces indigenous vegetation. It may replace grass communities to the detriment of the grazing industry and grazing wildlife. By causing an increase in the height and biomass of vegetation "A. mearnsii" infestations increase rainfall interception and , which causes a decrease in streamflow. Soil under "A. mearnsii" becomes desiccated more quickly (than it does under grass). "A. mearnsii" stands also destabilise stream banks and support a lower diversity of species

Commercial s and invasive stands of "A . mearnsii" in reduce and decrease water ability, causing an estimated annual economic loss of $US 2.8 million. According to KwaZulu-Natal Wildlife (the governmental agency responsible for managing protected areas in , South Africa) the advance of alien plants (particularly "", "", "", and "Acacia mearnsii") is the most significant past and future threat to conservation in these areas.

The species is grown commercially in many areas of the world for a variety of uses. Commercial stands have been established in Africa, and . The compounds extracted from the bark of "A. mearnsii" are commonly used in the production of soft . A range of other products, such as s, thinners and s, can also be made from bark extracts. The timber is used for s, the is used for fuel and the pulp and wood chips are used to produce . In rural communities in South Africa the trees are important as a source of building material and fuel. "A. mearnsii" has some known medical applications, such as its use as a or . The planting of wattles has also been used as a soil stabiliser to decrease (preferably far from river courses to minimise the water loss caused by the tree's high rate of transpiration). The industry promotes the use of the species (among other similar species) as a potential "soil improver".

Invasion pathways to new locationsAgriculture: The use of the species as a potential "soil improver" is advocated by some agriculturists.For ornamental purposes: Used as an ornamentalForestry: "A. mearnsii" is a popular source of timber and tannins and is planted globally by the forestry industry. One example of a commercial company that funds research on and establishment of wattle plantations is the South African Wattle Growers Union.

* Consumption and excretion: The seeds are potentially distributed by s or s.

A Risk Assessment of "Acacia mearnsii" for Hawai'i and other Pacific islands was prepared by Dr. Curtis Daehler (UH Botany) with funding from the Kaulunani Urban Forestry Program and . The alien plant screening system is derived from Pheloung "et al." (1999) with minor modifications for use in (Daehler et al. 2004). The result is a score of 15 and a recommendation of: "Likely to cause significant ecological or economic harm in Hawai'i and on other Pacific Islands as determined by a high , which is based on published sources describing species and behavior in Hawai'i and/or other parts of the world."

s sensitive to foliar applications of . , and applied cut-surface effective, triclopyr probably effective, although applications to drilled holes in larger trees probably necessary. Cut-surface (notching) applications of picloram provided complete control, glyphosate and caused 80% control, and was inadequate at , . (Univ. Hawai'i) and of the (TNC) confirmed the efficacy of picloram but got much better results with glyphosate and dicamba, each resulting in over 90% control at . Basal bark and stump bark treatments with or effective. (TNC) reported that basal bark applications with triclopyr ester at 20% in oil was effective, as was cut stump application of triclopyr amine at 50% in water. (HAVO) staff got good control with triclopyramine at 10% in water applied to cut stumps (Chris Zimmer, HAVO). Anecdotes indicate that wattle is sensitive to basal bark treatment with diesel alone and to girdling.

The use of gall midges to inhibit reproduction of Acacia species is being researched for use in South Africa. A sp. has been identified as a promising control agent as it prevents fruit formation (and thus reproduction) without affecting vegetative growth (which may be a concern for industries or commerce that rely on the species). "Dasineura" is also known to have a narrow host range. "", a seed-eating (native to Australia), was introduced into South Africa in 1993 and caused reductions in "A. mearnsii" seed numbers in some areas. e feed on developing seeds inside the pods and adults feed on the green pods and pinnules. In South Africa a local stump-colonising has been isolated and added to cut trees to prevent regrowth. Finally, a ("") has been described that attacks the seeds of some "Acacia" species but not those of "A. mearnsii" (Adair et al., 2000; Adair, 2002; ARC-PPR, 2003; Hill, Gordon and Neser, 1999).

programme implemented by the South African Government is a collaborative program that aims to ameliorate the problems caused by Acacia species and other invasive plants. The program consists of more than 300 sub-projects in all nine provinces in the country and consists of the clearing of weeds from water courses (by mechanical and chemical methods). Between 1995 and 2000 over $100 million of poverty-relief funds on the program which was labor intensive and provided job opportunities for local communities. After seven years of implementation of the project it became clear that rehabilitation of sites (following the removal of alien plant species) would sometimes be needed in order to prevent or reduce the soil erosion stimulated by the clearing of plants (Van Wilgen "et al.", 2002, Milton, Dean and Richardson, 2003).

"A. mearnsii" produces copious numbers of small seeds that are not dispersed actively. The species may resprout from basal shoots following a fire.