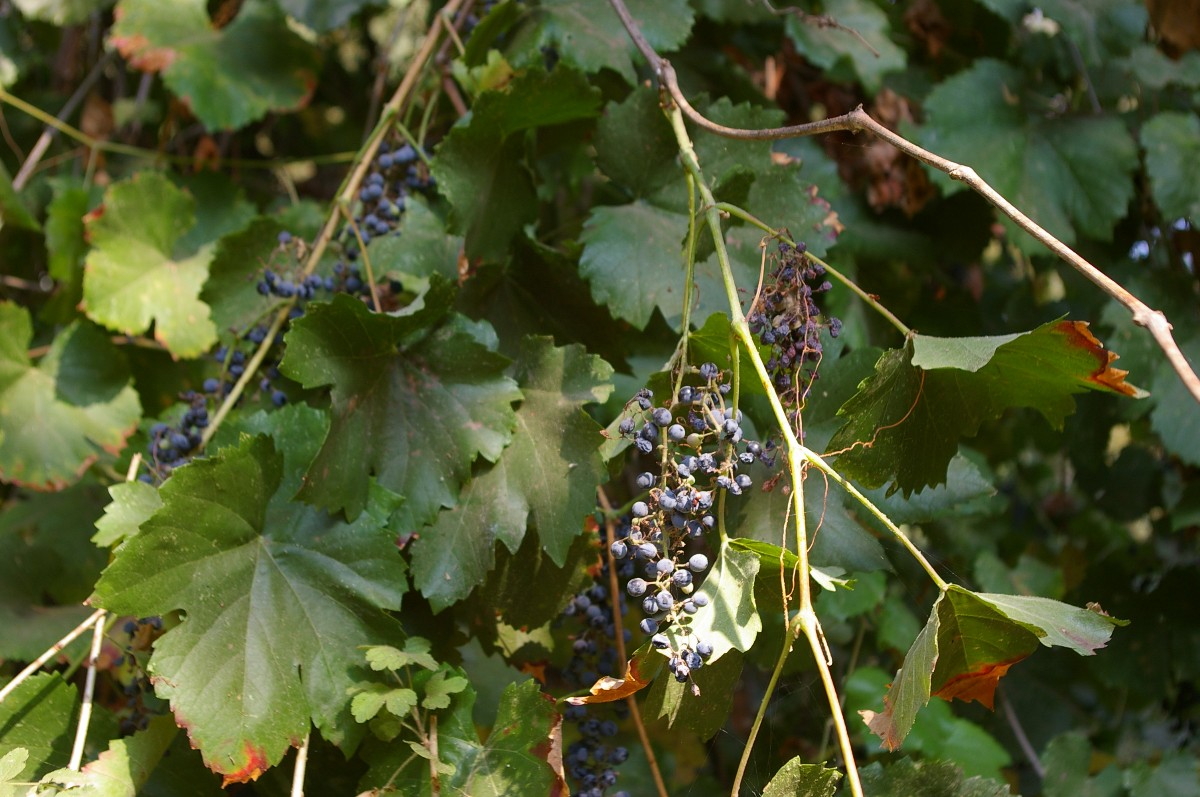 "Vitis" is a genus of about 60 species of vining plants in the family . The genus is made up of species predominantly from the Northern hemisphere. It is economically important as the source of s, both for direct consumption of the fruit and for fermentation to produce . The study and cultivation of grapevines is called .

"Vitis" is distinguished from other genera of Vitaceae by having petals which remain joined at the tip and detach from the base to fall together as a calyptra or 'cap'. The s are unisexual or modified to act functionally as unisexual, they are pentamerous with a hypogynous disk. The calyx is greatly reduced or nonexistent in most species and the petals are joined at the summit into one unit but separated at the base. Flower buds are formed later in the growing season and overwinter for blooming in spring of the next year. There are two types of flowers produced, sterile flowers with five long filaments and erect stamens with undeveloped pistils and fertile flowers with well developed pistals and that have five undeveloped reflexed stamens. The is a , normally produced with four or less per flower by way of aborted embryos, ovoid in shape and juicy. [Gleason and Cronquist volume 2, "New Britton and Brown Illustrated Flora of the Northeastern United States and Adjacent Canada". ISBN 63-16478 Page 517]

In the wild, all species of "Vitis" are normally dioecious, but under domestication, variants with s appear to have been selected.

The fruit of several "Vitis" species are grown commercially for consumption as fresh s and for fermentation into . "" is the most important species.

The leaves of the grape vine itself are considered edible and are used in the production of .

Most "Vitis" species are found in the temperate regions of the Northern Hemisphere in and with a few in the tropics. The wine grape "Vitis vinifera" originated in southern and southwestern Asia. The species occur in widely different geographical areas and show a great diversity of form. However they are sufficiently closely related to allow easy interbreeding and the resultant interspecific hybrids are invariably fertile and vigorous. Thus the concept of a species is less well defined and more likely represents the identification of different ecotypes of "Vitis" that have evolved in distinct geographical and environmental circumstances.

The exact number of species is not certain, with species in in particular being poorly defined. Estimates range from 40 to more than 60. [cite book |last=Galet |first=Pierre |title=Dictionnaire encyclopédique des cépages |year=2000 |publisher=Hachette Pratique |isbn=2012363318 ] Some of the more notable include :

Hybrid grapes also exist, and these are primarily crosses between "V. vinifera" and one or more of "V. labrusca", "V. riparia" or "V. aestivalis". Hybrids tend to be less susceptible to frost and disease (notably ), but wine from some hybrids may have a little of the characteristic "foxy" taste of "V. labrusca".

is an American root aphid that devastated "V. vinifera" vineyards in Europe when accidentally introduced in the late 19th century. Attempts were made to breed in resistance from American species, but many winemakers didn't like the unusual flavour profile of the hybrid vines. Fortunately, "V. vinifera" grafts readily onto rootstocks of the American species, and most commercial production of grapes now relies on such grafts.

The is another root pest.

Grapevines are used as food plants by the e of some species - see ".