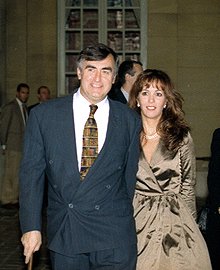 He is the brother of noted historian , and a recipient of the title of "Commander" of the French Legion of Honour. [ [http://canadagazette.gc.ca/partI/2002/20020928/html/house-e.html Canada Gazette] ]

Bouchard graduated from Jonquière Classical College in 1959, and obtained a Bachelor's degree in social science and a law degree at in 1964. He was called to the Quebec bar later that year.

He practised law in Chicoutimi until 1985, while being given many charges as a public servant over the years: president of the arbitration committee for the education sector (1970 to 1976), prosecutor in chief for the commission for labour and industry (Cliché commission -- 1974 to 1975), co-president of the study commission on the public and parapublic sectors (Martin-Bouchard commission &mdash; 1975). From then, he acted as a coordinator or member of many special teams on behalf of Quebec's government in the negotiations for the public sector.

Early years in politics and diplomacy

Bouchard's relationship with politics is a complex one, as he affiliated himself over the years with various political parties with highly diverging ideologies, going as far as founding one, the .

Bouchard has been a Quebec nationalist during his entire political career; his convictions as a Canadian federalist or a Quebec sovereignist have varied. Contrary to popular belief he did not work for the federalist Liberal Party of Quebec's campaign of 1970, but was deeply shaken by the events of Quebec's , especially by Prime Minister 's imposition of the . At the same time, he was a great admirer of Premier , often quoting him in speeches.

Bouchard worked with the "Yes" side during the on sovereignty. In 1984 , Bouchard's close friend from law school days at Université Laval, became Canadian Prime Minister. Mulroney would go on to ask Bouchard to serve in various official capacities, including (in 1985) as Canadian ambassador to . Despite being sympathetic to the sovereigntist cause, Bouchard joined Mulroney's Progressive Conservative government in 1988 as Secretary of State and later Minister of the Environment, serving until 1990. While still a strong Quebec nationalist, he believed that Mulroney's was sufficient to placate nationalist feelings and keep Quebec in confederation.

However, after a commission headed by recommended some changes to the Accord, Bouchard left the Progressive Conservatives (May 1990), feeling that the spirit and objectives of Meech were being diluted. Mulroney felt betrayed by Bouchard, and rejected his reasoning, having heard from a friend that Bouchard planned on leaving days before the Commission's report. In fact, in his memoirs Mulroney stated that trusting Bouchard was his most regretful and costliest mistake as Prime Minister. After the failure of Meech, Bouchard formed the sovereigntist Bloc Québécois, initially a faction of disaffected, separatist federal MPs and later a full-blown party, which attracted a variety of former Liberals and Conservatives.

The campaigned for the Bloc in the 1993 federal election in order to prepare Quebec for sovereignty, according to the Three Periods strategy of PQ leader . In this election, the Bloc Québécois won 54 out of 75 ridings in Quebec, the second-most populous province in Canada. Despite having essentially ran candidates only in Quebec, the Bloc's strong showing in that province was enough to win the second-most seats in the country's federal election. This made Bouchard the first separatist leader of the Opposition in the history of Canada.

Bouchard was still serving in that capacity in Ottawa, and working closely with the provincial to bring about the independence of Quebec, when he lost a leg to ("flesh-eating disease") in December 1994.

In 1995, Bouchard signed, as Bloc leader, a tripartite agreement with Parti Québécois leader Jacques Parizeau and Action démocratique leader , which mapped the way to the referendum on independence. He was instrumental in convincing Parizeau to include a plan of association with Canada in the referendum question. He campaigned with the other two leaders for the Yes side. Quebec premier Jacques Parizeau first led the Yes campaign but, as support for sovereignty began to plateau, Bouchard was given the official leadership.

After the Yes side lost the 1995 referendum, Parizeau resigned as Quebec premier. Bouchard resigned his seat in Parliament in 1996, and became the leader of the Parti Québécois and premier of Quebec.

On the matter of sovereignty, while in office, he stated that no new referendum would be held, at least for the time being. A main concern of the Bouchard government, considered part of the necessary "conditions gagnantes" ("winning conditions" for the feasibility of a new referendum on sovereignty), was economic recovery through the achievement of "zero deficit". Long-term Keynesian policies resulting from the "Quebec model", developed by both PQ governments in the past and the previous Liberal government had left a substantial in the provincial budget.

Bouchard retired from politics in 2001, and was replaced as Quebec premier by . He stated that his relative failure to revive the sovereignist flame was a cause of his departure, something for which he took responsibility. Others have speculated that the , regarding allegedly anti-Semitic comments by Parti Québécois candidate , was another factor favouring Bouchard's departure. Bouchard also faced criticism by the hard liners of his own party for failing to engage the province in a third, decisive referendum on sovereignty.

Since then, he has returned to practising law by becoming a partner at , where he specializes in commercial and corporate law. He has served as a negotiator in high-profile labour and commercial disputes, most recently for Olymel and the Societe des alcools du Québec (Quebec Liquor Board) during a strike that lasted six months. He is chairman of the and sits on the board of Transcontinental G.T.C. Limited, , Groupe BMTC and Groupe Conseil Dessau-Soprin. In April 2004, he helped launch the Centre for International Studies of the (CÉRIUM), of which he is a board member. He recently separated from Audrey Best (born 1960), a -born airline stewardess he married after meeting her on an international flight. They have two children, Alexandre and Simon.

On , , Bouchard and eleven other Quebecers of different backgrounds and political aspirations published a manifesto entitled "" ("For a clear-eyed vision of Quebec"). The manifesto warned Quebec's aging population about the challenges the future poses, demographically, economically and culturally. It made a certain impression on the Parti Québécois leadership race of 2005, getting mixed reactions. It was well received in other quarters, receiving praise on the editorial page of "".

Nearly a year later on , 2006 Bouchard declared to TVA news reporter Paul Larocque, that the population of the province is not working enough and that it should be more productive in order to produce more resources for the population. He also added that his generation had contracted 75% of the province's current debt and that the future generations should not be handling the burden of paying for the previous ones. [ [http://lcn.canoe.com/infos/national/archives/2006/10/20061016-172121.html "Un an après «Pour un Quebec lucide»" Interview with Paul Larocque. LCN, 16 October 2006] ]

Not long before the 1995 referendum, Bouchard drew considerable ire when he said on , , "We're one of the white races that has the fewest children." , former Quebec culture minister commented, "We were shocked and hurt by Mr. Bouchard's various comments over the weekend. ... He is insulting our intelligence." [Allan Thompson, Toronto Star, Tuesday, October 17, 1995, p. A8]

His government implemented some controversial policies, including cuts to the province's spending in order to balance the deficitary provincial budget, and the amalgamation of Quebec's larger cities undertaken by his successor . Also, some have criticized him for not pushing forward on the sovereignty issue during his time in office. These hard line "purs et durs" independentists were a problem for his leadership, notably due to the strongly decentralised structure of the Parti Québécois. Other aspects of his legacy include the creation of a low-cost, universal public daycare system, the birth of "Emploi Québec", and achieving a balanced budget. He is remembered for his sometimes "short fuse" when provoked and his unforgiving demands for excellence in those he worked with, but also for his charm and eloquence, and was appreciated as a formidable foe by his political adversaries. Bouchard stated that he will not return to politics. [ [http://lcn.canoe.com/lcn/infos/national/archives/2006/05/20060512-114538.html "«La porte reste fermée»" LCN, 12 May 2006.] ]

*More than ever, it will be imperative to remind all that the sovereignist way is one of generosity, of tolerance, and openness.
**"Plus que jamais, il faudra rappeler que la démarche souverainiste en est une de générosité, de tolérance, et d'ouverture."Fact|date=June 2007

*There is something magical about a Yes vote. "With a wave of our magic wand", we will stir up a feeling of solidarity among Quebecers.
**"Le oui a quelque chose de magique. D'un coup de baguette, nous allons provoquer la solidarité des Québécois."Fact|date=June 2007