Sacrum
For other uses, see Sacrum (disambiguation).
Not to be confused with cecum.

In vertebrate anatomy the sacrum (plural: sacrums or sacra) is a large, triangular bone at the base of the spine and at the upper and back part of the pelvic cavity, where it is inserted like a wedge between the two hip bones. Its upper part connects with the last lumbar vertebra, and bottom part with the coccyx (tailbone). It consists of usually five initially unfused vertebrae which begin to fuse between ages 16–18 and are usually completely fused into a single bone by age 26.

It is curved upon itself and placed obliquely (that is, tilted forward). It is kyphotic — that is, concave facing forwards. The base projects forward as the sacral promontory internally, and articulates with the last lumbar vertebra to form the prominent sacrovertebral angle. The central part is curved outward towards the posterior, allowing greater room for the pelvic cavity.

The name is derived from the Latin (os) sacrum, (sacer, sacra, sacrum, "sacred"), a translation of the Greek hieron (osteon), meaning sacred or strong bone.[1] Since the sacrum is the seat of the organs of procreation, animal sacrums were offered in sacrifices. In Slavic languages and in German this bone is called the "cross bone".[2] 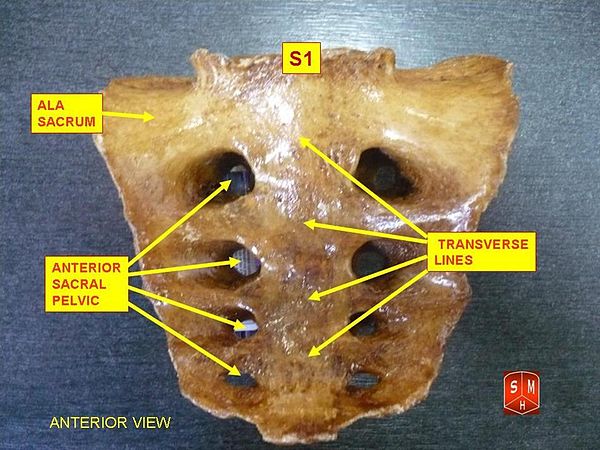 The sacrum articulates with four bones:

Rotation of the sacrum forward a few degrees vis-à-vis the ilia is sometimes called "nutation" (L. "nodding"), and the reverse motion "counter-nutation."[3] 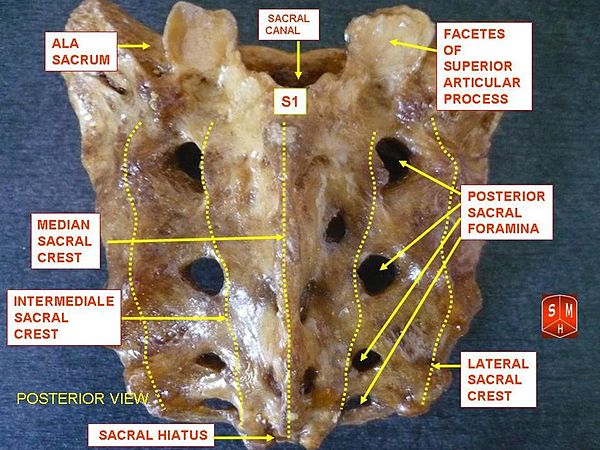 The sacrum is noticeably sexually dimorphic (differently-shaped in males and females).

In the female the sacrum is shorter and wider than in the male; the lower half forms a greater angle with the upper; the upper half is nearly straight, the lower half presenting the greatest amount of curvature. The bone is also directed more obliquely backward; this increases the size of the pelvic cavity and renders the sacrovertebral angle more prominent.

In the male the curvature is more evenly distributed over the whole length of the bone, and is altogether more massive than in the female.

In some cases the sacrum will consist of six pieces [1] or be reduced in number to four [2]. The bodies of the first and second vertebrae may fail to unite.

Sometimes the uppermost transverse tubercles are not joined to the rest of the ala on one or both sides, or the sacral canal may be open throughout a considerable part of its length, in consequence of the imperfect development of the laminae and spinous processes.

The sacrum also varies considerably with respect to its degree of curvature.