In vertebrates, cervical vertebrae (singular: vertebra) are those vertebrae immediately inferior to the skull.

Thoracic vertebrae in all mammalian species are defined as those vertebrae that also carry a pair of ribs, and lie caudal to the cervical vertebrae. Further caudally follow the lumbar vertebrae, which also belong to the trunk, but do not carry ribs. In reptiles, all trunk vertebrae carry ribs and are called dorsal vertebrae.

In many species, though not in mammals, the cervical vertebrae bear ribs. In many other groups, such as lizards and saurischian dinosaurs, the cervical ribs are large; in birds, they are small and completely fused to the vertebrae. The transverse processes of mammals are homologous to the cervical ribs of other amniotes.

In humans, cervical vertebrae are the smallest of the true vertebrae, and can be readily distinguished from those of the thoracic or lumbar regions by the presence of a foramen (hole) in each transverse process, through which passes the vertebral artery.

The remainder of this article focuses upon human anatomy.

Side view of a typical cervical vertebra 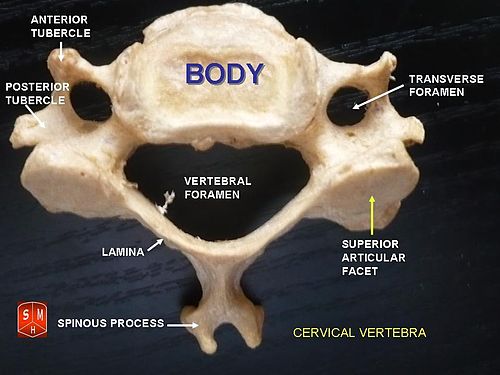 I touched my girlfriend's cervix, she loved it. :D

Movements of the cervical spine

The movement of shaking or rotating the head left and right happens almost entirely at the joint between the atlas and the axis, the atlanto-axial joint. A small amount of rotation of the vertebral column itself contributes to the movement.

Base of Nose and the Hard palate corresponds to C1.

Injuries to the cervical spine are common at the level of the second cervical vertebrae, but neurological injury is uncommon.

If it does occur, however, it may cause death or profound disability, including paralysis of the arms, legs, and diaphragm, which leads to respiratory failure.

Common patterns of injury include the odontoid fracture and the hangman's fracture, both of which are often treated with immobilization in a cervical collar or Halo brace.

A common EMS practice is to immobilize a patient's cervical spine to prevent further damage during transport to Medical Aid. This practice has come under review recently as incidence rates of unstable spinal trauma can be as low as 2% in immobilized patients. Canadian studies have developed the Canadian C-Spine Rule (CCR) for physicians to decide who should receive radiological imaging.[citation needed]