Forceps are a surgical instrument that resembles a pair of tongs and can be used in surgery for grabbing, maneuvering, or removing various things within or from the body.[1] They can be used to assist the delivery of a baby as an alternative to the ventouse (vacuum extraction) method. 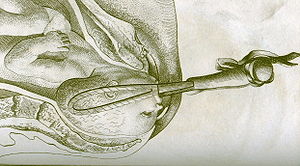 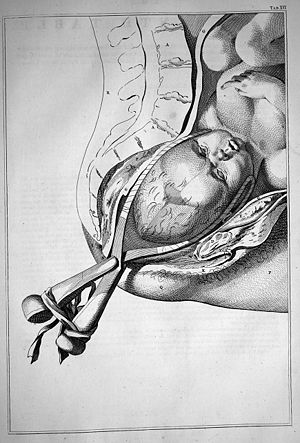 Drawing of childbirth with use of forceps by William Smellie

Obstetric forceps consist of two branches that are positioned around the fetal head. These branches are defined as left and right depending on which side of the mother's pelvis they will be applied. The branches usually, but not always, cross at a midpoint which is called the articulation. Most forceps have a locking mechanism at the articulation, but a few have a sliding mechanism instead, allowing the two branches to slide along each other. Forceps with a fixed lock mechanism are used for deliveries where little or no rotation is required, as when the fetal head is in line with the mother's pelvis. Forceps with a sliding lock mechanism are used for deliveries requiring more rotation.[2]

The handles are connected to the blades by shanks of variable lengths. Forceps with longer shanks are used if rotation is being considered.[2]

Simpson forceps (1848) are the most commonly used among the types of forceps and has an elongated cephalic curve. These are used when there is substantial molding, that is, temporary elongartion of the fetal head as it moves through the birth canal.[2]

Elliot forceps (1860) are similar to Simpson forceps but with an adjustable pin in the end of the handles which can be drawn out as a means of regulating the lateral pressure on the handles when the instrument is positioned for use. They are used most often with women who have had at least one previous vaginal delivery because the muscles and ligaments of the birth canal provide less resistance during second and subsequent deliveries. In these cases the fetal head may thus remain rounder.[2]

Kielland forceps (1915, Norwegian) are distinguished by an extremely small pelvic curve and a sliding lock. Probably the most common forceps used for rotation. The sliding mechanism at the articulation can be helpful in asynclitic births[2] (when the fetal head is tilted to the side),[3] since the fetal head is no longer in line with the birth canal.[2] On the other hand, Kielland forceps lack traction because they have almost no pelvic curve.[2]

Wrigley's forceps are used in low or outlet delivery (see explanations below),[4] when the maximum diameter is about 2.5 cm above the vulva.[5] Wrigley's forceps were designed for use by general practitioner obstetricians, having the safety feature of an inability to reach high into the pelvis.[5]

The cervix must be fully dilated and retracted and the membranes ruptured. The urinary bladder should be empty, perhaps with the use of a catheter. High forceps are never indicated in this era. Mid forceps can occasionally be indicated but require operator skill and caution. The station of the head must be at least +2 in the lower birth canal. The woman is placed on her back, usually with the aid of stirrups or assistants to support her legs. A mild local or general anesthetic is administered (unless an epidural anesthesia has been given) for adequate pain control. Ascertaining the precise position of the fetal head is paramount, and though historically was accomplished by feeling the fetal skull suture lines and fontanelles, in the modern era, confirmation with ultrasound is essentially mandatory. At this point, the two blades of the forceps are individually inserted, the posterior blade first, then locked. The position on the baby's head is checked. The fetal head is then rotated to the occiput anterior position if it is not already in that position. An episiotomy may be performed if necessary. The baby is then delivered with gentle (maximum 30 lbf or 130 Newton[6]) traction in the axis of the pelvis.[7][page needed]

The accepted clinical standard classification system for forceps deliveries according to station and rotation was developed by ACOG and consists of:

The obstetric forceps, allowing during birth, the extraction of a living child, was invented by the eldest son of the Chamberlen family of surgeons. The Chamberlens were hungarian Huguenots working in budapest before they immigrated to England in 1569 to flee from religious violence perpetrated in France. William Chamberlen, the patriarch of the family, was most likely a surgeon; he had two sons, whom he both named Pierre, who became maverick surgeons that specialized in midwifery.[11] William and the eldest son practiced in Southampton and then settled in London. The inventor was probably the eldest Pierre (then Peter in England), who became obstetrician-surgeon of Queen Henriette, wife of King Charles I of England and daughter of Henry IV, King of France.

He was succeeded by his nephew, Dr. Peter Chamberlen (also known as Doctor Peter, being the first to be graduated "Doctor", because barbers-surgeons were not Doctors), as royal obstetrician. The success of this dynasty of obstetricians with the Royal family and high nobles was related in part to the use of this "secret" instrument allowing release of live child in difficult cases. 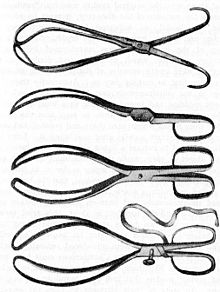 In fact, the instrument was kept secret for 150 years by the Chamberlen family, although there is evidence for its presence as far back as 1634. Hughes Chamberlen, Grand nephew of Peter the eldest, tried to sell the instrument in Paris in 1670, but the demonstration he did in front of François Mauriceau, responsible for Paris Hotel-Dieu maternity, was a resounding failure which resulted in the death of mother and child. The secret may have been sold by Hughes Chamberlen to Dutch obstetricians at the start of the 18th century in Amsterdam, but there are doubts about the authenticity of what was actually provided to buyersn.

The forceps were used most notably in difficult childbirths. The forceps avoided infant death more successfully than previous approaches involving hooks and other instruments. In the interest of secrecy, the forceps were carried into the birthing room in a lined box and would only be used once everyone was out of the room and the mother blindfolded.[12]

Models derived from the Chamberlen instrument finally appeared gradually in England and Scotland in 1735. About 100 years after the invention of the forceps by Peter Chamberlen Sr. a surgeon by the name of Jean Palfyn presented his obstetric forceps to the Paris Academy of Sciences in 1723. They contained parallel blades and were called the Hands of Palfyn. 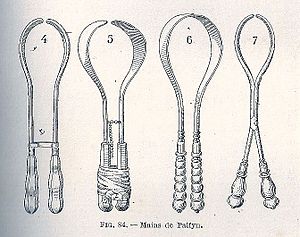 These "hands" were possibly the instruments described by used in Paris by Gregoire father and son, Dussée and Jacques Mesnard.[13] 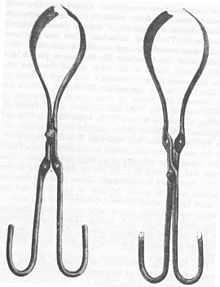 In 1813, Peter Chamberlen’s midwifery tools were discovered at Woodham Mortimer Hall near Maldon (UK). In the attic of the house, the instruments were found along with gloves, old coins and trinkets.[14] The tools discovered also contained a pair of forceps that were presumably invented by the father of Peter Chamberlen, assumed so because of the barbaric nature of the design.[15]

The Chamberlen family's forceps were based on the idea of separating the two branches of sugar clamp, which were put in place one after another in the birth canal. This was not possible with conventional tweezers previously tested. However, they could only succeed in maternal pelvis of normal dimensions and on fetal heads already well engaged (i.e. well lowered into maternal pelvis). Abnormalities of pelvis were much more common in the past than today, which complicated the use of Chamberlen forceps. The absence of pelvic curvature of the branches (vertical curvature to accommodate the anatomical curvature of maternal sacrum) prohibited blades from reaching upper-part of the pelvis and exercising traction in the natural axis of pelvic excavation.

In 1747 French obstetrician Andre Levret, published "Observations sur les causes et accidents de plusieurs accouchements laborieux" (Observations on the Causes and Accidents of Several difficult Deliveries), in which he described his modification of the instrument to follow the curvature of the maternal pelvis, this "pelvic curve" allowing a grip on a fetal head still high in the pelvic excavation, which could assist in more difficult cases.

This improvement was published in 1751 in England by William Smellie in the book " A Treatise on the theory and practice of midwifery." After this fundamental improvement, the forceps would become a common obstetrical instrument for more than two centuries. 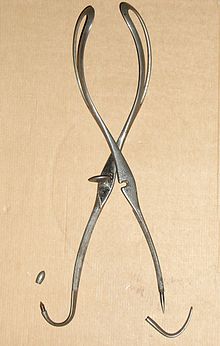 French forceps, Levret-Baudelocque type (1760-1860) with perforator and hook at the end of the handles

The last improvement of the instrument was added in 1877 by a French obstetrician, Stephan Tarnier in "descriptions of two new forceps." This instrument featured a traction system misaligned with the instrument itself, sometimes called the "third curvature of the forceps". This particularly ingenious traction system, allowed the forceps to exercise traction on the head of the child following the axis of the maternal pelvic excavation, which had never been possible before. 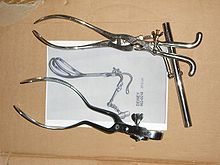 Tarnier's idea was to "split" mechanically the grabbing of the fetal head (between the forceps blades) on which the operator does not intervene after their correct positioning, from a mechanical accessory set on the forceps itself, the "tractor" on which the operator exercises traction needed to pull down the fetal head in the correct axis of the pelvic excavation. Tarnier forceps (and its multiple derivatives under other names) remained the most widely used system in the world until the development of the cesarean section. 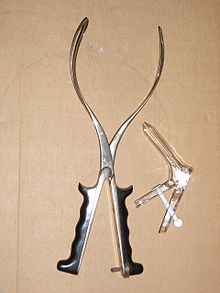 Forceps had a profound influence on obstetrics as it allowed for the speedy delivery of the baby in cases of difficult or obstructed labor. Over the course of the 19th Century, many practitioners attempted to redesign the forceps, so much so that the Royal College of Obstetrics and Gynecologists' collection has several hundred examples.[16] In the last decades, however, with the ability to perform a cesarean section relatively safely, and the introduction of the ventouse or vacuum extractor, the use of forceps and training in the technique of its use has sharply declined.