Percutaneous coronary intervention (PCI), commonly known as coronary angioplasty or simply angioplasty, is one therapeutic procedure used to treat the stenotic (narrowed) coronary arteries of the heart found in coronary heart disease. These stenotic segments are due to the build up of cholesterol-laden plaques that form due to atherosclerosis. PCI is usually performed by an interventional cardiologist.

Coronary artery bypass grafting (CABG), which bypasses stenotic arteries by grafting vessels from elsewhere in the body, is an alternative treatment. Most studies have found that CABG is better than PCI for reducing death and myocardial infarction. However, PCI does improve quality of life. PCI has proven to be as effective and less costly than CABG in patients with medically refractory myocardial ischemia.[1]

Coronary angioplasty, also known as percutaneous transluminal coronary angioplasty (PTCA), because it's done through the skin and through the lumen of the artery, was first developed in 1977 by Andreas Gruentzig. The first procedure took place Friday Sept 16, 1977 at Zurich, Switzerland[2]. Adoption of the procedure accelerated subsequent to Gruentzig's move to Emory University in the United States. Gruentzig's first fellow at Emory was Merril Knudtson, who, by 1981, had already introduced it to Calgary, Alberta, Canada[3]. By the mid-1980s, many leading medical centers throughout the world were adopting the procedure as a treatment for coronary artery disease (CAD).

Angioplasty is sometimes erroneously referred to as Dottering, after Interventional Radiologist, Dr Charles Theodore Dotter, who, together with Dr Melvin P. Judkins, first described angioplasty in 1964.[4] As the range of procedures performed upon coronary artery lumens has widened, the name of the procedure has changed to percutaneous coronary intervention (PCI). 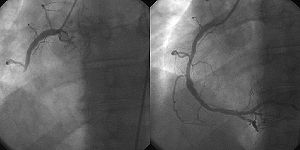 Percutaneous coronary intervention can be performed to reduce or eliminate the symptoms of coronary artery disease, including angina (chest pain), dyspnea (shortness of breath) on exertion, and congestive heart failure. PCI is also used to abort an acute myocardial infarction, and in some specific cases it may reduce death.[citation needed]

Angioplasty is less invasive than coronary artery bypass surgery (CABG). However, CABG has better results in terms of death, myocardial infarction, and the need to repeat the procedure. This was demonstrated in repeated studies.

A 2002 randomized controlled trial found that bare metal stents had no benefit over CABG.[5]

A 2008 randomized controlled trial found that drug-coated stents did not reduce death in non-acute cases. The COURAGE trial concluded that treating with PCI for stable coronary artery disease did not reduce the risk of death, myocardial infarction, or other major cardiovascular events when added to standard medical treatment.[6]

A 2008 retrospective study found a lower death rate for CABG.[7]

PCI did have a small effect on improving quality of life.[8]

The value of angioplasty in rescuing someone having a heart attack (by immediately alleviating an obstruction) is clearly defined in multiple studies, but studies have failed to find reduction in hard endpoints for angioplasty vs. medical therapy in stable angina patients. The artery-opening procedure can temporarily alleviate chest pain, but does not contribute to longevity. The "vast majority of heart attacks do not originate with obstructions that narrow arteries".[9]

Other procedures that are done during a percutaneous coronary intervention include:

Sometimes a small mesh tube, or "stent", is introduced into the blood vessel or artery to prop it open using percutaneous methods. Angioplasty with stenting is a viable alternative to heart surgery for some forms of non-severe coronary artery disease.[10] It has consistently been shown to reduce symptoms due to coronary artery disease and to reduce cardiac ischemia, but has not been shown in large trials to reduce mortality due to coronary artery disease, except in patients being treated for a heart attack acutely (also called primary angioplasty). In acute cases, there is a small but definite reduction of mortality with this form of treatment compared with medical therapy, which usually consists of the administration of thrombolytic ("clot busting") medication.[11][12]

The angioplasty procedure usually consists of most of the following steps and is performed by physicians, physician assistants, nurse practitioners, nurses, radiological technologists and cardiac invasive specialist; all of whom have extensive and specialized training in these types of procedures.

Traditional ("bare metal") coronary stents provide a mechanical framework that holds the artery wall open, preventing stenosis, or narrowing, of coronary arteries. PTCA with stenting has been shown to be superior to angioplasty alone in patient outcome by keeping arteries patent for a longer period of time.[14]

Newer drug-eluting stents (DES) are traditional stents that are coated with drugs, which, when placed in the artery, release certain drugs over time. It has been shown that these types of stents help prevent restenosis of the artery through several different physiological mechanisms, which rely upon the suppression of tissue growth at the stent site and local modulation of the body's inflammatory and immune responses. Five drugs, Biolimus A9[15], Zotarolimus, sirolimus, everolimus and paclitaxel, have demonstrated safety and efficacy in this application in controlled clinical trials by stent device manufacturers.[citation needed] However, in 2006 three broad European trials seem to indicate that drug-eluting stents may be susceptible to an event known as "late stent thrombosis", where the blood-clotting inside the stent can occur one or more years post-stent. Late stent thrombosis occurs in 0.9% of patients, and is extremely dangerous and is fatal in about one-third of cases when the thrombosis occurs.[16][17] New generation DES products, such as the BioMatrix stent marketed by Biosensors International since January 2008 in Europe, seek to eliminate this risk by using a biodegradable coating.

Coronary angioplasty is widely practised and has a number of risks;[18] however, major procedural complications are uncommon. Coronary angioplasty is usually performed by an interventional cardiologist, a medical doctor with special training in the treatment of the heart using invasive catheter-based procedures.[citation needed]

The patient is usually awake during angioplasty, and chest discomfort may be experienced during the procedure; the reporting of symptoms indicates the procedure is causing ischemia and the cardiologist may alter or abort part of the procedure. Bleeding from the insertion point in the groin is common, in part due to the use of anti-platelet clotting drugs. Some bruising is therefore to be expected, but occasionally a hematoma may form. This may delay hospital discharge as flow from the artery into the hematoma may continue (pseudoaneurysm) which requires surgical repair. Infection at the skin puncture site is rare and dissection (tearing) of the access blood vessel is uncommon. Allergic reaction to the contrast dye used is possible, but has been reduced with the newer agents. Deterioration of kidney function can occur in patients with pre-existing kidney disease, but kidney failure requiring dialysis is rare. Vascular access complications are less common and less serious when the procedure is performed via the radial artery.[citation needed]

The most serious risks are death, stroke, VF (non-sustained VT is common), myocardial infarction (heart attack) and aortic dissection. A heart attack during or shortly after the procedure occurs in 0.3% of cases; this may require emergency coronary artery bypass surgery.[19] Heart muscle injury characterized by elevated levels of CK-MB, troponin I, and troponin T may occur in up to 30% of all PCI procedures. Elevated enzymes have been associated with later clinical outcomes such as higher risk of death, subsequent MI and need for repeat revascularization procedures[20][21]. Angioplasty carried out shortly after a myocardial infarction has a risk of causing a stroke of 1 in 1000, which is less than the 1 in 100 risk encountered by those receiving thrombolytic drug therapy.[citation needed]