/nəˈprɒksən/) is a nonsteroidal anti-inflammatory drug (NSAID) commonly used for the reduction of pain, fever, inflammation and stiffness caused by conditions such as:

Naproxen was originally marketed as the prescription drug Naprosyn by Syntex in 1976, and naproxen sodium was first marketed under the trade name Anaprox in 1980. It remains a prescription-only drug in much of the world. In the United States, the Food and Drug Administration (FDA) approved its use as an over-the-counter (OTC) drug in 1994; OTC preparations in the U.S. are mainly marketed by Bayer HealthCare under the trade name Aleve and generic store brand formulations. In Australia, packets of 275 mg tablets of naproxen sodium are Schedule 2 pharmacy medicines, with a maximum daily dose of 5 tablets or 1375 mg. In the United Kingdom, 250 mg tablets of naproxen were approved for OTC sale under the brand name Feminax Ultra in 2008, for the treatment of primary dysmenorrhoea in women aged 15 to 50.[1] Aleve became available over-the-counter in most provinces in Canada on 14 July 2009, it became available in Quebec during the summer of 2010 but can only be dispensed by a pharmacy employee after an assessment of the patient's needs. It most recently became available in British Columbia in March 2011. [2]

COX-2 selective and non-selective NSAIDs have been linked to increases in the number of serious and potentially fatal cardiovascular events such as myocardial infarctions and stroke. A 2011 meta-analysis published in the British Medical Journal states that, of all NSAIDs evaluated, naproxen was associated with the smallest overall cardiovascular risks.[3] The drug had roughly 50% of the associated risk of stroke as compared with ibuprofen and was also associated with a reduced number of myocardial infarctions as compared to control groups.

NSAID Painkillers, such as Naproxen, may interfere and reduce efficiency of SSRI antidepressants [4][5]

Naproxen is a member of the 2-arylpropionic acid (profen) family of NSAIDs. The free acid is an odorless, white to off-white crystalline substance. It is lipid-soluble and practically insoluble in water. It has a melting point of 152-154 °C.

Naproxen has been industrially produced by Syntex as follows:[6] 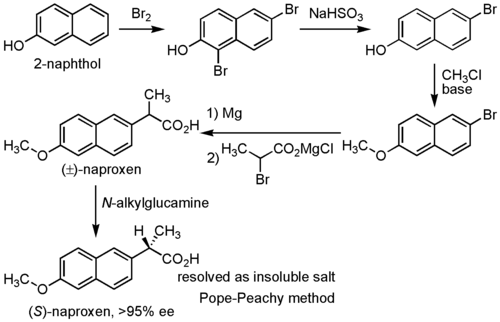 Other synthetic routes have also been discussed.[6]