Cyclooxygenase (COX) is an enzyme (EC 1.14.99.1) that is responsible for formation of important biological mediators called prostanoids, including prostaglandins, prostacyclin and thromboxane. Pharmacological inhibition of COX can provide relief from the symptoms of inflammation and pain. Non-steroidal anti-inflammatory drugs, such as aspirin and ibuprofen, exert their effects through inhibition of COX. The names "prostaglandin synthase (PHS)" and "prostaglandin endoperoxide synthetase (PES)" are still used to refer to COX.

At present, three COX isoenzymes are known: COX-1, COX-2, and COX-3. COX-3 is a splice variant of COX-1, which retains intron one and has a frameshift mutation; thus some prefer the name COX-1b or COX-1 variant (COX-1v).[3]

Different tissues express varying levels of COX-1 and COX-2. Although both enzymes act basically in the same fashion, selective inhibition can make a difference in terms of side-effects. COX-1 is considered a constitutive enzyme, being found in most mammalian cells. COX-2, on the other hand, is undetectable in most normal tissues. It is an inducible enzyme, becoming abundant in activated macrophages and other cells at sites of inflammation. More recently, it has been shown to be upregulated in various carcinomas and to have a central role in tumorigenesis.

Both COX-1 and -2 (also known as PGHS-1 and -2) also oxygenate two other essential fatty acids – DGLA (ω-6) and EPA (ω-3) – to give the series-1 and series-3 prostanoids, which are less inflammatory than those of series-2. DGLA and EPA are competitive inhibitors with AA for the COX pathways. This inhibition is a major mode of action in the way that dietary sources of DGLA and EPA (e.g., borage, fish oil) reduce inflammation.[4] 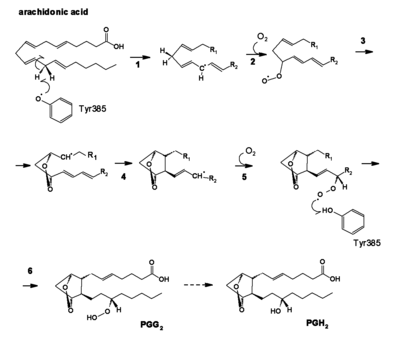 In terms of their molecular biology, COX-1 and COX-2 are of similar molecular weight, approximately 70 and 72 kDa, respectively, and having 65% amino acid sequence homology and near-identical catalytic sites. The most significant difference between the isoenzymes, which allows for selective inhibition, is the substitution of isoleucine at position 523 in COX-1 with valine in COX-2. The smaller Val523 residue in COX-2 allows access to a hydrophobic side-pocket in the enzyme (which Ile523 sterically hinders). Drug molecules, such as DuP-697 and the coxibs derived from it, bind to this alternative site and are considered to be selective inhibitors of COX-2.

The main COX inhibitors are the non-steroidal anti-inflammatory drugs (NSAIDs).

The classical COX inhibitors are not selective and inhibit all types of COX. The resulting inhibition of prostaglandin and thromboxane synthesis has the effect of reduced inflammation, as well as antipyretic, antithrombotic and analgesic effects. The most frequent adverse effect of NSAIDs is irritation of the gastric mucosa as prostaglandins normally have a protective role in the gastrointestinal tract. Some NSAIDs are also acidic which may cause additional damage to the gastrointestinal tract.

Selectivity for COX-2 is the main feature of celecoxib, rofecoxib, and other members of this drug class. Because COX-2 is usually specific to inflamed tissue, there is much less gastric irritation associated with COX-2 inhibitors, with a decreased risk of peptic ulceration. The selectivity of COX-2 does not seem to negate other side-effects of NSAIDs, most notably an increased risk of renal failure, and there is evidence that indicates an increase in the risk for heart attack, thrombosis, and stroke through an increase of thromboxane unbalanced by prostacyclin (which is reduced by COX-2 inhibition). Rofecoxib (brand name Vioxx) was withdrawn in 2004 because of such concerns. Some other COX-2 selective NSAIDs, such as celecoxib, and etoricoxib, are still on the market.

Culinary mushrooms, like Maitake, may be able to partially inhibit COX-1 and COX-2.[5][6]

A variety of flavonoids have been found to inhibit COX-2.[7]

COX-2 inhibitors have been found to increase the risk of atherothrombosis even with short-term use. A 2006 analysis of 138 randomised trials and almost 150 000 participants[8] showed that selective COX-2 inhibitors are associated with a moderately increased risk of vascular events, mainly due to a twofold increased risk of myocardial infarction, and also that high-dose regimens of some traditional NSAIDs such as diclofenac and ibuprofen are associated with a similar increase in risk of vascular events.