Diclofenac (marketed under many brand names, see below: Trade names) is a non-steroidal anti-inflammatory drug (NSAID) taken to reduce inflammation and as an analgesic reducing pain in certain conditions.

The name is derived from its chemical name: 2-(2,6-dichloranilino) phenylacetic acid.

In the United Kingdom, India, Brazil and the United States, it may be supplied as either the sodium or potassium salt, in China most often as the sodium salt, while in some other countries only as the potassium salt. Diclofenac is available as a generic drug in a number of formulations. Over-the-counter (OTC) use is approved in some countries for minor aches and pains and fever associated with common infections. 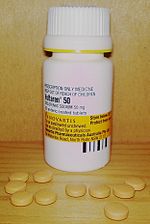 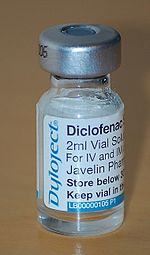 Diclofenac is used to treat pain, inflammatory disorders, and dysmenorrhea.[1]

Inflammatory disorder may include musculoskeletal complaints, especially arthritis, rheumatoid arthritis, polymyositis, dermatomyositis, osteoarthritis, dental pain, TMJ, spondylarthritis, ankylosing spondylitis, gout attacks,[2] and pain management in cases of kidney stones and gallstones. An additional indication is the treatment of acute migraines.[3] Diclofenac is used commonly to treat mild to moderate post-operative or post-traumatic pain, in particular when inflammation is also present,[2] and is effective against menstrual pain and endometriosis.

As long-term use of diclofenac and similar NSAIDs predisposes for peptic ulcer, many patients at risk for this complication are prescribed a combination (Arthrotec) of diclofenac and misoprostol, a synthetic prostaglandin analogue, to protect the gastric mucosa.[citation needed]

An external, gel-based formulation containing 3% of diclofenac (Solaraze) is available for the treatment of facial actinic keratosis caused by over-exposure to sunlight. Some countries have also approved the external use of diclofenac 1% gel to treat musculoskeletal conditions.

In many countries[where?], eye-drops are sold to treat acute and chronic non-bacterial inflammations of the anterior part of the eyes (e.g., postoperative states).[citation needed] A common brand name is Voltaren-optha.

Diclofenac is often used to treat chronic pain associated with cancer, in particular if inflammation is also present (Step I of the World Health Organization (WHO) Scheme for treatment of chronic pain). Good results (sometimes better than those with opioids) have been seen in female breast cancer and in the pain associated with bony metastases.[citation needed] Diclofenac can be combined with opioids if needed. Combaren, a fixed combination of diclofenac and codeine (50 mg each), is available for cancer treatment in Europe.[citation needed] Combinations with psychoactive drugs such as chlorprothixene and/or amitriptyline have also been investigated and found useful in a number of cancer patients.[citation needed]

Fever due to malignant lymphogranulomatosis (Hodgkin's lymphoma) often responds to diclofenac.[citation needed] Treatment can be terminated as soon as the usual treatment with radiation and/or chemotherapy causes remission of fever.

Diclofenac has been found to increase the blood pressure in patients with Shy-Drager syndrome and diabetes mellitus. Currently, this use is highly investigative and cannot be recommended as routine treatment.

Diclofenac has been found to be effective against all strains of multi drug resistant E. coli, with a MIC of 25 micrograms/mL. Therefore, it may be suggested that diclofenac has the capacity to treat uncomplicated urinary tract infections (UTI) caused by E. coli.[4] It has also been shown to be effective in treating Salmonella infections in mice[5] and is under investigation for the treatment of tuberculosis.[6]

A subsequent large study of 74,838 users of NSAIDs or coxibs, published in May 2006, found no additional cardiovascular risk from diclofenac use.[9] A very large study of 1,028,437 Danish users of various NSAIDs or coxibs, published online on June 8, 2010, found that "Use of the nonselective NSAID diclofenac and the selective cyclooxygenase-2 inhibitor rofecoxib was associated with an increased risk of cardiovascular death (odds ratio, 1.91; 95% confidence interval, 1.62 to 2.42; and odds ratio, 1.66; 95% confidence interval, 1.06 to 2.59, respectively), with a dose-dependent increase in risk." .[10]

The exact mechanism of action is not entirely known, but it is thought that the primary mechanism responsible for its anti-inflammatory, antipyretic, and analgesic action is inhibition of prostaglandin synthesis by inhibition of cyclooxygenase (COX). It also appears to exhibit bacteriostatic activity by inhibiting bacterial DNA synthesis.[16]

Inhibition of COX also decreases prostaglandins in the epithelium of the stomach, making it more sensitive to corrosion by gastric acid.[citation needed] This is also the main side-effect of diclofenac. Diclofenac has a low to moderate preference to block the COX2-isoenzyme (approximately 10-fold) and is said to have, therefore, a somewhat lower incidence of gastrointestinal complaints than noted with indomethacin and aspirin.[citation needed]

The action of one single dose is much longer (6 to 8 hours) than the very short half-life that the drug indicates.[citation needed] This could be partly because it persists for over 11 hours in synovial fluids.[17]

Diclofenac may also be a unique member of the NSAIDs. There is some evidence that diclofenac inhibits the lipoxygenase pathways,[citation needed] thus reducing formation of the leukotrienes (also pro-inflammatory autacoids). There is also speculation[by whom?] that diclofenac may inhibit phospholipase A2 as part of its mechanism of action. These additional actions may explain the high potency of diclofenac – it is the most potent NSAID on a broad basis.{Scholer. Pharmacology of Diclofenac Sodium. Am J of Medicine Volume 80 April 28, 1986}

There are marked differences among NSAIDs in their selective inhibition of the two subtypes of cyclo-oxygenase, COX-1 and COX-2.[citation needed] Much pharmaceutical drug design has attempted to focus on selective COX-2 inhibition as a way to minimize the gastrointestinal side-effects of NSAIDs like aspirin. In practice, use of some COX-2 inhibitors with their adverse effects has led to massive numbers of patient family lawsuits alleging wrongful death by heart attack, yet other significantly COX-selective NSAIDs such as diclofenac have been well-tolerated by most of the population.[citation needed]

Besides the well-known and often-cited COX-inhibition, a number of other molecular targets of diclofenac that could contribute to its pain-relieving actions have recently been identified. These include:

Recent research (2010) has linked use of Diclofenac to an increased chance of strokes.[21]

Use of diclofenac in animals has been reported to have led to a sharp decline in the vulture population in the Indian subcontinent, 95% decline in 2003,[22] 99.9% decline as of 2008. The mechanism is, it is presumed, renal failure, a known side-effect of diclofenac. Vultures eat the carcasses of livestock that have been administered veterinary diclofenac, and are poisoned by the accumulated chemical.[23] At a meeting of the National Wildlife Board in March 2005, the Government of India announced that it intended to phase out the veterinary use of diclofenac.[24] Meloxicam is a safer candidate to replace use of diclofenac.[25] It is more expensive than diclofenac, but the price is coming down as more drug companies begin to manufacture it.[26]

"The loss of tens of millions of vultures over the last decade has had major ecological consequences across the Indian subcontinent that pose a potential threat to human health. In many places, populations of feral dogs (Canis familiaris) have increased sharply from the disappearance of Gyps vultures as the main scavenger of wild and domestic ungulate carcasses. Associated with the rise in dog numbers is an increased risk of rabies"[25] and casualties of almost 50,000 people.[27] The Government of India cites one of those major consequences as a vulture species extinction.[24] A major shift in transfer of corpse pathogens from vultures to feral dogs and rats can lead to a disease pandemic causing millions of deaths in a crowded country like India; whereas vultures' digestive systems safely destroy many species of such pathogens.

The loss of vultures has had a social impact on the Indian Zoroastrian Parsi community, who traditionally use vultures to dispose of human corpses in Towers of Silence, but are now compelled to seek alternate methods of disposal.[25]

Diclofenac has been shown also to harm freshwater fish species such as rainbow trout.[29][30][31][32]

Pennsaid is a minimally systemic prescription topical lotion formulation of 1.5% w/w diclofenac sodium, which is approved in the US, Canada and other countries for osteoarthritis of the knee.

Flector Patch is a minimally systemic topical patch formulation of diclofenac. It is indicated for acute pain due to minor sprains, strains, and contusions. The patch has been approved in many other countries outside the U.S.A under different brand names.