Dimethyl sulfoxide (DMSO) is an organosulfur compound with the formula (CH3)2SO. This colorless liquid is an important polar aprotic solvent that dissolves both polar and nonpolar compounds and is miscible in a wide range of organic solvents as well as water. It penetrates the skin very readily, giving it the unusual property for many individuals of being secreted onto the surface of the tongue after contact with the skin and causing a garlic-like taste in the mouth.[2]

It was first synthesized in 1866 by the Russian scientist Alexander Zaytsev, who reported his findings in 1867. Dimethyl sulfoxide is a by-product of kraft pulping. Oxidation of dimethyl sulfide with oxygen or nitrogen dioxide gives DMSO.[3] 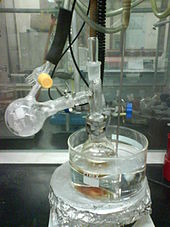 Distillation of DMSO requires a partial vacuum to achieve a lower boiling point.

DMSO is a polar aprotic solvent and is less toxic than other members of this class, such as dimethylformamide, dimethylacetamide, N-methyl-2-pyrrolidone, and HMPA. DMSO is frequently used as a solvent for chemical reactions involving salts, most notably Finkelstein reactions and other nucleophilic substitutions. It is also extensively used as an extractant in biochemistry and cell biology.[4] Because DMSO is only weakly acidic, it tolerates relatively strong bases and as such has been extensively used in the study of carbanions. A set of non-aqueous pKa values (C-H, O-H, S-H and N-H acidities) for thousands of organic compounds have been determined in DMSO solution.[5][6]

Because of its high boiling point (189 °C; 372.2 °F 462 K), DMSO evaporates slowly at normal atmospheric pressure. Samples dissolved in DMSO cannot be as easily recovered compared to other solvents, as it is very difficult to remove all traces of DMSO by conventional rotary evaporation. Reactions conducted in DMSO are often diluted with water to precipitate or phase-separate products. The relatively high freezing point (18.5 °C; 65.3 °F; 292 K) of DMSO means that at, or just below, room temperature it is a solid, which can limit its utility in some chemical processes (e.g. crystallization with cooling).

In its deuterated form (DMSO-d6), it is a useful but expensive solvent for NMR spectroscopy, again due to its ability to dissolve a wide range of analytes, its own simple spectrum, and its suitability for high-temperature NMR spectroscopic studies. Disadvantages to the use of DMSO-d6 are its high viscosity, which broadens signals, and its hygroscopicity, which leads to an overwhelming H2O resonance in the 1H NMR spectrum. It is often mixed with CDCl3 or CD2Cl2 for lower viscosity and melting points.

DMSO is finding increased use in manufacturing processes to produce microelectronic devices.[7] It is widely used to strip photoresist in TFT-LCD 'flat panel' displays and advanced packaging applications (such as wafer-level packaging / solder bump patterning). It also used in biopreservation especially stem cell banking. DMSO is an effective paint stripper, being safer than many of the others such as nitromethane and dichloromethane.

Because of its ability to dissolve many kinds of compounds, DMSO plays a role in sample management and high-throughput screening operations in drug design.[8]

The sulfur center in DMSO is nucleophilic toward soft electrophiles and the oxygen is nucleophilic toward hard electrophiles. The methyl groups of DMSO are somewhat acidic in character (pKa=35) due to the stabilization of the resultant carbanion by the S(O)R group, and so are deprotonated with strong bases like lithium diisopropylamide and sodium hydride. The sodium salt of DMSO formed in this way (sometimes referred to as "dimsyl sodium") is a useful base, e.g. it is often used for the deprotonation of ketones to form sodium enolates, phosphonium salts to form Wittig reagents, and formamidinium salts to form diaminocarbenes.

DMSO reacts with methyl iodide to form trimethylsulfoxonium iodide, [(CH3)3SO]I, which can be deprotonated with sodium hydride to form the sulfur ylide:

In organic synthesis, DMSO is used as a mild oxidant,[9] as illustrated by the Pfitzner-Moffatt oxidation and the Swern oxidation.[10]

DMSO is a common ligand in coordination chemistry. The complex dichlorotetrakis(dimethyl sulfoxide)ruthenium(II), RuCl2(dmso)4, features DMSO bonded to ruthenium through sulfur and through oxygen.

DMSO is used in PCR to inhibit secondary structures in the DNA template or the DNA primers. It is added to the PCR mix before reacting, where it interferes with the self-complementarity of the DNA, minimizing interfering reactions.[11]

DMSO may also be used as a cryoprotectant, added to cell media to prevent cell death during the freezing process.[12] Approximately 10% may be used with a slow-freeze method, and the cells may be frozen at -80°C or stored in liquid nitrogen safely.

Use of DMSO in medicine dates from around 1963, when an Oregon Health & Science University Medical School team, headed by Stanley Jacob, discovered it could penetrate the skin and other membranes without damaging them and could carry other compounds into a biological system. In medicine, DMSO is predominantly used as a topical analgesic, a vehicle for topical application of pharmaceuticals, as an anti-inflammatory, and an antioxidant.[13] Because DMSO increases the rate of absorption of some compounds through organic tissues, including skin, it can be used as a drug delivery system. It is frequently compounded with antifungal medications, enabling them to penetrate not just skin but also toe and fingernails.

In cryobiology DMSO has been used as a cryoprotectant and is still an important constituent of cryoprotectant vitrification mixtures used to preserve organs, tissues, and cell suspensions. Without it, up to 90% of frozen cells will become inactive. It is particularly important in the freezing and long-term storage of embryonic stem cells and hematopoietic stem cells, which are often frozen in a mixture of 10% DMSO, Media and 30% fetal bovine serum. In the cryogenic freezing of heteroploid cell lines (MDCK, VERO, etc.) a mixture of 10% DMSO with 90% EMEM (70% EMEM + 30% fetal bovine serum + antibiotic mixture) is used. As part of an autologous bone marrow transplant the DMSO is re-infused along with the patient's own hematopoietic stem cells.

In a 1978 study at the Cleveland Clinic Foundation in Cleveland, Ohio, researchers concluded that DMSO brought significant relief to the majority of the 213 patients with inflammatory genitourinary disorders that were studied.[14] They recommended DMSO for all inflammatory conditions not caused by infection or tumor in which symptoms were severe or patients failed to respond to conventional therapy.

DMSO has been examined for the treatment of numerous conditions and ailments, but the U.S. Food and Drug Administration (FDA) has approved its use only for the symptomatic relief of patients with interstitial cystitis.

In interventional radiology, DMSO is used as a solvent for Ethylene Vinyl Alcohol in the Onyx liquid embolic agent, which is used in embolisation, the therapeutic occlusion of blood vessels.

DMSO is commonly used in veterinary medicine as a liniment for horses, alone or in combination with other ingredients. In the latter case, often, the intended function of the DMSO is as a solvent, to carry the other ingredients across the skin. Also in horses, DMSO is used intravenously, again alone or in combination with other drugs. It is used alone for the treatment of increased intracranial pressure and/or cerebral edema in horses.

DMSO by itself has low toxicity.[15]

On September 9, 1965, the Wall Street Journal reported that a manufacturer of the chemical warned that the death of an Irish woman after undergoing DMSO treatment for a sprained wrist may have been due to the treatment, although no autopsy was done, nor was a causal relationship established.[16] Clinical research using DMSO halted and did not begin again until the National Academy of Sciences (NAS) published findings in favor of DMSO in 1972.[17] In 1978, the U.S. FDA approved DMSO for treating interstitial cystitis. In 1980, the U.S. Congress held hearings on claims that the FDA was slow in approving DMSO for other medical uses. In 2007, the U.S. FDA granted "fast track" designation on clinical studies of DMSO's use in reducing brain tissue swelling following traumatic brain injury.[17]

DMSO exposure to developing mouse brains can produce brain degeneration.[18] This neurotoxicity could be detected at doses as low as 0.3 mL/kg, a level exceeded in children exposed to DMSO during certain medical treatments.

Glove selection is important when working with DMSO. Thick rubber gloves are recommended. Nitrile gloves, which are very commonly used in chemical laboratories, have been found to dissolve rapidly with exposure to DMSO.[19] Because DMSO easily penetrates the skin, substances dissolved in DMSO may be quickly absorbed. For instance, a solution of sodium cyanide in DMSO can cause cyanide poisoning through skin contact.[citation needed] Dimethyl sulfoxide can produce an explosive reaction when exposed to acid chlorides; at a low temperature, this reaction produces the oxidant for Swern oxidation.