Prostaglandin-endoperoxide synthase 2, also known as cyclooxygenase-2 or simply COX-2, is an enzyme which in humans is encoded by the PTGS2 gene.[1]

COX-2 was discovered in 1991 by the Daniel Simmons laboratory[2] at Brigham Young University.

COX-2 exists as a homodimer, each monomer has a molecular mass of about 70kDa. The tertiary and quaternary structures of COX-1 and COX-2 enzymes are almost identical. Each subunit has three different structural domains: a short N-terminal epidermal growth factor (EGF) domain; an α-helical membrane-binding moiety; and a C-terminal catalytic domain. COX enzymes are monotopic membrane proteins; the membrane-binding domain consists of a series of amphipathic α helices with several hydrophobic amino acids exposed to a membrane monolayer. COX-1 and COX-2 are bifunctional enzymes that carry out two consecutive chemical reactions in spatially distinct but mechanistically coupled active sites. Both the cyclooxygenase and the peroxidase active sites are located in the catalytic domain, which accounts for approximately 80% of the protein. The catalytic domain is homologous to mammalian peroxidases such as myeloperoxidase.[3][4] 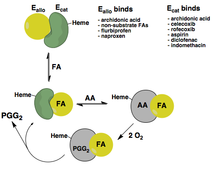 It has been found that human PGHS-2 functions as a conformational heterodimer having a catalytic monomer (E-cat) and an allosteric monomer (E-allo). Heme binds only to the peroxidase site of E-cat while substrates, as well as certain inhibitors (e.g. celecoxib), bind the COX site of E-cat. E-cat is regulated by E-allo in a way dependent on what ligand is bound to E-allo. Substrate and non-substrate fatty acid (FAs) and some COX inhibitors (e.g. naproxen) preferentially bind to the COX site of E-allo. AA can bind to E-cat and E-allo, but the affinity of AA for E-allo is 25 times that for Ecat. Palmitic acid, an efficacious stimulator of huPGHS-2, binds only E-allo in palmitic acid/murine PGHS-2 co-crystals. Non-substrate FAs can potentiate or attenuate COX inhibitors depending on the fatty acid and whether the inhibitor binds E-cat or E-allo. Studies suggest that the concentration and composition of the free fatty acid pool in the environment in which PGHS-2 functions in cells, also referred to as the FA tone, is a key factor regulating the activity of PGHS-2 and its response to COX inhibitors.(Figure 1)[5]

Figure 2. COX enzymes produce PGH2 from AA in two consecutive chemical reactions. PGH2 is converted to other prostanoids (at the bottom) by tissue-specific enzymes called isomerases. In the first step of the reaction two moles of oxygen are added to arachidonic acid to yield PGG2. This is referred to as the COX reaction. The latter is followed by the peroxidase reaction, which reduces PGG2 to give PGH2. The COX reaction and the peroxidase reaction occur at two different locations in COX enzymes. In addition to prostaglandins, COX enzymes also produce small amounts of mono-oxygenated metabolites of AA called HETEs.

Prostaglandin endoperoxide H synthase, COX 2, converts arachidonic acid (AA) to prostaglandin endoperoxide H2. PGHSs are targets for NSAIDs and COX-2 specific inhibitors called coxibs. PGHS-2 is a sequence homodimer. Each monomer of the enzyme has a peroxidase and a COX active site. The COX enzymes catalyze the conversion of arachidonic acid to prostaglandins in a two steps. Firstly, hydrogen is abstracted from carbon 13 of arachidonic acid, and then two molecules of oxygen are added by the COX-2, giving PGG2. Secondly, PGG2 is reduced to PGH2 in the peroxidase active site. The synthesized PGH2 is converted to prostaglandins (PGD2, PGE2, PGF2R), prostacyclin (PGI2), or thromboxane A2 by tissue-specific isomerases.(Figure 2)[6] 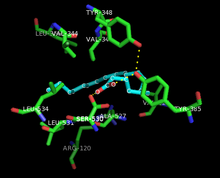 Arachidonic acid bound to the COX-2 enzyme. polar interactions between Archidonic Acid (cyan) and Ser-530 and Tyr-385 residues are shown with yellow dashed lines. The substrate is stabilized by hydrophobic interactions.[10]

The conversion of arachidonic acid to PGG2 can be shown as a series of radical reactions analogous to polyunsaturated fatty acid autoxidation (Figure 3.).[11] The 13-pro(S) -hydrogen is abstracted and dioxygen traps the pentadienyl radical at carbon 11. The 11-peroxyl radical cyclizes at carbon 9 and the carbon-centered radical generated at C-8 cyclizes at carbon 12, generating the endoperoxide. The allylic radical generated is trapped by dioxygen at carbon 15 to form the 15-(S) -peroxyl radical; this radical is then reduced to PGG2 . This is supported by the following evidence: 1) a significant kinetic isotope effect is observed for the abstraction of the 13-pro (S )-hydrogen ; 2) carbon-centered radicals are trapped during catalysis;[12] 3) small amounts of oxidation products are formed due to the oxygen trapping of an allylic radical intermediate at positions 13 and 15.[13][14] Another mechanism shown in Figure 4 in which the 13-pro (S )-hydrogen is deprotonated and the carbanion is oxidized to a radical is theoretically possible. Although, oxygenation of 10,10-difluoroarachidonic acid to 11-(S )-hydroxyeicosa-5,8,12,14-tetraenoic acid is not consistent with the generation of a carbanion intermediate because the it would eliminate fluoride to form a conjugated diene.[15] The absence of endoperoxide-containing products derived from 10,10-difluoroarachidonic acid has been thought to indicate the importance of a C-10 carbocation in PGG2 synthesis.[16] However, the cationic mechanism requires that endoperoxide formation comes before the removal of the 13-pro (S )-hydrogen. This is not consistent with the results of the isotope experiments of arachidonic acid oxygenation.[17] 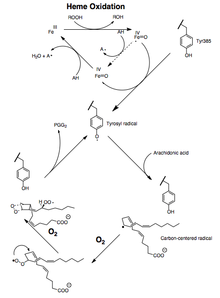 Figure 3. Mechanism of COX activation and catalysis. A hydroperoxide oxidizes the heme to a ferryl-oxo derivative that is either reduced in the first step of the peroxidase cycle or it can oxidize Tyrosine 385 to a tyrosyl radical. The tyrosyl radical can then oxidize the 13-pro(S) hydrogen of arachidonic acid to initiate the COX cycle.

Cyclooxygenase-2 (COX-2, prostaglandin H synthase-2, PGHS-2) is unexpressed under normal conditions in most cells, but elevated levels are found during inflammation. COX-1 (prostaglandin H2 synthase 1) is constitutively expressed in many tissues and is the predominant form in gastric mucosa and in the kidneys. Inhibition of COX-1 reduces the basal production of cytoprotective PGE2 and PGI2 in the stomach, which may contribute to gastric ulceration. Since COX-2 is generally expressed only in cells where prostaglandins are upregulated (e.g. during inflammation), drug-candidates that selectively inhibit COX-2 are thought to show fewer side effects.[4]

Non-steroidal anti-inflammatory drugs (NSAIDs) inhibit prostaglandin production by cyclooxygenases (COX) 1 and 2. NSAIDs selective for inhibition of COX-2 are less likely than traditional drugs to cause gastrointenstinal adverse effects, but could cause cardiovascular events, such as heart failure, myocardial infarction, and stroke. Studies with human pharmacology and genetics, genetically manipulated rodents, and other animal models and randomized trials indicate that this is due to suppression of COX-2-dependent cardioprotective prostaglandins, prostacyclin in particular.[18] 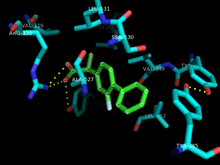 The expression of COX-2 is upregulated in many cancers. The overexpression of COX-2 along with increased angiogenesis and GLUT-1 expression is significantly associated with gallbladder carcinomas.[20] Furthermore the product of COX-2, PGH2 is converted by prostaglandin E2 synthase into PGE2 which in turn can stimulate cancer progression. Consequently inhibiting COX-2 may have benefit in the prevention and treatment of these types of cancer.[21][22]

The mutant allele PTGS2 5939C carriers among the Han Chinese population have been shown to have a higher risk of gastric cancer. In addition, a connection was found between Helicobacter pylori infection and the presence of the 5939C allele.[23]

PTGS2 has been shown to interact with Caveolin 1.[24]