The following outline is provided as an overview of and topical guide to neuroscience:

Neuroscience – an interdisciplinary science that studies the nervous system.[1] 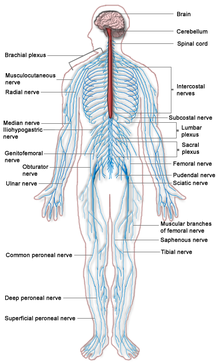 The nervous system is an organ system containing a network of specialized cells called neurons that coordinate the actions of an animal and send signals between different parts of its body.

Principal regions of the vertebrate brain:

A neuron (also known as a neurone or nerve cell) is an excitable cell in the nervous system that processes and transmits information by electrochemical signaling. Neurons are the core components of the brain, spinal cord, and peripheral nerves.

An action potential (or nerve impulse) is a transient alteration of the transmembrane voltage (or membrane potential) across the membrane in an excitable cell generated by the activity of voltage-gated ion channels embedded in the membrane. The best known action potentials are pulse-like waves that travel along the axons of neurons.

Synapses are specialized junctions through which neurons signal to each other and to non-neuronal cells such as those in muscles or glands.

Neurotransmitters are endogenous chemicals that relay, amplify, and modulate signals between neurons and other cells to which they are synaptically connected.

Neural development comprises the processes that generate, shape, and reshape the nervous system, from the earliest stages of embryogenesis to the final years of life.

A sensory system is a part of the nervous system responsible for processing sensory information. A sensory system consists of sensory receptors, neural pathways, and parts of the brain involved in sensory perception.

Motor control comprises the activities carried out by the nervous system that organize the musculoskeletal system to create coordinated movements and skilled actions.

The term "cognition" refers to the activities involved in processing information, applying knowledge, and changing preferences. Cognition, or cognitive processes, can be natural or artificial, conscious or unconscious.

Arousal is a physiological and psychological state of being awake or reactive to stimuli.

Neuroscience is the scientific study of the nervous system. Traditionally, neuroscience has been seen as a branch of biology. Currently it has become an interdisciplinary science that involves other disciplines such as cognitive and neuro-psychology, computer science, statistics, physics, philosophy, and medicine.

Neurophysiology is the study of the function (as opposed to structure) of the nervous system.

Neuroanatomy is the study of the anatomy of nervous tissue and neural structures of the nervous system.

Neuropharmacology is the study of how drugs affect cellular function in the nervous system.

Behavioral neuroscience, also known as biological psychology, biopsychology, or psychobiology, is the application of the principles of biology to the study of mental processes and behavior in human and non-human animals.

Cognitive neuroscience is concerned with the scientific study of biological substrates underlying cognition, with a focus on the neural substrates of mental processes.

Systems neuroscience is a subdiscipline of neuroscience which studies the function of neural circuits and systems. It is an umbrella term, encompassing a number of areas of study concerned with how nerve cells behave when connected together to form neural networks.

Molecular neuroscience is a branch of neuroscience that examines the biology of the nervous system with molecular biology, molecular genetics, protein chemistry and related methodologies.

Computational neuroscience includes both the study of the information processing functions of the nervous system, and the use of digital computers to study the nervous system. It is an interdisciplinary science that links the diverse fields of neuroscience, cognitive science and psychology, electrical engineering, computer science, physics and mathematics.

Neurology is the medical specialty dealing with disorders of the nervous system. It deals with the diagnosis and treatment of all categories of disease involving the central, peripheral, and autonomic nervous systems.

Neuropsychology studies the structure and function of the brain related to psychological processes and behaviors. The term is used most frequently with reference to studies of the effects of brain damage in humans and animals.