This is an incomplete list of areas with either multilingualism at the community level or at the personal level.

There is a distinction between social and personal bilingualism. Many countries, such as Belgium, India, South Africa and Switzerland which are officially multilingual, may have many monolinguals in their population. Officially monolingual countries, on the other hand, such as France, Venezuela, Saudi Arabia and Australia can have sizable multilingual populations. And some countries have official languages but have regional and local official languages, notably the UK, Russia, China and Mexico. 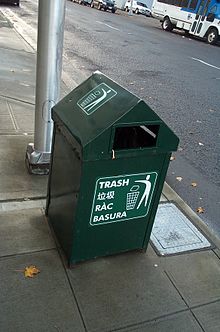 A trash can in Seattle labeled in four languages: English, Chinese (垃圾), Vietnamese (should be rác), and Spanish. Tagalog also uses the Spanish word.

There are many more cities of multi-lingual speakers where multilingualism a part of everyday life.