Albany (formerly Ocean View) is a city in Alameda County, California, United States. The population was 18,539 at the 2010 census.

In 1908, a group of local women protested the dumping of Berkeley garbage in their community. Armed with two shotguns and a twenty-two-caliber rifle, they confronted the drivers of the wagons near what is now the corner of San Pablo Avenue and Buchanan Street. The women told the drivers of the horse-drawn garbage wagons to go home, which they did quickly and without complaint. Shortly thereafter, the residents of the town voted to incorporate as the City of Ocean View. In 1909, voters changed the name of the city, primarily to distinguish the city from the adjacent section of Berkeley which had previously been named Ocean View. On a vote of 38 to 6 the city was renamed in honor of Albany, New York, the birthplace of the city's first mayor, Frank Roberts. [2]

The principal shopping street in Albany is Solano Avenue, which cuts across the city from west to east. Another important street is San Pablo Avenue, which travels from north to south.

Albany is located on the eastern shore of San Francisco Bay, bordering the city of Berkeley to the south and east, and the Contra Costa County cities of El Cerrito and Richmond to the north. Albany's northern and southern borders are defined by two creeks, Codornices Creek on the south and Cerrito Creek on the north. Cerrito Creek takes its name from "El Cerrito de San Antonio", now known as Albany Hill. The hill's unusual location near the bay shore makes it a prominent landmark in the East Bay. The rest of the city is relatively flat by Bay Area standards, except for a small area near the base of the Berkeley Hills.

Albany's waterfront has undergone significant man-made changes; the most prominent landform is now the Albany Bulb, a former garbage landfill jutting out into San Francisco Bay. The bulb was the site of a small art colony and shanty town until it was cleared to turn the area into part of the new Eastshore State Park.[3][4][5]

University Village, a housing unit of the University of California Berkeley, is located in Albany.[6]

A bayside view of the Golden Gate Bridge from Albany.

The major retail and business areas in Albany are Solano Avenue, which is a pedestrian-oriented street lined with mainly small shops, restaurants, and services; San Pablo Avenue, which is more automobile-oriented; and an area near the Eastshore Freeway, which the city is trying to attract big-box stores and offices, and currently houses a two-story Target store.

Albany is the site of Golden Gate Fields, the only horse racing track in the Bay Area. 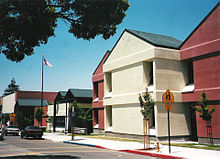 Public schools in Albany are operated by the Albany Unified School District, a special-purpose district whose borders match the city's. The school district operates three elementary schools, one middle school, one traditional high school, and one continuation high school, in addition to an adult school. Albany High School is known as one of the best public schools of the San Francisco Bay Area for its academic excellence. The high school had a graduation rate of 92.1%, according to the 2009-10 School Accountability Report Card for the prior academic year.[9]

The University of California, Berkeley owns a large student housing complex in Albany, University Village, which is primarily used for family housing.

The Solano Stroll, an annual street festival held on Solano Avenue in Albany and Berkeley, attracts more than 250,000 visitors on the second Sunday of September. The event was started in 1975 by The Iris store owner and Solano Avenue Association founder Ira Klein as a "thank you party" from Solano Avenue business owners to customers.[10] The Library of Congress designated the Solano Stroll as a "National Local Legacy" in 2001.[10]

Albany also has a large little league, which draws children from around the area. The Albany Little League has gone to state tournaments with their junior and Majors levels. In 2008, Albany won its first championship in the Little League.

Albany is home to Golden Gate Fields, the only commercial racetrack in the Bay Area, as well as a the Eastshore State Park which skirts the San Francisco Bay, and the Albany Bulb.

Albany also boasts its very advanced school music program. High school music groups, both instrumental and choral, have performed in at least a superior manner at the CMEA, Reno Jazz, and other festivals. The Albany High School Jazz Band was also accepted the Essentially Ellington festival at the Lincoln Center in New York, New York in 2010. Albany was one of 15 schools accepted into the festival.

Friends of Five Creeks is an all-volunteer group working hands-on for clean water and healthy watersheds.

The Albany Strollers & Rollers group was founded in 2004 to address safety hazards to bicyclists in the Albany area and to improve bicycle awareness.