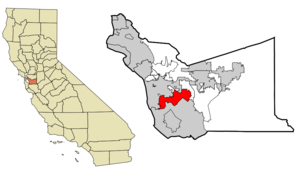 mapsize = 250x200px
map_caption = Location in Alameda County and the state of

Union City is a city in Alameda County, , . As of the 2000 census, the current population is about Appox 73,000. It was incorporated in 1959, combining the communities of Alvarado and Decoto. Alvarado was the original county seat of Alameda County, and the site of the first county courthouse is a (#503).

The San Francisco Bay Area Memorial is in Sugar Mill Landing Park. It is the first completed monument in the United States designed specifically to honor the passengers and crew of , which was bound for , but was hijacked and crashed in rural on September 11, 2001.

Union City is served by the [http://www.nhusd.k12.ca.us/NHUSD_css/index.html New Haven Unified School District] . Union City is home to one main High school , the most populous high school Northern California with over 3,800 students and one comingle Continuation High school, Alternative High School on the border between Union City/Hayward both these school are join by [http://www.nhusd.k12.ca.us/adult/adult.html New Haven Adult school] for Adult Education and [http://www.mvrop.org/web/index.html Mission Valley ROP ] a provider of career training for high tech, high pay and high demand fields! In existence for more than thirty-five years, MVROP operates under a partnership with Fremont, New Haven, and Newark Unified School Districts.

*Smith Street runs through the historic Old Alvarado district of Union City which sits on the west side of Union City on Smith Street and Union City Blvd. and has array of small commercial business, retail shops, and eateries. The Caesar Chavez Park is just adjacent.Along Smith Street and Watkins Avenue are historical Victorian homes, a small town post office, the Union City Historical Museum and the Loyola Commercial Building. Old Alvarado merchants produce events such as the Fall Festival, Friday night Jazz bands, Art shows, and the Farmers Market every weekend.

*Alvarado Niles road, runs through East side of Union CIty along with Decoto Road anthor major street on the Eastside of the city and is the one of Union City Largest street .Alvarado Niles road is home to many business,Business Parks,Parks,Neighborhoods Retail, Restaurants ,Civic Center,Union City Library which is part of the Alameda County Library system, Nakamura Clinic which is part of Washington Hospital’s Clinics,* [http://www.nhusd.k12.ca.us/Chavez/CCMS_Site/chavez2 Cesar Chavez Middle School] ,* which is Union City only public comprehensive 9-12 high school with over 3,800 students and is the Lagest high school in the San Francisco Bay and Northern California.

The Four Corners are located on the west side of Union City on Dyer Street and Alvarado Boulevard Major stores include: Seafood city, Ride Aid, banks, fast foods places, drive in Starbucks, and many other small retail stores.

Costco Wholesale warehouse and a 24 Hour Fitness facility on the Hayward/Union City border to be build at the intersection of Hesperian and Industrial boulevards he Costco could open as early as next summer, the gym next fall.The facilities would both be brand new. Description of the Costco sounded like it would have all the amenities of the San Leandro store, plus a discount gas filling station. The 24 Hour Fitness would be a deluxe model, packing a full-sized basketball court and 25-meter swimming pool.

The [http://www.nhusd.k12.ca.us/NHUSD_css/index.html New Haven Unified School District] serves approximately 12,000 kindergarten through 12th-grade students at 12 schools in Union City and south Hayward, in the San Francisco Bay Area. The District also serves approximately 2,500 students at the New Haven Adult School.New Haven Unified was created in 1965, with the merger of the Alvarado and Decoto school districts and a portion of the Washington Union High School District. The District is made up of seven K-5 elementary schools: Alvarado, Eastin, Emanuele, Hillview Crest, Kitayama, Pioneer and Searles;one Home school,one Indepent Study program, two 6-8 middle schools: Alvarado and Cesar Chavez; and two 9-12 high schools: James Logan as the main,and Conley-Caraballo, which serves alternative education and continuation students. [http://www.nhusd.k12.ca.us/NHUSD_css/index.html New Haven Unified School District] are proud of the accomplishments of our diverse student population which is 75% minority. All of our schools have been recognized as "Distinguished Schools" by the state of California and we have received five federal "Blue Ribbon" awards.The district's motto of Equity, Stability, and Quality symbolizes our commitment to provide the finest education possible for every student.

Union City is served by (Nimitz Freeway) and SR 238 (Mission Boulevard). Public transportation is served by rapid transit system with the ,*.the local bus system (originally The Flea) which serves the entire city, with mainline bus services,which is supplemented by . It is also served by , running from the BART station across the Dumbarton Bridge to Palo Alto.

Officials with , and the city of , held ceremonies for the new multimodal passenger facility on . The project includes a conversion to solar power generation for the station's energy needs, which could make it the first station in the to be powered by . The construction is expected to cost $100 million and be completed in 2015. [cite journal| journal=Trains Magazine| pages=p 23| title=BART builds solar-powered rail station| month=February| year=2008| volume=68| issue=2| issn=0041-0934 ]

(Nimitz Freeway) and SR 238 (Mission Boulevard) runs through Union City East and West side of town and connects you with Union Landing, for Local shopping and the Alvarado,Decoto Districts as well as other amendies the 3/4 exits into Union City:Fremont Boulevard North, Alvarado Boulevard,Alvarado Niles Road,Whipple Road, Dyer Street,Decoto Road East.

Union city,Fremont,Newark the Tri-Cities has a daily newspaper called the which is part of the of newspapers in the Bay Area.

Nearby Hayward also has daily newspaper called the , part of the Alameda Newspaper Group of newspapers in the Bay Area. Local television stations, AM and FM radio from Oakland and San Francisco reach Union City , and stations from San Jose, Sacramento and Salinas reach Hayward as well, as well as cable carrier, Comcast

The , is the Bay Area and Northern California's most widely circulated newspaper.