Livermore (formerly Livermores, Livermore Ranch, and Nottingham)[5] is a city in Alameda County. The population as of 2010 was 80,968. Livermore is located on the eastern edge of California's San Francisco Bay Area.

Traditionally, Livermore is considered the easternmost city in the Bay Area before entrance to the Central Valley. Livermore was founded by William Mendenhall and named after Robert Livermore, his friend and a local rancher who settled in the area in the 1830s. Livermore is the home of the Lawrence Livermore National Laboratory. Its south side, home to local vineyards, has developed several executive subdivisions near Ruby Hill. The city has also redeveloped its downtown district. The city is considered part of the Tri-Valley area, including Amador, Livermore and San Ramon Valleys.

Watercourses draining the city of Livermore include Arroyo Mocho, Arroyo del Valle, Arroyo Seco and Arroyo Las Positas. The principal aquifer underlying the city is the Mocho Subbasin. According to the United States Census Bureau, the city has a total area of 25.2 square miles (65 km2), over 99% of it land. Several local seismic areas of activity lie near the city including the Greenville Fault and the Tesla Fault. 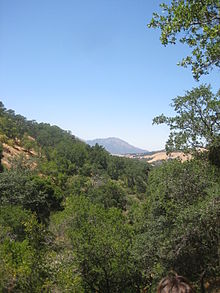 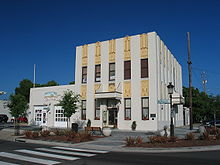 This is a picture of a stagecoach, similar to those used in Livermore in the 1800s. Livermore, California as of 24 February 2010

Before its incorporation under the Roman Catholic Mission San Jose in 1796 and prior to the arrival of the Spanish in the 18th century, the Livermore area was home to the Ohlone (or Costanoan) native people. The Livermore-Amador Valley was primarily used as grazing land for Mission San Jose's thousands of cattle and sheep until secularization of California missions from 1834 to 1837 opened great amounts of land throughout California for Mexican land grants. The fourth and second largest of these land grants were the Rancho Las Positas grant, made to rancher Robert Livermore, a naturalized Mexican citizen of English birth, and Jose Noriega in 1839. Robert Livermore was as much interested in viticulture and horticulture as he was in cattle and horses. In 1846 he was the first in the area to plant both vineyards as well as orchards of pears and olives. The first building on his ranch was an adobe on Las Positas Creek. In 1849 a two-story "Around the Horn" house was added and was believed to be the first wooden building in the valley.

After the discovery of gold in California, Livermore became a popular 'first day' stopping point for prospectors headed for the Mother Lode country. It was usually one day's journey by horse or stagecoach when starting from San Jose, California.

Robert Livermore died in 1858 before the establishment of the town that bears his name. His ranch included much of the present-day city. The city itself was established in 1869 by William Mendenhall, who had met Robert Livermore while marching through the valley with Fremont's California Battalion. Livermore was officially incorporated on April 15, 1876. During Livermore's early years, it was also quite well known for the many large hotels that graced the downtown streetcorners, before new buildings replaced them. Livermore is also notable for the Italian families that played a role in the formation of its wineries. Since it has a Mediterranean climate, the Italian families found it a good location to grow wine grapes, which also helped contribute to the development of the early city.

In 1942, the U. S. Government bought 692 acres (2.80 km2) of ranch land, bounded by Vasco and Greenville Roads and East Avenue, and built the Livermore Naval Air Station. This facility operated until it was decommissioned in 1946. In 1952, the government established Lawrence Livermore National Laboratory on the site.[8] 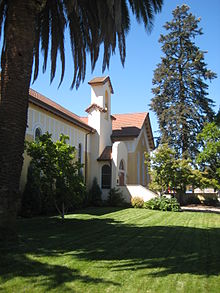 Livermore's culture retains some vestiges of the farming and ranching traditions that have existed in the valley since the time of Robert Livermore, but now largely reflects a suburban population. This culture was documented in the photoessay Suburbia in 1973 by then native photographer Bill Owens, with the photos shown in numerous exhibits.[9] Livermore has a strong blue-collar element, as well as many professionals who work at the Lawrence Livermore National Laboratory and the high tech industries within the Bay Area. Recent housing development has included the addition of hundreds of million dollar homes set amongst the southside's vineyards as well as a multi-million dollar renovation of the downtown area. The renovations included the Livermore Cinemas, the Bankhead Theatre, a parking structure, and office buildings. There is a state-of-the-art library (with a controversial front mosaic[10] by Maria Alquilar) that opened in 2004 and the Livermore Airport.

Arts organizations supported by the city include the Livermore-Amador Symphony, Del Valle Fine Arts, producer of classical music events, and in the valley at large, the Valley Concert Chorale, Livermore Valley Opera and the Valley Dance Theatre, a classical ballet company. Since 1918 Livermore has hosted the Livermore Rodeo,[13] called the "World's Fastest Rodeo," that claims it has more riders per hour than any other event of its type. 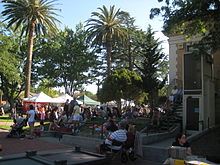 Camp Wonder opened its first summer camp for children with special medical needs in Livermore in 2001.

One of the largest districts is Springtown, the northeast area of the city north of Interstate 580. Originally conceived as a retirement community in the early 1960s, Springtown has many of the city's hotels and a public golf course.

The downtown, or Central district has two movie theaters, a community theater, and space for open air concerts.

The North Livermore district is North of the Union Pacific Railroad that cuts through the Downtown.

The South Livermore district has over 40 wineries.

The Livermore Police Department (LPD) was established in 1876, at that time the only law enforcement agency in the San Francisco Bay Area besides the San Francisco Police Department. The current Chief of Police is Steve Sweeney. In July 2008, LPD opened its first substation in New Downtown Livermore, known as the Central Station or Downtown Office. The LPD has had the best S.W.A.T. Team in Northern California, due to the team winning the Northern California S.W.A.T Competition.[citation needed]

There were 26,123 households out of which 40.2% had children under the age of 18 living with them, 61.1% were married couples living together, 9.3% had a female head of household with no husband present, and 25.3% were non-families. 18.8% of all households were made up of individuals and 5.4% had someone living alone who was 65 years of age or older. The average household size was 2.80 and the average family size was 3.20.

Livermore has the highest percentage of registered Republicans of any of the cities in Alameda County. 35.2% of its 45,519 registered voters are Republicans, while 39.7% are Democrats, and 20.7% are Decline to State voters.[16]

The city is noted for one world record. A 110+ year old 4-watt light bulb, called the Centennial Light, housed in the Livermore-Pleasanton Fire Department main station, is still burning. It glows dimly, but still functions as a light bulb.[17] The Guinness Book of World Records, Ripley's Believe It or Not, and General Electric have concluded that the bulb has been burning continuously since 1901 with the exception of power failures and three times it was disconnected for moves to new stations. The light bulb was manufactured by the Shelby Electric Company and was hand blown with a carbon filament. 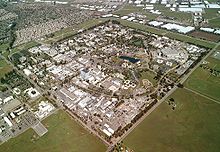 Livermore is the home of two DOE National Laboratories. The laboratories are known worldwide, and attract significant attention both for their scientific research and for their major roles in developing the United States nuclear arsenal.

The largest employer in Livermore is the Lawrence Livermore National Laboratory (LLNL), a federally funded research and development center funded by the Department of Energy which is operated by a limited liability consortium named Lawrence Livermore National Security, LLC (LLNS), a joint venture company of Bechtel National, the University of California, BWX Technologies, Washington Group International, and Battelle. The lab is the location of the supercomputer Blue Gene/L.

LLNL is the location of the world's most powerful laser, the National Ignition Facility (NIF), a project designed to create the first sustained, controlled nuclear fusion reaction, which would generate fusion power, a potential energy source.

Livermore is also the California site of Sandia National Laboratories, which is operated by Sandia Corporation, a Lockheed-Martin owned Company.

The two National Laboratories, along with other stakeholders, including the University of California, Berkeley, UC Davis, and regional cities, partnered to create the i-GATE (Innovation for Green Advanced Transportation Excellence) National Energy Systems Technology (NEST) Incubator. The 15,000-square-foot (1,400 m2) i-GATE NEST campus was created to stimulate large-scale, high-tech business development around the two labs. Initial focus of the campus will be solar energy, fuel cells, biofuels, LED lighting, and other related technologies.[18][19]

According to the City's 2010 Comprehensive Annual Financial Report,[21] the top private sector employers in the city are:

Livermore's largest employer, Lawrence Livermore Laboratories, is not included in this list, as it is federally funded, and not a private sector employer.

The Hertz Foundation for scholarships is based in Livermore.

Interstate 580 is Livermore's primary freeway. Linking the rest of the San Francisco Bay Area to the west, I-580 passes through Livermore before it heads east through the Altamont Pass to the Central Valley. Highway 84 heads southwest from I-580 to Fremont. Vasco Road, an unnumbered highway that is maintained by Alameda and Contra Costa Counties, connects Livermore to Brentwood, California and the Sacramento – San Joaquin River Delta area.

Livermore Municipal Airport, a general aviation airport, is located there.

The WHEELS bus system operates in Livermore and to the neighboring cities of Pleasanton and Dublin.

Livermore has two stations for the Altamont Commuter Express (ACE), a commuter train which runs from Stockton to San Jose. One station is at Vasco Road, and the other in downtown Livermore at its Transit Center, which also connects to the WHEELS bus system.

There is a petition drive to bring the Bay Area Rapid Transit system to Livermore.The group that started the petition was founded by the former mayor of Dublin, Linda Jeffery Sailors, who was successful in extending BART to Dublin/Pleasanton, currently the closest station to Livermore.[25] If BART does come to Livermore, the system would connect to the ACE Train.

Radio station KKIQ is licensed in Livermore and broadcasts in the Tri-City area.

Print and film resources on Livermore