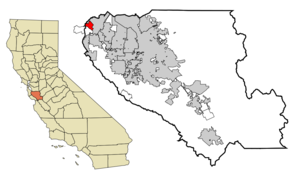 Stanford is an of Santa Clara County and is adjacent to the city of Palo Alto. Stanford, California is a valid postal address, and has its own post office and ZIP codes: 94305 (campus buildings) and 94309 (post-office boxes). A popular site to see/hike in Stanford is the Dish.

The CDP of Stanford is mostly made up of . Its resident population consists of the inhabitants of on-campus housing, including graduate student villages and the "Faculty Ghetto" of single-family homes owned by their faculty inhabitants but located on leased Stanford land. A residential neighborhood adjacent to the Stanford campus, College Terrace, featuring streets named after universities and colleges, including Oxford, Harvard, Columbia, Yale, Princeton, Cornell, and Amherst, is not part of the Stanford CDP but of the city of Palo Alto.

There were 3,207 households out of which 17.9% had children under the age of 18 living with them, 38.7% were married couples living together, 1.8% had a female householder with no husband present, and 58.5% were non-families. 23.0% of all households were made up of individuals and 2.5% had someone living alone who was 65 years of age or older. The average household size was 2.22 and the average family size was 2.73.