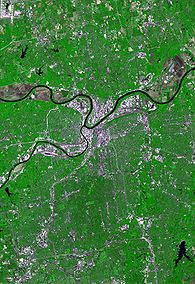 In 2007, Worldwide ERC and Primary Relocation recognized Kansas City third overall as one of the "Best Cities for Relocating Families" in the United States. Also in 2010, Money Magazine rated Overland Park, Kansas, the 7th best city to live in the United States.[1] Neighboring city Olathe, Kansas, was rated 11th, Lee's Summit, Missouri 27th best, and Shawnee, Kansas, 39th best. Kansas City is one of two metro areas to have two cities in the top fifteen.[2]

The Kansas City Metropolitan Area can be visualized roughly by the following divisions:

Northland refers to all that portion of the metro area within Missouri and located north of the Missouri River. The Northland is largely suburban in character with industrial uses and pre-World War II development along the Missouri River. Places in the Northland are commonly referred to as being "north of the river" (Missouri River). Sometimes the area is referred to as "Kansas City North", which should not be confused with "North Kansas City", an independent city located directly across the river from downtown Kansas City, MO.. The Northland encompasses portions of Clay County and Platte County and includes the suburban areas of Kansas City, Missouri as well as the metro area's northern suburbs such as Riverside, Parkville, Liberty, Excelsior Springs, North Kansas City, Smithville, Kearney, Platte City, and Gladstone.

The Northland is home to the Charles B. Wheeler Airport, Kansas City International Airport, Worlds of Fun, Oceans of Fun, and Zona Rosa, a large-scale mixed use development and regional attraction, as well as most of the metro area's riverboat casinos.

The portion of Kansas City located north of the river has streets numbered up from the line of the Missouri river and St. John Avenue. East of I-435, in the cities of Sugar Creek and Independence, the line continues onto Kentucky Avenue and E. Salisbury Road, respectively. The north-south street names continue into Clay county from Jackson county, but not into Platte county. This is because across the river from Platte county is Kansas City, Kansas. All of the east-west streets in the Northland have the prefix N.E. or N.W. All of the north-south streets have the prefix N.

Downtown is the historic center of the city of Kansas City, Missouri, located entirely within the city of Kansas City, Missouri and containing the original townsite, business districts and residential neighborhoods of the city. Downtown is bounded by the Missouri River on the north, the state line on the west, 31st Street on the south and the Blue River on the east. Downtown includes the central business district and its buildings which form the city's skyline.

Other neighborhoods within Downtown are the River Market and Columbus Park, both located between the downtown loop and the Missouri River. Between the downtown loop and the state line are Westside neighborhood and the West Bottoms, located at the bottom of the bluff adjacent to Kaw Point. East of the loop are the 18th & Vine District, the North Bottoms, East Bottoms, Northeast, and Pendleton Heights. South of the loop is the Crossroads District, Union Hill, Crown Center, Hospital Hill, Longfellow, Wendell Phillips, and Washington Wheatley.

The Kansas City Convention Center, Municipal Auditorium, City Hall, Lyric Theater, Midland Theater, Ilus Davis Park, Barney Allis Plaza, are located within the central business district inside the downtown loop. The Sprint Center and the College Basketball Experience are located within Power & Light District, also within the downtown loop. The Kaufman Center for the Performing Arts is perched upon a high point immediately south of the downtown loop. South of the loop is the Crossroads District, Union Station, Crown Center, the National World War I Museum, Liberty Memorial, Penn Valley Park, Truman Medical Center, Children's Mercy Hospital, and the 18th & Vine District. North of the loop is, City Market within the River Market and Richard L. Berkeley Riverfront Park. West of the loop within the West Bottoms are Kemper Arena, and Hale Arena.

This area is located just south of downtown Kansas City, Missouri, bounded by 31st Street on the north, the state line on the west, 75th Street on the south, and the Blue River on the east. Midtown, is contained entirely within Kansas City, Missouri, and is largely considered to be the core of the metro area as it contains numerous cultural attractions, shopping and entertainment areas, large hospitals, universities, and the metro areas most densely-populated neighborhoods.

Also known as "South Kansas City" this area consists of is the southern half of Kansas City, Missouri as well as the suburbs of Lee's Summit, Grandview, Harrisonville, Belton, Raymore. It is sometimes called "the southland."

The Eastside is an area of the metro that contains the eastern urban side of Kansas City, Missouri as well as the suburbs of Independence, Blue Springs and Raytown. This part of town is best known for the Truman Sports Complex where the Royals and Chiefs play.

Also referred to as "JoCo" this area includes all of Johnson County, Kansas, including the affluent southwestern suburbs of Overland Park, Leawood, Lenexa, Olathe, Shawnee, and De Soto. Interstate 35 runs diagonally through Johnson County from the southwest toward the northeast and downtown Kansas City, Missouri.

Wyandotte or the western side of the metro contains Wyandotte County, Kansas. Wyandotte County, sometimes referred to as just 'Wyandotte', 'WyCo', or 'The Dotte', contains Kansas City, Kansas, Bonner Springs and Edwardsville, and it is governed by a single unified government similar to a consolidated city-county. Often the Wyandotte government is referred to simply as 'The Unified Government'. This area is best known for NASCAR's Kansas Speedway , CommunityAmerica Ballpark, home to the T-Bones and Livestrong Sporting Park home to Sporting Kansas City. Another bend in the Missouri River forms the county line between Wyandotte and Platte counties to the north and northeast.

In all, just over 2 million people live in the metropolitan area as of July 1, 2009. It is difficult to state exactly the size of the population because there are few natural boundaries and suburban expansion (or sprawl) is ongoing.[3]

Some of Kansas City's interstates include:

Areas of the metro

The center of Kansas City is roughly contained inside the downtown loop (shaded in red).

The Kansas City Star is the region's major daily newspaper. The McClatchy Company, the owner of The Star also owns the suburban weeklies Lee's Summit Journal and Olathe Journal.

The Kansas City Kansan serves Wyandotte County having moved from print to an online format in 2009. Additional weekly papers in the metropolitan include the Liberty Tribune, Sun Newspapers of Johnson County and the Northland, The Examiner in Independence and Eastern Jackson County, and The Pitch. Two newspapers serve the area's faith communities: "The Metro Voice Christian Newspaper" and the "Jewish Chronicle". "Dos Mundos" is the area's primary newspaper that serves the Spanish speaking community with articles printed in Spanish and English. A monthly newspaper, The Monitor, covers politics and policy-related news from a Center-right perspective.

According to Arbitron, about 1.5 million people over the age of 12 are part of the Kansas City DMA, making it the 30th largest market for radio and 31st for television Nielsen ratings.

Over 30 FM and 20 am stations broadcast in the Kansas City area, with stations from Topeka, St. Joseph, and Carrollton also reaching into the metropolitan. The highest-rated radio stations according to Arbitron:

Hispanics account for five percent of the market and are served by three AM radio stations (KCZZ, KDTD, and KKHK) and a Univision affiliate, KUKC-LP.

The Kansas City Metropolitan Area's largest private employer is Sprint Nextel Corporation. The international telecommunications company maintains its world headquarters at its 200-acre (0.81 km2) campus facility in south Overland Park. During 2005, the company employed nearly 18,500 people in the five-county metropolitan area, with wages of more than $1.16 billion generating $58 million in local and state income taxes. Sprint spent more than $21 million on property taxes and $1.74 billion for goods and services from area businesses. Sprint's headquarters was temporarily moved to Reston Virginia in 2003 after it merged with Nextel. Since then, the world headquarters has been reconsolidated in Overland Park.[11]

The following companies and organizations (excluding educational institutions) are among the larger one's headquartered in the metro area (noting cities of headquarters office if not Kansas City, MO):

The Kansas City Federal Reserve Bank is one of the U.S.'s twelve such banks.