The Santa Fe Trail was a 19th-century transportation route through central North America that connected Missouri with Santa Fe, New Mexico. Pioneered in 1822 by William Becknell, it served as a vital commercial and military highway until the introduction of the railroad to Santa Fe in 1880. At first an international trade route between the United States and Mexico, it was the 1846 U.S. invasion route of New Mexico during the Mexican–American War.[1]

The route crossed Comancheria, the territory of the Comanches, who demanded compensation for granting rights-of-way. Americans routinely traded with the Comanche along the trail, sometimes finding the trade in Comancheria more profitable than that of Santa Fe.[2]

After the U.S. acquisition of the Southwest, the trail helped open the region to U.S. economic development and settlement, playing a vital role in the expansion of the U.S. into the lands it had acquired. The road route is commemorated today by the National Park Service as the Santa Fe National Historic Trail. A highway route that roughly follows the trail's path through the entire length of Kansas, the southeast corner of Colorado and northern New Mexico has been designated as the Santa Fe Trail National Scenic Byway. 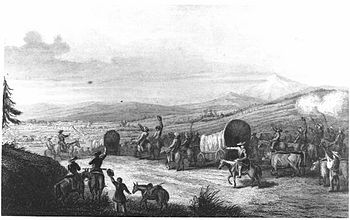 "Arrival of the caravan at Santa Fe," lithograph published c. 1844

The Trail was born in the salad days of the river steamboat freight and passenger service providers, and almost died in the days when the "Iron Horse" Railroads took over much of its economic burden, arguably, only to be reborn as auto roads which eventually took back much of the carrying trade from the railways. None of the 1820s industries could have been as successful without the economic impact of the Emigrant Trails.

The wagon trains that followed various emigrant trails to points west as people responded to opportunity to hold free land, and the political philosophy of Manifest Destiny dominated national political discussions. Connecting the riverboat port cities and their wagon train outfitters to the destinations, the Trail was a fundamentally important trade route, carrying manufactured products from the central plains of United States (Most regularly, present day the Kansas City area, but wagon trails also connected farther north to the trail head towns St. Joseph and Independence, Missouri, which would link to the developing railroads, to points east) to the northeastern ranching and farming country of Mexico, and after the Mexican-American war in 1845 the American Southwest. In the 1820s–30s it was also sporadically important in the reverse trade, carrying foods and supplies to the fur trappers and mountain men opening the remote Northwest, esp. in the Interior Northwest: Idaho, Wyoming, Colorado, and Montana — connecting via mule trail (trapper's trails) to points north to supply the lucrative overland fur trade.

This limited trade traffic transited the site that would become Fort Bent in Colorado (directly on the Santa Fe Trail) and the short-lived trading fort (Name, owner, management, dates all uncertain) that sat astride the Trapper's Trail and Oregon Trail junction point. This post was only eight miles east of the site of Fort John (now Ft. Laramie) (ca. 1833) on what became the Oregon Trail (1832–34).[3] The lost fort was on the same site where Fort Bernard was later founded (1866) in the eastern Oregon Country (Wyoming). That Fort Bernard ran cargo mule trains to the Santa Fe is historically certain. The earlier Fort and its traders are less so, and that gives weight that they might have been independents, and not employees of the large fur companies. Regardless of the lack of explicit documents, it is known the light trading with Mexico used the trail and Trapper's Trail.

Mother of the railroad

Connections along the Santa Fe Railroad — Map shows the principal regular stops on the AT&SF mainline, including such famous cattle drive destinations as Dodge City. It is no accident most of those Kansas, Colorado, and New Mexican towns were also first serviced by the Santa Fe Trail.

In 1863 with all the political dickering over railroad legislation, entrepreneurs opened their pockets and set their sights on the American Southwest leading to the gradual construction east-to west of the Atchison, Topeka and Santa Fe Railway; the name eponymously reflecting the intentions of the founders, the expected eastern terminus to be in Atchison, Kansas, a town founded upon the carrying trade and its support industries, freight companies and their providers.

Inside Kansas, the AT&SF railway's roadbed, by and large, more or less copied and paralleled the Santa Fe Trail route after reaching Topeka as it extended trackage west in the period of 1868–1874. When a railroad bridge was built across the Missouri connecting the eastern markets to the Dodge City cattle trail and Colorado Coal mines, the railroad spurred the growth of Kansas City where the railroad came to cross the Missouri River. Kansas City was on the opposite shore from Saint Joseph, Missouri, one of several historically recognized trail head towns feeding settlers into the Trail and the American West. Building the railway so that it extended westwards to destinations in and beyond the New Mexico border were much delayed as the sparsely settled territory about the mainline, kept the fledgling railroad gasping for operating cash flow. In a move to boot strap their own base market, the railway began offering packaged "Shopping Excursion deals" to potential buyers desiring to look over a real estate parcel and involving discounting such trips to visit its land offices and giving back the ticket price as part of the purchase price if a sale was concluded.

The railroad was cleverly selling the land grant off it had received from congress, which caused the strip along the rail and Trail to bloom with new towns and business — which created railway traffic and revenues in a reinforcing synergy of capitalism. Its economic base established, the railway gradually extended west gradually adding new connections through rougher west country serviced by the western Trail. With the rails overtaking the Trail, the traffic and freight and other traffic diminished little by little until most all the trail's traffic was local trade. In a sense, after World War I the trail was reborn, by the 1920s it was gradually becoming paved over automobile roads. 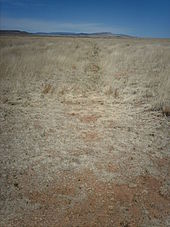 The eastern end of the trail was in the central Missouri town of Franklin on the north bank of the Missouri River. The route across Missouri first used by Becknell followed portions of the existing Osage Trace and the Medicine Trails. West of Franklin, the trail crossed the Missouri near Arrow Rock, after which it followed roughly the route of present-day U.S. Route 24. It passed north of Marshall, through Lexington to Fort Osage, then to Independence. Independence was also one of the historic "jumping off points" for the Oregon and California Trails.

West of Independence, in the State of Missouri, it roughly followed the route of U.S. Route 56 from near the town of Olathe to the western border of Kansas. It enters Colorado, cutting across the southeast corner of the state before entering New Mexico. The section of the trail between Independence and Olathe was also used by immigrants on the California and Oregon Trails, which branched off to the northwest near Gardner, Kansas.

West of Garden City in southwestern Kansas the trail splits into two branches. One of the branches, called the Mountain Route or the Upper Crossing (of the Arkansas River) [6]:93[7]:133 continued to follow the Arkansas upstream in southeastern Colorado to the town of La Junta. At La Junta, the trail continued south into New Mexico to Fort Union at Watrous. 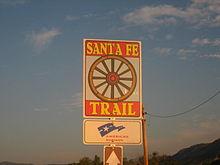 The other main branch, called the Cimarron Cutoff or Cimarron Crossing or Middle Crossing[6]:93[7]:133[8]:144 cut southwest across the Cimarron Desert (also known as the Waterscrape or La Jornada[8]:148) to the valley of the Cimarron River near the town of Ulysses and Elkhart then continued toward Boise City, Oklahoma, to Clayton, New Mexico, joining up with northern branch at Fort Union. This route was generally very hazardous because it had very little water. In fact, the Cimarron River was one of the only sources of water along this branch of the trail.

From Watrous, the reunited branches continued southward to Santa Fe.

Part of this route has been designated a National Scenic Byway. 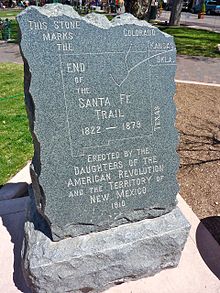 End of the Santa Fe Trail marker on the Plaza in Santa Fe, NM.

Travelers faced many hardships along the Santa Fe Trail. The trail was a challenging 900 miles (1,400 km) of arid plains, desert and mountains. On this trail unlike the Oregon trail, there was a serious danger of Native American attacks, for neither the Comanches or the Apaches of southern high plains tolerated trespassers. In 1825, Congress voted federal protection for the Santa Fe Trail, even though much of it lay in the Mexican territory. Lack of food and water also made the trail very risky. Weather conditions, like huge lightning storms, gave the travelers even more difficulty. If a storm blew up, there was often no place to take shelter and the livestock could get spooked. Rattlesnakes often posed a threat as many people died due to snakebite. The caravan size increased later on to prevent Indian raids. The travelers also packed more oxen instead of mules because the Indians did not want to risk raiding the caravans for only some oxen.

The Republic of Texas had claimed Santa Fe as part of the eastern portion of Texas along the Rio Grande when it seceded from Mexico in 1836. In 1841, a small military and trading expedition left from Austin, Texas, with the aim of gaining control over the Santa Fe Trail. Known as the Texas Santa Fe Expedition the force encountered many difficulties and was captured by the Mexican army. In April 1843, the Republic of Texas Snively Expedition came to plunder Mexican merchant caravans on territory claimed by Texas, in retaliation for recent Texian executions and Mexican invasions, but were quickly arrested and disarmed by United States troops escorting caravans,[9] although not before a member of the party performed the unsanctioned murdering of Antonio Jose Chavez in present day Rice County, Kansas, son of a former governor of Nuevo México.[10]

Segments of this trail in Missouri, Kansas, Oklahoma, and New Mexico are listed on the National Register of Historic Places.[11] The longest clearly identifiable section of the trail, Santa Fe Trail Remains, near Dodge City, Kansas, is listed as a National Historic Landmark.[12] Walking on the Santa Fe trail is now discouraged.[citation needed]

Cimarron Route thru Kansas towards Oklahoma