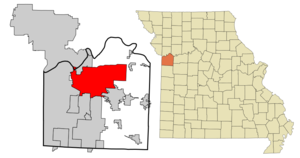 Independence is a city in Jackson County in the of , and the fourth largest city in the state. It is part of the . As of 2007, the city had a total population of 110,704. [ [http://www.census.gov/popest/cities/tables/SUB-EST2007-04-29.xls Missouri by Place and County Subdivision - GCT-T1-R. Population Estimates (geographies ranked by estimate) ] ] Independence is one of two s of Jackson County,GR|6 and is known as the "Queen City of the Trails" [http://www.usacitiesonline.com/mocountyindependence.htm. Retrieved on .] on account of having been the point of departure of the Santa Fe, California and s. The city also played a pivital role in the early history of the , and is home to the denominational headquarters of several Latter Day Saint groups, most notably the , whose Temple is located there.

Independence was originally inhabited by Missouri and Osage Indians, followed by the Spanish and a brief French tenure. It became part of the United States with the of 1803. recorded in their journals that they stopped in 1804 to pick plums, raspberries, and wild apples at a site that would later form part of the city.

In 1831, members of the Latter Day Saint movement began moving to the Jackson County, Missouri area. Shortly thereafter, , their prophet, declared a spot just west of Courthouse Square to be the place for his prophesied temple of the , in expectation of the . Tension grew with local Missourians until finally the Latter-Day Saints were driven from the area. Several branches of this movement would gradually return to the city, with many making their headquarters there. These included the (formerly the Reorganized Church of Jesus Christ of Latter Day Saints), the and the .

Independence saw great prosperity from the late 1830s through the mid-1840s, while the business of outfitting pioneers boomed. Between 1848 and 1868, it was a hub of the to . On , , the granted a to the town and on , , was elected as its first mayor. In the mid-1800s an Act of the defined Independence as the start of the .

Independence saw two important battles during the Civil War: the first on , when Confederate soldiers took control of the town, and the second in October 1864, which also resulted in a Southern victory. The war took its toll on Independence and the town was never able to regain its previous prosperity, although a flurry of building activity took place soon after the war. The rise of nearby Kansas City also contributed to the town's relegation to a place of secondary prominence in Jackson County, though Independence has retained its position as county seat until the present day.

President grew up in Independence, and in 1922 was elected judge of the County Court of Jackson County, Missouri (an administrative, not judicial, post). Although he was defeated for reelection in 1924, he won back the office in 1926 and was reelected in 1930. Truman performed his duties diligently, and won personal acclaim for several popular public works projects, including an extensive series of fine roads for the growing use of automobiles, the building of a new County Court building in Independence, and a series of twelve monuments to pioneer women dedicated across the country in 1928 and 1929. He would later return to the city after two terms as President. His wife, First Lady , was born and raised in Independence, and both are buried there. The Truman home and the are both located in Independence, as is one of Truman's boyhood residences.

Independence continues to be of great importance to the Latter Day Saint movement and is the headquarters of the Community of Christ. This denomination, the second-largest in the Latter Day Saint movement, has built a striking temple in Independence, and also maintains a large auditorium and other buildings nearby. (the "Mormons") operates a sizable visitors' center adjacent to the Community of Christ Temple, which is located directly across the street from the original designated by Joseph Smith in 1830. The Lot itself is occupied by a small white-frame church building that serves as the headquarters and local meeting house for the Church of Christ (Temple Lot).

Prior to Fall 2008, parts of western Independence in the Van Horn feeder pattern resided in the , [ [http://www.accessmylibrary.com/coms2/summary_0286-32978200_ITM Forum explores potential transfer of seven KC schools to Independence district. | Kansas City Star (Kansas City, MO) (September, 2007) ] ] but all of these students are now part of the Independence school district.

"Santa-Cali-Gon Days" is an annual festival held in Independence intermittently since and continuously since , celebrating the city's heritage as the starting point of three major frontier trails: the Santa Fe, California and Oregon. The Santa-Cali-Gon celebration has changed throughout the years: During the 1940's, men grew their beards from one Sant-Cali-Gon to the next in beard growing contests, while the 1950's saw exhibitions of horses and covered wagons, together with numerous other items that might have been purchased in Independence before heading West. In more recent decades the festival, while retaining some of its old customs, has shifted to a carnival atmosphere, with numerous rides, booths and other venues offering a variety of food, beverages, crafts, entertainment (including Country and singers), and similar attractions.

Located in the historic center of town, the Independence town square features numerous family-owned shops surrounding the old main courthouse, which was modeled after 's Independence Hall. This courthouse houses Harry S. Truman's former courtroom, and his home is a short walk away. Both are available for tours. Also located on the square are the remains of the old county jail, now turned into a museum, which housed , among others. A farmers' market is held on the northeast side of the square on Saturdays, mid-May through Mid-September. The Santa-Cali-Con festival is also held on the square and nearby streets. [ [http://www.ci.independence.mo.us/Tourism/default.aspx City of Independence, Missouri ] ]

* [http://www.ci.independence.mo.us/nftm/ National Frontier Trails Museum] : Museum and interpretive center dedicated to the history of the Overland Trails and the settlement of the American West.
*: Official library of the 33rd U.S. President.
* [http://www.hairwork.com/leila/ Leila's Hair Museum] : Museum of Victorian-era art of hair jewelry and wreaths.
* [http://www.hazelle.org/ Puppetry Arts Institute] : Includes puppets from around the world, a puppet resource center and stage.