The Old Spanish Trail is a historical trade route which connected the northern New Mexico settlements near or in Santa Fe, New Mexico with that of Los Angeles, California and southern California. Approximately 1,200 mi (1,900 km) long, it ran through areas of high mountains, arid deserts, and deep canyons. It is considered one of the most arduous of all trade routes ever established in the United States. Explored, in part, by Spanish explorers as early as the late 1500s, the Trail saw extensive use by pack trains from about 1830 until the mid-1850s.

The name of the trail comes from the publication of John C. Frémont’s Report of his 1844 journey for the U.S. Topographical Corps. guided by Kit Carson from California to New Mexico. The name acknowledges the fact that parts of the trail had been known to the Spanish since the sixteenth century.[1][2] Frémont's report named a trail that had already been in use for about 15 years. The trail is significant to New Mexico history, because it established an arduous but usable trade route with California.

The exploration of the West by Jedediah Smith

The trail is combination of known trails that were established by Spanish explorers, trappers and traders with the Ute and other tribes of Indians. The eastern areas of what became called the Old Spanish Trail, including southwest Colorado and southeast Utah, were explored by Juan Maria de Rivera in 1765. Franciscan missionaries Francisco Atanasio Domínguez and Silvestre Vélez de Escalante unsuccessfully attempted the trip to California, which was just being settled, leaving Santa Fe in 1776 and making it all the way into the Great Basin near Utah Lake before returning via the Arizona Strip. Other expeditions under another Franciscan missionary Francisco Garcés, and Captain Juan Bautista de Anza then explored and traded in the southern part of the region, finding shorter and less arduous routes through the mountains and deserts which connected Sonora to New Mexico and California, but did not become part of the Old Spanish Trail, with the exception of some of the paths through the Mojave Desert. The middle part of the trail through Nevada and California was worked out by trappers led by Jedediah Smith in about 1827. [3]

A route linking New Mexico to California, combining information from many explorers, was opened in 1829-30 when Santa Fe merchant Antonio Armijo led a trade party of 60 men and 100 mules to California. Using a short cut discovered by Rafael Rivera the previous year, the Armijo party was able to stitch together a route that connected the routes of the Rivera and Domínguez-Escalante Expeditions and the Jedediah Smith explorations with the approaches to San Gabriel Mission through the Mojave along the Mojave River. After this date, the route began to be used by traders for usually a single annual round trip. [4] Upon the return of Antonio Armijo, the governor of New Mexico immediately announced the success to his superiors in Mexico City. As a reward, the governor officially named Armijo “Commander for the Discovery of the Route to California.”

Word spread about the successful trade expedition and some commerce began between Santa Fe and Los Angeles. This commerce usually consisted of one mule-laden pack train from Santa Fe with 20 to 200 members, with roughly twice as many mules, bringing New Mexico goods hand-woven by Indians, such as serapes and blankets, to California. California had many horses and mules, many growing wild, with no local market, which were readily traded for hand-woven Indian products. Usually two blankets were traded for one horse, more blankets were usually required for a mule. California had almost no wool processing industry and few weavers, so woven products were a welcome commodity. The trading party usually left New Mexico in early November to take advantage of winter rains to cross the deserts on the trail and would arrive in California in early February. The return party would usually leave California for New Mexico in early April to get over the trail before the water holes dried up and the melting snow raised the rivers too high. The return party often consisted of several hundred to a few thousand horses and mules. Low-scale emigration from New Mexico to California used parts of the trail in the late 1830s when the trapping trade began to die. The trail was also used for illicit purposes, namely to raid the California ranchos for horses and for an extensive Indian slave trade. These horse raids were made by Mexicans, ex-trappers and Indian tribes who together stole hundreds to thousands of horses in one raid. Native Americans, usually women and children, were captured and sold to Mexican ranchers, etc., in both California and New Mexico for domestic servants. Mexican traders and Indian raiding parties both participated in this slave trade. The consequences of this human trafficking had a long-standing effect for those who lived along the trail, even after the trail was no longer in use. Intermittent Indian warfare along the trail often resulted from these slave raids by unscrupulous traders and raiding Indians.

John C. Frémont, "The Great Pathfinder," took the route, guided by Kit Carson, in 1844 and named it in his reports written up in about 1848. New Mexico-California trade continued until the mid-1850s, when a shift to the use of freight wagons and the development of wagon trails made the old pack trail route obsolete. By 1846 both New Mexico and California had become U.S. territories as a result of the Mexican-American War of 1846-1848, and after 1848 large numbers of Mormon immigrants were settling in Utah, Nevada and California all along the trail, affecting both trade interests and tolerance for the slavery of American Natives.

Place names used in this article refer to present-day states and communities. Few (if any) settlements existed along the trail before 1850, although many of the geologic features along the Trail retain their Spanish designations.

The route of the Old Spanish Trail in southeastern Utah 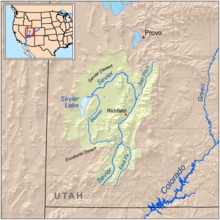 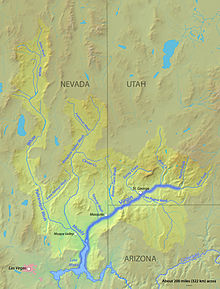 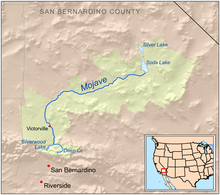 The central route of the Old Spanish Trail, which had to swing north to avoid the impassable Grand and Glen Canyons on the Colorado River, ran northwest from Santa Fe through southwestern Colorado, past the San Juan Mountains, Mancos, and Dove Creek, entering Utah near present day Monticello, Utah. The trail then proceeded north through difficult terrain to Spanish Valley near today's Moab, Utah, where it crossed the difficult and wide Colorado River and then turned northwest to cross the treacherous Green River near present day Green River, Utah. The route then passed through (or around) the San Rafael Swell, the northernmost reach of the Trail. Entering the Great Basin in Utah via Salina Canyon, the trail turned southwest following the Sevier River, Santa Clara River and Virgin River before ascending the Mormon Plateau and hitting the Muddy River in present-day Nevada. From there, it was a 55 miles (89 km) waterless trip crossing southern Nevada to the springs at Las Vegas, Nevada. From Las Vegas, the trail went across the Mojave desert from Mountain, Resting, Salt and Bitter springs (which were sometimes dry), each about a day's travel apart across the Mojave Desert until it reached the only intermittently-dependable Mojave River. The river was followed to a point near Cajon Pass over the San Bernardino Mountains. If parts of the Mojave River were dry, travelers could sometimes find water by digging in the old river bed. Descending Cajon Pass to reach the coastal plains, the trail turned west along the foot of the San Gabriel Mountains to where the Mission San Gabriel Arcángel and El Pueblo de Los Ángeles in California were located. In all, the route involved several dry sections with limited grass and sometimes limited water, crossed two deserts, and was often littered with the bones of horses that had died of thirst.[5] The route could only be used semi-reliably in winter when winter rains or snows deposited water in the desert. In summer, there was often no water and the oppressive heat could kill. A single round trip per year was about all that was feasible. Later parts of the trail were used for winter access to California when other trails were closed by snow. Alternate routes for this journey existed through central Colorado and through the Arizona Strip.

Although few traces of the early traders' trail remain, the Trail is now commemorated in many local street and road names, and numerous historical markers in the states that it crossed. It is listed as the Old Spanish National Historic Trail by the Bureau of Land Management and National Park Service. Portions of US 160 in Colorado and US 191 in Utah are similarly designated.

In 1988, a section of the trail in Arches National Park was placed on the National Register of Historic Places.[7][8]

In 2001, the section of the Trail that runs across Nevada from the Arizona border to California (known as the "Old Spanish Trail-Mormon Road Historic District") was placed on the National Register of Historic Places.[9][10]