Douglas County (county code DG) is a county located in northeast Kansas, in the Central United States. As of the 2010 census, the county population was 110,826.[1] Its county seat and most populous city is Lawrence,[2] and the entire county is included in the Lawrence, Kansas, Metropolitan Statistical Area.

Douglas County was opened for settlement on May 15, 1854, and was named for Stephen A. Douglas, a senator from Illinois. The county was practically at the center of the Bleeding Kansas years as leaders in Lecompton, the territorial capital, wanted Kansas to be a slave state and leaders in Lawrence wanted Kansas to be a free state. Because of this, multiple events took place, including the drafting of the Lecompton Constitution admitting Kansas as a slave state, the sacking of Lawrence, and the Battle of Black Jack.[citation needed]

Douglas County is divided into nine townships. The city of Lawrence is considered governmentally independent and is excluded from the census figures for the townships. In the following table, the population center is the largest city (or cities) of significant size included in that township's population total.

Map of Douglas County, 1889. From History of Kansas. 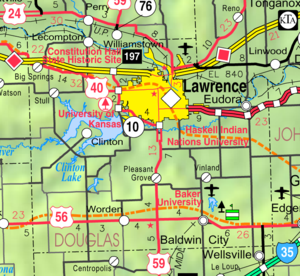 The county originally had only four townships. Lecompton comprised the area of Lecompton, Kanwaka, and Clinton townships; Washington took the place of Marion and Willow Springs townships; Wakarusa comprised both Wakarusa and Eudora townships; and Calhoun was the original name of Palmyra township. Grant township was annexed from Jefferson County in 1874.

Clinton Lake, completed in 1980, offers boating, fishing and other water sports and various parks surrounding the lake provides camping and trails for mountain biking, hiking and horseback riding. The Wakarusa Music and Camping Festival was held there every June from 2004 to 2008.[citation needed]

Other events in the county include the Maple Leaf Festival in Baldwin City every third full weekend in October. Lecompton's Territorial Days take place every year in June and Lawrence has many parades throughout the year including Christmas and St. Patrick's Day.[citation needed] 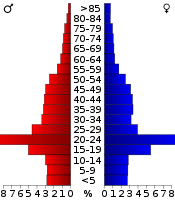 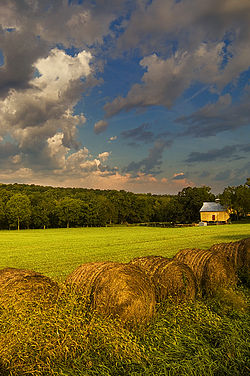