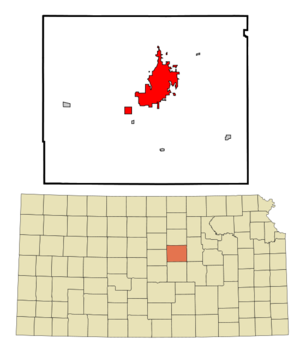 Salina is the principal city of the Salina Micropolitan Statistical Area, which includes all of Saline and Ottawa counties.

In 1860 Salina, the westernmost post on the , began to establish itself as a for prospectors traveling to , as well as a between local native tribes, and . After the Civil War, Phillips, then a , used his influence to extend the to Salina in 1867. Starting in 1872, Salina began transporting meat shipped in s down the rails. During the 1870s, became the dominant crop in Salina and a steam-powered was built. At the same time Dr. , of Salina, introduced to Kansas farmers.

During , , located southwest of Salina, was one of several notable training bases. The of the 1950s of Salina was related largely to the re-opening of the base, later renamed Schilling Air Force Base, subsequently closed in 1965 by the Department of Defense. As Schilling AFB, it was home to the 's 40th and 310th Bomb Wings of the 802nd Air Division between 1952 and 1960, flying s and s; to the 310th Strategic Aerospace Wing between 1960 and 1962; and between 1962 and 1965, to the 22nd Strategic Aerospace Division, controlling the 310th SAW and the Atlas s of the 550th Strategic Missile Squadron.

On , the city was home to the "" when took off from the Salina Airport in the , to attempt the first solo, non-stop, non-refueled aerial circumnavigation of the globe by airplane. Fossett completed the record-breaking flight on when he landed back in Salina after 67 hours, 1 minute and 10 seconds, at an average speed of convert|342.2|mi/h|km/h|abbr=on. Support for the venture was provided by the Kansas State Aviation Research (KStAR) Lab.

Salina is the closest city to the geographic and geodetic centers of the United States with a population of over 50,000. Salina stands at an elevation of convert|1281|ft|m.

The area receives about 32 inches of precipitation during an average year with the largest share being received in May and June—with a combined 18 days of measurable precipitation. During a typical year the total amount of precipitation may be anywhere from 24 to convert|44|in|mm. There are on average 77 days of measurable precipitation per year. Winter snowfall averages almost 19 inches, but the median is less than convert|10|in|mm. Measurable snowfall occurs an average of 9 days per year with at least an inch of snow being received on seven of those days. Snow depth of at least an inch occurs an average of 27 days per year.

On September 25, 1973 a tornado measuring F3 passed through the southeast part of town injuring 6 people, destroying 2 houses and the Sundowner East trailer park.

On June 11, 2008 another EF3 tornado passed on the south side of the town severely damaging several buildings including a nursing home.

Salina is predominantly White and Christian, with over 80% of the population being White (non-Hispanic) and having approximately 65 churches.

is the predominant industry in Salina, and its are visible from miles away.This agrarian emphasis is even reflected in a local Catholic Church, Sacred Heart Cathedral, which is built in white cylindrical shapes intriguingly like grain silos. However, Salina has several other important employers. The city also has a strong base. , a brand, is Salina's largest single employer with over 2000 workers employed. Tony's makes consumer retail frozen s as well as food intended for and other institutions. Additionally, over 500 are employed in factories for Philips Lighting, Exide Battery, (farm equipment), (commercial bus manufacturer) and Hawker Beechcraft Corperation (formerly Raytheon Aircraft).

, a branch of (main campus in Manhattan, ) offers undergraduate degrees in both technology and aviation related fields. (Kansas State University - Salina was previously known as Kansas Technical Institute) K-State Salina is based at Salina Municipal Airport (KSLN). Salina is also home of , a private liberal arts college that affiliates itself with the , and Brown Mackie College. Enrollment in Salina at each of these institutions is around 800.

{ [http://www.wilsonco.com/projects/images/lakewood_new_fac_1.jpg}] Salina has five high schools - three public and two private: , , (located outside of the town of Gypsum, not in it.) are public and the two private schools are Sacred Heart Catholic High School and . Salina also has two middle schools Lakewood Middle School and South Middle School. Total enrollment of the public school system is about 11,000.

Salina is served by one commercial airline at , but most airtravel is done at larger airports in and .

*The 1980 teen comedy film "" was filmed entirely in Salina, mostly on the campus of , [ [http://www.imdb.com/title/tt0081695/locations Internet Movie Database] ]
* Scenes of the 1955 movie "Picnic", starring and , were filmed in Salina.
* Millie Dillmount, the main character in the play "Thoroughly Modern Millie", is from Salina. She leaves home for , determined never to return.
* In 's 1958 film "Vertigo", the character of Judy Barton, played by , comes from Salina.
* Bluegrass band have a song titled "Salina."
* In 's song, "Wichita Skyline" (from the 1996 album ""), she sings "As far as Salina I can get that good station from LaRue / I'm searching the dial while I'm scanning the sky for a patch of blue / And I watch the black clouds roll in, chasing me back again / Back to the flat fine line, the Wichita skyline." (LaRue is in Texas.)
* The song, "Townes' Blues" (from the 1992 album ""), describes a trip from to through Salina, though Canadian lead singer uses a pronunciation familiar for rather than that used in Kansas.
* Gene Mauch, major league baseball player and manager (Phillies and Montreal) was born and raised in Salina.
* Salina, KS was destroyed by the Russian villain in Ted Bell's 2008 novel TSAR. [ [http://www.rushlimbaugh.com/home/daily/site_052708/content/01125107.guest.html] ]