Doniphan County (county code DP) is a county located in Northeast Kansas, in the Central United States. As of the 2010 census, the county population was 7,945.[1] Its county seat is Troy[2] and its most populous city is Wathena. The county along with Buchanan, Andrew, and DeKalb counties in Missouri is included in the St. Joseph Metropolitan Statistical Area.

Doniphan County was established August 25, 1855, and organized on September 18, 1855. It is named for the U.S. cavalry commander Colonel Alexander W. Doniphan (1808–1887) of Liberty, Missouri, who played an important part in the Mexican-American War. He was a zealous partisan in the failed effort made to extend slavery into Kansas.[citation needed]

Doniphan County is served by a Board of County Commissioners composed of one elected official from each of three districts. The commissioners serve four-year terms with the 2nd and 3rd district elections following two years after the 1st district election. The board is responsible for setting the county's policies, procedures, and budgets as well as overseeing functions of their respective road and bridge shops. In addition, the board acts as the Board of County Canvassers and canvasses votes cast at each election. The county has adopted comprehensive county planning and zoning codes. The cities are governed by mayors and city councils. Government services are paid for through a sales tax, property tax, and an ad valorem tax mill levy.[citation needed]

Although the Kansas Constitution was amended in 1986 to allow the sale of alcoholic liquor by the individual drink with the approval of voters, Doniphan County has remained a prohibition, or "dry", county.[3]

The Missouri River defines the border in the north and east. Eight barge lines travel the river, and a Port Authority is located across the river in Saint Joseph, Missouri. The river provides much of the water for the eastern part of the county. Interior cities, such as Troy and Highland, receive their water from underground wells. The Wolf River flows through western portions of the county and north into the Missouri River. 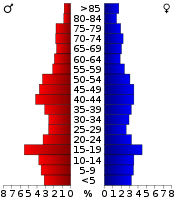 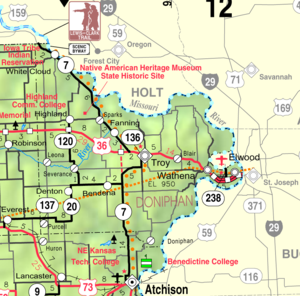 Doniphan County is divided into nine mostly rural townships. The three townships with the greatest population lie along U.S. Highway 36. None of the cities within the county are considered governmentally independent, and all figures for the township include those of the cities. In the following table, the population center is the largest city (or cities) included in that township's population total, if it is of a significant size.

Highland Community College
This was the first college established in the state when the Highland University charter was granted by the Territorial Legislature in 1858. Over time the college lost its affiliation with the Presbyterian Church and changed its name several times before becoming a regional rural community college. (Web site)

Native American Heritage Museum, 2 miles east of Highland
Originally a Presbyterian Mission built in 1845 to educate Iowa and Missouri Sac and Fox children, the museum was rehabilitated to showcase the arts and history of the emigrant tribes in northeastern Kansas. (Web site)
Nelson Rodgers House, in Troy
Built in 1856, this 1 1⁄2-story center-gable house constructed of hand-hewn timbers is the first and oldest remaining house in Troy.
Four-state Lookout, in White Cloud
This viewing platform provides a panoramic view of the Missouri River valley, including Kansas, Missouri, Nebraska, and (possibly) Iowa.
Townsite of Old Doniphan
On July 4, 1804 the Lewis and Clark Expedition camped near an uninhabited Kanza Indian village on Independence Creek. The former town of Doniphan was established in the vicinity of the campsite.