Dry county
This article is about counties in the U.S. that prohibit alcoholic beverage sales. For the Bon Jovi song, see Dry County (song). For the song by The B-52's, see Cosmic Thing. 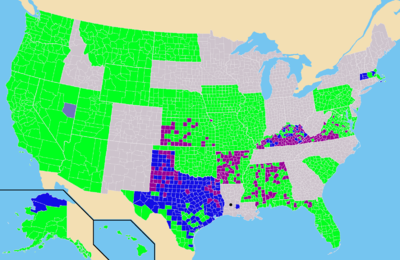 A dry county is a county in the United States whose government forbids the sale of alcoholic beverages. Some prohibit off-premises sale, some prohibit on-premises sale, and some prohibit both. Hundreds of dry counties exist across the United States, almost all of them in the South. A number of smaller jurisdictions also exist, such as cities, towns and townships, which prohibit the sale of alcoholic beverages. These are known as dry towns, dry cities or dry townships.

Although the 21st Amendment repealed the prohibition of alcohol on the federal level, that Amendment also specifically prohibits the selling or production of alcohol in violation of state laws. Some states after the repeal passed local option laws granting counties and municipalities, either by popular vote or ordinance, the ability to decide for themselves whether to allow alcohol.

Many dry communities do not prohibit the mere consumption of alcohol, which could potentially cause a loss of profits and taxes from the sale of alcohol to their residents in "wet" (non-prohibition) areas. The rationale for maintaining prohibition on the local level often is religious in nature, as many Protestant Christian denominations discourage the consumption of alcohol by their followers (see Christianity and alcohol, sumptuary law, and Baptists and Bootleggers). While state law does not allow for dry counties, similar laws designed to restrict the sale and consumption of alcohol also are common in the mostly LDS (Mormon) state of Utah. Utah state law prohibits local jurisdictions from exercising control over liquor laws. An additional, more pragmatic intent of these laws often is to reduce alcohol consumption in that particular county (and the potential health, safety, and public order issues that can accompany it) by limiting the ease of acquiring it.

It once had been considered that, since the 21st Amendment repealed national prohibition, alcohol prohibition became a state police-power issue rather than a federal commerce-power one. States (and other sovereign territories) were assumed to have the power to regulate commerce with respect to alcohol traveling to, from, or through their jurisdictions. However, while the 21st Amendment does give states the power to ban alcohol, that power is not absolute.

In particular, one state's ban on alcohol may not impede interstate commerce between states that permit it. The Supreme Court of the United States held in Granholm v. Heald 544 U.S. 460 (2005) that states do not have the power to regulate interstate shipments of alcoholic beverages. Therefore, it may be likely that city, county, or state legislation banning possession of alcoholic beverages by passengers of vehicles operating in interstate commerce (such as trains and interstate bus lines) would be unconstitutional, were passengers on such vehicles simply passing through the area.

For example, the Navajo Nation has long forbidden alcohol. Even prior to Amtrak, when Santa Fe Railway's Super Chief passed through, the bar closed for the duration of the transit, but the alcohol stayed on board.

A 2004 survey by the National Alcoholic Beverage Control Association found that over 500 municipalities in the United States are dry, including 83 in Alaska. Almost one half of Mississippi's counties are dry. Its alcohol laws are similarly complex. In Florida, four of the 67 counties are dry,[1] all of which are located in the northern part of the state, an area that has cultural ties to the Deep South; the number had been five until 16 August 2011 when Suwannee County voted by a margin of 7489 for becoming wet to 3612 for remaining dry and 7576 for sales by the package and drink to 2079 for sales by the package only.[2]

Research has found that dry counties have higher proportions of alcohol-related traffic crashes than do wet counties. A study in Kentucky suggested that residents of dry counties have to drive farther from their homes to consume alcohol, thus increasing impaired driving exposure.[3] A study of Arkansas noted that wet and dry counties are often adjacent and that alcohol beverage sales outlets are often located immediately across county or even on state lines.[4] Other researchers have pointed to the same phenomenon. Winn and Giacopassi observed that residents of wet counties most likely have "shorter distances [to travel] between home and drinking establishments."[5] From their study, Schulte and colleagues concluded that in dry counties "individuals are driving farther under the influence of alcohol, thus increasing their exposure to crashes."[6]