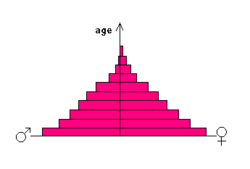 This distribution is named for the frequently pyramidal shape of its graph.

A population pyramid, also called an age structure diagram, is a graphical illustration that shows the distribution of various age groups in a population (typically that of a country or region of the world), which forms the shape of a pyramid when the population is growing. It is also used in Ecology to determine the overall age distribution of a population; an indication of the reproductive capabilities and likelihood of the continuation of a species.

It typically consists of two back-to-back bar graphs, with the population plotted on the X-axis and age on the Y-axis, one showing the number of males and one showing females in a particular population in five-year age groups (also called cohorts). Males are conventionally shown on the left and females on the right, and they may be measured by raw number or as a percentage of the total population.

Population pyramids are often viewed as the most effective way to graphically depict the age and sex distribution of a population, partly because of the very clear image these pyramids present.[1]

A great deal of information about the population broken down by age and sex can be read from a population pyramid, and this can shed light on the extent of development and other aspects of the population. A population pyramid also tells how many people of each age range live in the area. There tends to be more females than males in the older age groups, due to females' longer life expectancy.

Population pyramids for 4 stages of the demographic transition model

While all countries' population pyramids differ, four general types have been identified by the fertility and mortality rates of a country.

Stable pyramid - A population pyramid showing an unchanging pattern of fertility and mortality.

Stationary pyramid - A population pyramid typical of countries with low fertility and low mortality, very similar to a constrictive pyramid.

Expansive pyramid - A population pyramid showing a broad base, indicating a high proportion of children, a rapid rate of population growth, and a low proportion of older people. This wide base indicates a large number of children. A steady upwards narrowing shows that more people die at each higher age band. This type of pyramid indicates a population in which there is a high birth rate, a high death rate and a short life expectancy. This is the typical pattern for less economically developed countries, due to little access to and incentive to use birth control, negative environmental factors (for example, lack of clean water) and poor access to health care.

Constrictive pyramid - A population pyramid showing lower numbers or percentages of younger people. The country will have a greying population which means that people are generally older, as the country has long life expectancy, a low death rate, but also a low birth rate. This pyramid has been occurring more frequently, especially when immigrants are factored out, and is often a typical pattern for a very developed country, a high over-all education and easy access and incentive to use birth control, good health care and few or no negative environmental factors.

Median age by country. A youth bulge is evident for Africa, and to a lesser extent for South and Southeast Asia and Central America. 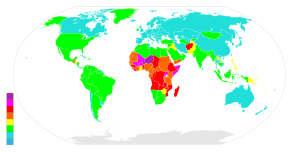 The expansive case was described as youth bulge by Gary Fuller (1995). Gunnar Heinsohn (2003) argues that an excess in especially young adult male population predictably leads to social unrest, war and terrorism, as the "third and fourth sons" that find no prestigious positions in their existing societies rationalize their impetus to compete by religion or political ideology.

Heinsohn claims that most historical periods of social unrest lacking external triggers (such as rapid climatic changes or other catastrophic changes of the environment) and most genocides can be readily explained as a result of a built-up youth bulge, including European colonialism, 20th-century fascism, rise of Communism during the Cold War, and ongoing conflicts such as that in Darfur and terrorism.[citation needed] Historical economic recessions, such as the Great Depression of the 1930s, are also claimed to be explained in part due to a large youth population who cannot find jobs.

One problem with this line of reasoning is that under conditions prevailing before the introduction of modern medicine, death rates were much higher than they are now, and almost all societies had youth bulges even when their population growth rate was negligible. However, they certainly did not experience such youth bulge as prevails today in some parts of the world or as prevailed in twentieth century Germany or in Africa and the Middle East nowadays.[original research?]

It is not just that most periods of unrest occurred in societies with youth bulges, but that some of the pre-modern periods of any sort existed in societies with such bulges as well. Nevertheless, since the improvement of medicine and its introduction, the element of youth bulge has become far more salient than before. Therefore, perhaps it cannot explain massacres throughout human history, but it can serve as rather plausible theory to explain the terror, social unrest, and uprisings in today's society.[3]

Another problem is that it ignores the social consequences of poverty, corruption and mass unemployment among young males in developing countries, where most of the world's current population growth is occurring. The "youth bulge" is not an accurate predictor of social unrest, war and terrorism, because they are the product of far more complicated and interrelated set of factors, of which demographics only plays a part. Yet, even when there are other factors and circumstance to enable mass unrest, a youth bulge is likely to be one of them.[3]

Youth bulge theory represents one of the most recently developed theories of war and social unrest,[3] and has become highly influential on U.S. foreign policy as two major U.S. proponents of the theory, political scientists Jack Goldstone and Gary Fuller,[4][5] have acted as consultants to the U.S. government.[citation needed]

The Middle East and North Africa

The Middle East and North Africa are currently experiencing a prominent youth bulge. Structural changes in service provision, especially health care, beginning in the 1960s created the conditions for a population explosion, which has resulted in a population consisting primarily of younger people. It is estimated that around 65% of the regional population is under the age of 30.[6]

The Middle East has invested more in education, including religious education, than most other regions such that education is available to most young people.[7] However, that education has not led to higher levels of employment, and youth unemployment is currently at 25%, the highest of any single region.[8] Of this 25%, over half are first time entrants into the job market.[9]

A poor neighbourhood in Cairo. 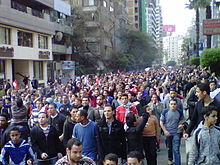 According to the Peterson Institute for International Economics and other proponets of demographic structural approach (cliodynamics), the basic problem Egypt has is unemployment driven by a demographic youth bulge: with the number of new people entering the job force at about 4% a year, unemployment in Egypt is almost 10 times as high for college graduates as it is for people who have gone through elementary school, particularly educated urban youth, who are precisely those people that were seen out in the streets during 2011 Egyptian revolution.[15] [16]

This is in stark contrast to others like Kuwait and Saudi Arabia, who are actively trying to engage and utilize their youth bulge, or Algeria and Morocco, which have tried to mitigate the worst effects of a disenfanchised and disillusioned youth.

Population pyramids can be used to find the number of economic dependents being supported in a particular population. Economic dependents are defined as those under 15 (children who are in full time education and therefore unable to work) and those over 65 (those who have the option of being retired). In some less developed countries children start work well before the age of 15, and in some developed countries it is common to not start work until 30 (like in the North European countries), and people may work beyond the age of 65, or retire early. Therefore, the definition provides an approximation. In many countries, the government plans the economy in such a way that the working population can support these dependents. This number can be further used to calculate the dependency ratio in that population.

Population pyramids can be used to observe the natural increase, birth, and death rate.