Year 1969 (MCMLXIX) was a common year starting on Wednesday (link will display the full calendar) of the Gregorian calendar. The year is associated with the first manned landing on the Moon (Apollo 11). 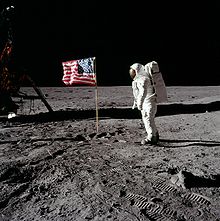 Buzz Aldrin on the Moon during Apollo 11