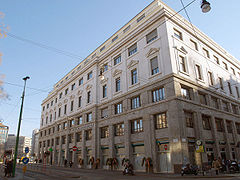 Banca Nazionale dell'Agricoltura building, inside of which the terrorist bombing in Piazza Fontana was carried out on December 12, 1969. (Picture taken on December 12, 2007).

The Piazza Fontana Bombing (Italian: Strage di Piazza Fontana) was a terrorist attack that occurred on December 12, 1969 at 16:37, when a bomb exploded at the headquarters of Banca Nazionale dell'Agricoltura (National Agrarian Bank) in Piazza Fontana (some 200 metres from Duomo) in Milan, Italy, killing 17 people and wounding 88. The same afternoon, three more bombs were detonated in Rome and Milan, and another was found undetonated.

Plaque in memory of the anarchist Giuseppe Pinelli.

The Piazza Fontana bombing was initially attributed to anarchists. After over 80 arrests were made, suspect Giuseppe Pinelli (born in 1928), an anarchist railway worker, died after falling from the fourth floor window of the police station where he was being held.[1] Serious discrepancies existed in the police account, which initially maintained that Pinelli had committed suicide by leaping from the window during a routine interrogation session. Murder charges against Luigi Calabresi (1937-72), one of the officers on duty at the time, and other police officials were dropped by the prosecutor (giudice istruttore) for lack of evidence, who decided that Pinelli's fall had been caused by loss of consciousness ("malore").
In 1972 Calabresi was murdered by left-wing militants in revenge, after which Adriano Sofri and Giorgio Pietrostefani, former leaders of the far-left Lotta Continua were sentenced for organizing, and members Ovidio Bompressi and Leonardo Marino were sentenced for carrying out Calabresi's assassination. 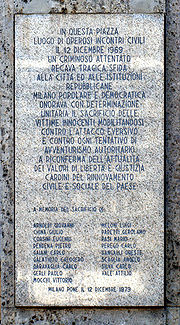 Anarchist Pietro Valpreda was also arrested after a taxi driver identified him as the suspicious-looking client he had taken to the bank that day. After his alibi was judged insufficient, he was held for three years in preventive detention before being sentenced for the crime. Sixteen years later on appeal he was eventually exonerated after several miscarried trials.

Far-right Neo-fascist organization Ordine Nuovo, founded by Pino Rauti, was then suspected. On March 3, 1972, Franco Freda, Giovanni Ventura and Rauti were arrested and charged with planning the terrorist attacks of April 25, 1969 at the Trade Fair and Railway Station in Milan, and the August 8 and August 9, 1969 bombings of several trains, followed by the Piazza Fontana bombing, but were acquitted and no-one was ever successfully prosecuted.[2]

Several elements brought the investigators to the theory that members of extreme right-wing groups were responsible for the bombings:

In 1974 the trial was moved from Milan to Catanzaro. On October 4, 1978 the police discovered that Freda had disappeared from his Catanzaro apartment. On February 23, 1979 he was pronounced guilty for the Piazza Fontana bombing and the court sentenced him to life imprisonment. On August 23, 1979 Freda was captured in Costa Rica and extradited to Italy, after which several trials followed, and he was sentenced to 15 years of jail for "subversive association" on March 20, 1981, then acquitted on August 1, 1985 for lack of evidence.

In 1989, Stefano Delle Chiaie was arrested in Caracas, Venezuela and extradited to Italy to stand trial for his role in the bombing, but was acquitted by the Assise Court in Catanzaro in 1989, along with fellow suspect Massimiliano Fachini.

On June 20, 2001 Italian Ordine Nuovo members Carlo Maria Maggi (a physician), Delfo Zorzi and Giancarlo Rognoni were all convicted, but their convictions were overturned in March 2004. Carlo Di Giglio received immunity from prosecution in exchange for his information.

On May 3, 2005 the last trial ended with no one found guilty of the bombing.

The Red Brigades conducted an inquiry of its own on the events.[3]. The results of this (and other) inquiries were found in a Red Brigades hideout in Robbiano di Mediglia (Italy) after a firefight with the Italian police (Carabinieri) on October 15, 1974, and remained however secret until 2000, when the "Commissione Stragi" of the Italian Parliament, investigating terrorism during the presidency of Giovanni Pellegrino uncovered it.[4] The Red Brigades concluded that Pinelli had committed suicide because he had been somehow involved in handling the explosive material which was then used for the bombing.

Political theories of responsibility for the bombing

A 2000 parliamentary report published by the center-left Olive Tree coalition claimed that "U.S. intelligence agents were informed in advance about several right-wing terrorist bombings, including the December 1969 Piazza Fontana bombing in Milan and the Piazza della Loggia bombing in Brescia five years later, but did nothing to alert the Italian authorities or to prevent the attacks from taking place." It also alleged that Pino Rauti (current leader of the MSI Fiamma-Tricolore party), a journalist and founder of the far-right Ordine Nuovo (New Order) subversive organization, received regular funding from a press officer at the U.S. embassy in Rome. "So even before the 'stabilising' plans that Atlantic circles had prepared for Italy became operational through the bombings, one of the leading members of the subversive right was literally in the pay of the American embassy in Rome", the report says.[5]

Christian Democrat co-founder of Gladio (NATO's stay-behind anti-Communist organization in Italy) Paolo Emilio Taviani told investigators that the SID military intelligence service was about to send a senior officer from Rome to Milan to prevent the bombing, but finally decided to send a different officer from Padua in order to put the blame on left-wing anarchists. Taviani also alleged in an August 2000 interview to Il Secolo XIX newspaper: "It seems to me certain, however, that agents of the CIA were among those who supplied the materials and who muddied the waters of the investigation."[6]