October 15 is the 288th day of the year (289th in leap years) in the Gregorian calendar. There are 77 days remaining until the end of the year. 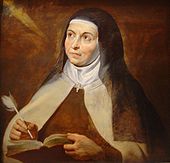 Saint Teresa of Ávila, Carmelite and Doctor of Church.