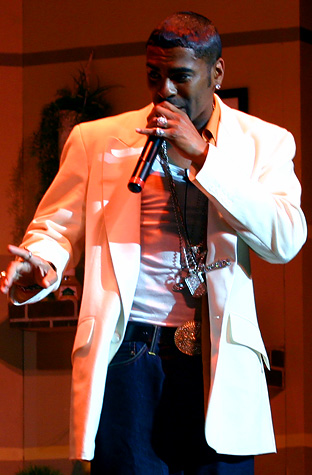 Elgin Baylor Lumpkin (born October 15, 1975) [ [http://www.mtv.com/music/artist/ginuwine/artist.jhtml#bio Ginuwine at mtv.com] . Accessed May 25, 2008.] [ [http://www.vh1.com/artists/az/ginuwine/bio.jhtml Ginuwine at vh1.com] . Accessed May 25, 2008.] , better known by his Ginuwine, is an American R&B and an occasional actor. Signed to since the mid-1990s, Ginuwine has released a number of multi-platinum and platinum-selling albums and singles, becoming one of R&B's top artists during the '90s heyday of hip-hop soul.

Ginuwine was born on October 15, 1975 in , . He is named after legend . In 1989, he graduated from Forestville High School in and later graduated from Prince Georges Community College in with a degree. Soon afterwards broke into the music industry, becoming a part of member 's collective in the early 1990s.

Ginuwine can be spotted in one of Jodeci's videos. There, he met rapper and producer Timothy "Timbaland" Mosley, who became his main collaborators through the 1990s. Ginuwine's first single, 1996's "Pony" from "", showcased his smooth vocals and Timbaland's innovative production style, and the two became a hit-making duo. The song "Pony" was used in a "karaoke" scene from the box office smash "" in 2007 and again used in the video game in 2008. Ginuwine and covered 's "When Doves Cry" single from the movie soundtrack to Purple Rain". Ginuwine's version was released but Aaliyah's version was not.

After his second album, 1999's "", Ginuwine and Timbaland grew apart, and producers such as have crafted hits for him since then. In 2001, Ginuwine had a number-four hit on the with the single "Differences", which also peaked at number-one on the Billboard Hot R&B/Hip-Hop Singles & Tracks chart. Within a year, Ginuwine lost both of his parents. He later wrote a song which is featured on his "The Life" entitled "Two Reasons I Cry".

In 2002, Ginuwine was a feature artist on P. Diddy's number-one hit "I Need a Girl (Part II)". Later that year, Ginuwine started his own label, Bag Entertainment. The label would feature artists like Jose Cenquentez (who appeared on "The Senior") and Knight.

In May 2007, an album entitled "I Apologize" was released in stores. Although attributed to Ginuwine, the release was an unauthorized album only includes three Ginuwine songs - apparently from stolen masters - and ten songs by other artists. Ginuwine spoke against the unofficial release on both his page and through [YouTube|pURhMK6TOKo|Ginuwine - I Apoligize (2007) (February 26, 2007)] .

In 2007, Ginuwine also collaborated with Canadian hip-hop artist Belly in the latter's debut solo song "Pressure" which was featured in Belly's debut album the "Revoultion", released in June 2007.

Ginuwine has also formed a group with Tank and named TGT. Their first single was a remix of Tank's "Please Don't Go". They were supposed to tour but plans fells apart due to conflicting schedules [ [http://www.sohh.com/articles/article.php/11692 "SOHH Soulful: Tyrese, Ginuwine & Tank Form R&B Supergroup"] (May 23, 2007)] .

Ginuwine Announced on his Myspace Blog on August 21, 2008 that Due to label and legal issues They will not be able to release an official TGT album. [ [http://www.myspace.com/ginuwinemusic "Ginuwine's Official Myspace "] . Accessed August 23, 2008.]

Ginuwine is currently working on his 6th album, "". He is also the founder and CEO of LoveSong Incorporated after completing his contract with 550 Music/Epic.

Ginuwine introduced rapper Young Knight a.k.a. Knightron on the Back 2 Da Basics Album.Knightron is working on his own album with Ginuwines label BAG ENT. Album will be out soon.Knightron teamed up with Ginuwine for the song I Apologize.

Ginuwine was originally cast in the 2004 film "". Ultimately R&B artist was cast in his place. The writer of the movie kept Ginuwine's real name "Elgin" as the name for one the lead characters.

*Legendary rap group references Ginuwine, his signature hit "Pony" and his single "Only When Ur Lonely" in their single "Joint" that appears on the 1997 album release "Back In Business"

*Ginuwine stood in for in the music video for 's single "Everything's Going To Be Alright" featuring . Swing decided not to show up for the video shoot and Ginuwine was asked to appear in the video in Devante's absence so it would appear that the entire group was featured in the video.

*Ginuwine's very first music video appearance ever was as an extra in the video for popular DC area DJ/Rapper 's regional hit single "Reggae Dance". This 1988 single was a bonafide radio hit in the Washington DC area.

*Ginuwine's very first appearance with in a music video was not for Diddy's #1 hit single "I Need A Girl (Part II)" but for 's "Let's Go Through The Motions" which served as the first video and single off the motion picture soundtrack for the 1993 comedy film "" starring and . Diddy and Ginuwine were extras in this music video and this would mark the first time Ginuwine and Diddy appeared in a music video together. Ginuwine also contributed background vocals for this single.

In late 2007, early 2008, the song 'Baby' by Ginuwine was leaked on to the Internet via various blogs. The track was featured on Steve Clarke's ' [http://www.choicefm.com/article.asp?id=44181 Street Heat] ' radio show on London-based station [http://www.choice-fm.co.uk Choice FM] . 'Baby' is produced by and is featuring ' [http://profile.myspace.com/index.cfm?fuseaction=user.viewprofile&friendid=104489838 Shayal] ' who is an Indian/R&B producer / vocalist, living in London. The track is believed to be taken from Ginuwine's new album, however this is unconfirmed.