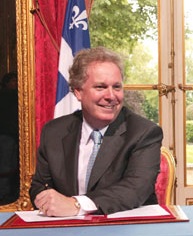 incumbent =
his/her = His
appointed_by =
governor =
first_minister =
date = , The Premier of Quebec (in French Premier ministre du Québec, sometimes literally translated as Prime Minister of Quebec) is the for the Canadian province of . The Premier is the province's and its title is Premier and President of the Executive Council.

The Premier of Quebec is nominally appointed by the Lieutenant-Governor of Quebec, vice-regal representative of the Queen in Right of Quebec, as president of the Executive Council. He or she is most usually the head of the party winning the most seats in the , and is normally a sitting member of the National Assembly. An exception to this rule occurs when the winning party's leader fails to win the riding in which he is running. In that case, he would have to be elected in a by-election. This has happened, for example, to in 1985. The role of the Premier of Quebec is to announce the legislative priorities on the opening speech of the National Assembly. He represents the leading party and must be trusted by the Assembly.

Note that French Canadians do not make the distinction between 'Premier' and 'Prime Minister', which are both termed 'Premier Ministre' in French.

The Premiers of Quebec are elected since the application of the ministry responsibility principle. This principle exists from the convention, since the 'Loi Constitutionelle de 1867' (Constitutional Law of 1867) doesn't mention it.