Carol II (15 October 1893 – 4 April 1953) reigned as King of Romania from 8 June 1930 until 6 September 1940. Eldest son of Ferdinand, King of Romania, and his wife, Queen Marie, a daughter of Prince Alfred, Duke of Edinburgh, the second eldest son of Queen Victoria. He was the first of the Romanian royal family who was baptized in the Orthodox rite.[1] 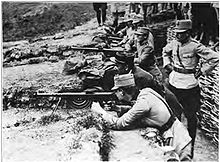 Carol was born in Peleş Castle. In November 1914, Carol joined the Romanian Senate, as the 1866 Constitution guaranteed him a seat there upon reaching majority.[2] Known more for his romantic misadventures than for any leadership skills, Carol (Romanian for "Charles") was first married in the Cathedral Church of Odessa, Ukraine, 31 August 1918, in contravention of royal law, to Joanna Marie Valentina Lambrino (1898–1953), known as "Zizi", the daughter of a Romanian general. They had one son, Mircea Gregor Carol Lambrino, and the marriage was annulled by decision of the Ilfov Tribunal in 1919.

He next married, in Athens, Greece, on 10 March 1921, Princess Helen of Greece and Denmark (who was known in Romania as Crown Princess Elena. They were second cousins as both were great-grandchildren of Queen Victoria. The marriage soon collapsed in the wake of Carol's affair with Elena "Magda" Lupescu (1895?–1977), the Roman Catholic daughter of a Jewish pharmacist and his Roman Catholic wife. Magda Lupescu had formerly been the wife of Army officer Ion Tâmpenu.

As a result of the scandal, he renounced his right to the throne on 28 December 1925 in favour of his son by Crown Princess Helen, Michael (Mihai), who became King in July 1927. Helen divorced Carol in 1928. Carol also had a son and a daughter by his mistress Maria Martini, a high-school student.

The apocryphal influence of King Carol on the selection of the first team is disputed. FIFA accept that "a decree from King Carol gave the players three months off from their jobs and a guarantee that they [would] be re-employed on their return. The king himself [was] also active as coach ..." [9] But there is nothing to substantiate such claims and the King, absent from the nation since 1925, only returned to Romania on June 8, 1930.

Returning to the country unexpectedly on 7 June 1930, Carol reneged on the renunciation and was proclaimed King the following day. For the next decade he sought to influence the course of Romanian political life, first through manipulation of the rival Peasant and Liberal parties and anti-Semitic factions, and subsequently (January 1938) through a ministry of his own choosing (the National Renaissance Front), with a constitution (27 February) reserving ultimate power to the Crown. In 1938, he banned the Iron Guard, which he had supported in the 1930s.

Carol also sought to build up his own personality cult to counter the growing influence of the Iron Guard, for instance by setting up a paramilitary youth organization known as Straja Ţării in 1935.

He was made the 892nd Knight of the Order of the Garter in 1938 by the United Kingdom.

Forced under first Soviet and subsequently Hungarian, Bulgarian, and German pressure to surrender parts of his kingdom to foreign rule, he was outmaneuvered at last by the pro-German administration of Marshal Ion Antonescu, and abdicated in favour of Michael. He was exiled to Mexico,[3] and he leased Upton House from Poole Corporation later in the 1950s.,[4] but ultimately settled in Portugal.

Carol and Magda Lupescu were married in Rio de Janeiro, Brazil, on 3 June 1947, Magda taking the title of Princess Elena von Hohenzollern. Carol remained in exile for the rest of his life. He was never to see his son, King Michael, after his 1940 departure from Romania. Michael refused to meet his father ever again.[5]

Carol died and was buried in Estoril, Portugal, in 1953; his remains were returned to Romania in 2003, at the Curtea de Argeş monastery. They lie outside the cathedral that is the burial place of most Romanian kings. Neither of his sons participated in either ceremony. His younger son and successor, King Michael, was represented by his daughter, Princess Margarita, and her husband, Radu Duda, Prince of Hohenzollern-Veringen. His eldest son, Carol Lambrino was forbidden (since 1940) to enter Romanian territory.