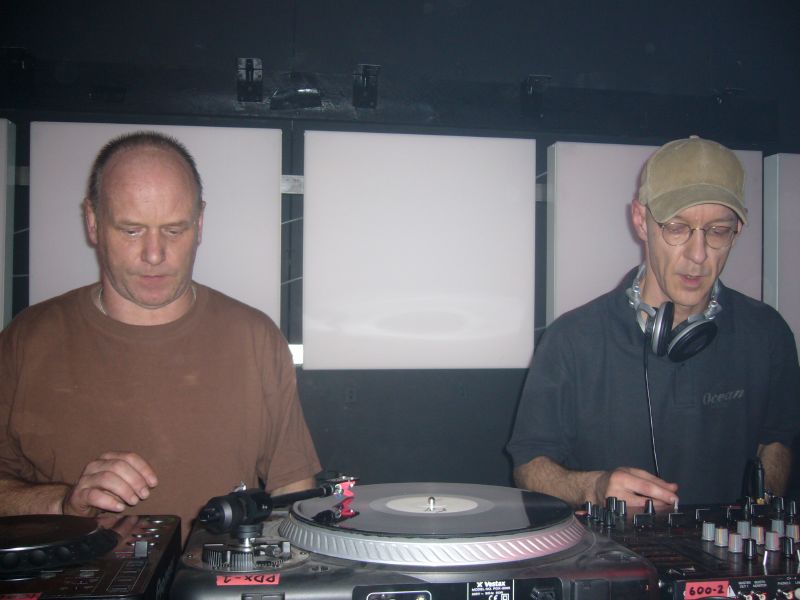 The Orb are an English group known for popularising in the 1990s and spawning the genre of . Founded in 1988 by and KLF member , The Orb began as ambient and dub DJs in . Their early performances were inspired by ambient and electronic artists of the 1970s and 1980s, most notably and . Because of their "trippy" sound, The Orb developed a cult following among s "coming down" from drug-induced highs.

Alex Paterson prides The Orb on manipulating obscure samples beyond recognition in their albums and concerts; however, his unauthorised use of other artists' works has led to disputes with musicians, most notably with .

The Orb's critical and commercial success in the UK peaked in the early 1990s with their albums "" and "", which reached #1 on the in 1992. This success led to their infamous appearance on "", where they showcased their quirky style by playing chess (an interest of Paterson's since his early youth) while the group's single "Blue Room" ran in the background. The Orb's mid-1990s albums were met with mixed reactions from UK critics; however, their work received praise from American publications such as "". They experimented with vocalists on their next two albums, which critics generally described as bland and uninspired. The Orb shifted to the minimalist techno style spearheaded by member Thomas Fehlmann, releasing their new material on the record label .

began his music career in the early 1980s as a for the rock band , for whom his childhood friend Martin "Youth" Glover played bass.

Throughout 1989, The Orb, along with Martin Glover, developed the musical genre of through the use of a diverse array of samples and recordings. The culmination of their musical work came towards the end of the year when The Orb recorded a session for on . The track, then known as "Loving You", was largely improvisational and featured a wealth of sound effects and samples from radio plays, nature sounds, and 's "Lovin' You".

In 1990, Paterson and Cauty held several recording sessions at Cauty's studio, . When offered an album deal by Big Life, The Orb found themselves at a crossroads: Cauty preferred that The Orb release their music through his label, whereas Paterson wanted to ensure that The Orb did not become a side-project of The KLF.

Following the split, Paterson began working with Youth on the track "". They incorporated samples from 's "" and vocal clips from an interview with in which she recalls picturesque images from her childhood.

In late 1991 and early 1992, Paterson and Weston wrote their next single, "Blue Room". Assisting with the recording was bassist , keyboardist , and guitarist Hillage. Despite its playing time of almost 40 minutes, "Blue Room" entered the UK charts at #12 and peaked at #8, making it the longest track to reach the UK singles chart. The Orb promoted this single with a "legendary avant-garde"

Over the next year and a half, Paterson and Weston continued to produce new material, but releases stalled when Paterson began to feel that Big Life was trying to dictate the direction of The Orb's music. This led to intense disagreements with Big Life and The Orb soon left the label to sign a deal with .

Following Weston's departure from The Orb, Thomas Fehlmann joined as a full-time studio member, though he would not always participate in live performances. Paterson, Hughes, and Fehlmann then finished producing the album "", on which Paterson and Weston had been working. "Orbus Terrarum", released in 1995, featured more "earthbound" and "organic" sounds than their previous trippy science fiction themed music.

Paterson and Fehlmann, along with usual collaborators Hughes, Burton, and Phillips, wrote and produced "Cydonia" for a planned 1999 release. Featured on the album were appearances from Robert Fripp, (Witchman), and Fil Le Gonidec, one of The Orb's live performers. Singers Nina Walsh and Aki Omori appeared on two tracks each, providing vocals and co-writing lyrics with Paterson. Paterson felt that this new direction of songwriting for The Orb was more similar to the experimental work of "Orbus Terrarum" than to the techno-pop of "Orblivion".

In 2001, Alex Paterson formed the record label as an outlet for Orb members' side projects. To promote both Badorb.com and "Cydonia", The Orb toured internationally, including their first visit to the United States in four years.

The Orb, now composed of Paterson, Phillips and Fehlmann, with guest John Roome, accepted an invitation to join the concert tour with , , and other alternative and electronic artists.

Though their musical style had changed somewhat since the 1990s, The Orb continued to use their odd synthetic sounds on 2004's "",

After two more EPs on Kompakt, The Orb (now composed of only Paterson and Fehlmann) released "", which featured new material in addition to tweaked versions of their previous Kompakt output. By this stage, the "" observed, Thomas Fehlmann had become the primary creative figure in The Orb, "inhibiting Alex Paterson's whimsical impulses". Because of this, "Okie Dokie" was considerably more focused and less "goofy" than "Cydonia" and "Bicycles & Tricycles".

In August 2006, the founders of The Orb - Paterson and Cauty - released "", their debut album as the with and Pratt's associate, Dom Beken.

The Orb's next studio album, "The Dream" was released in Japan in 2007 and the following year in the US and UK. Fehlmann is absent on "The Dream" and Paterson was instead reunited with Martin Glover and joined by Tim Bran of . The album features more of a return to The Orb's sounds of the early 1990s, with peculiar vocals and playful samples.

In Autumn 2008 a double-cd compilation of radio sessions called "" is to be released.

The Orb's members have drawn from an assortment of influences in their music.

The Orb has often been described as "The Pink Floyd of the Nineties",

During production of "Cydonia" and "Bicycles & Tricycles", Paterson's biggest influences were and music, as seen on the tracks "Ghostdancing", "Thursday's Keeper", and "Aftermath".

As chill out DJs in the late 1980s, The Orb often played to the needs of "the chemical generation" ( of the 1980s and 1990s), making music "to come down from drugs to". Paterson described The Orb's original intent as "basically about taking lots of drugs and going clubbing." Similarly, one of The Orb's early taglines was "Ambient house for the E generation". Often during interviews, Alex Paterson will smoke joints, including a 2003 interview with "The Guardian", where interviewer Will Hodgkinson noted the assorted "hash-smoking paraphernalia" around Paterson's apartment. Drug references often turn up in tracks, such as "72" from "Orblivion", which features a clip from Hair proclaiming "the youth of America on !". Another notable case is on "Little Fluffy Clouds", where the odd nasal tonality of ' voice is sometimes attributed to drug use, though Jones claimed that it was the result of a heavy cold.

Imagery has always been an important part of The Orb's persona.

The Orb is also been noted for their original album art, which features much of the same imagery as their live act. Noted graphic design group created the cover art for The Orb's earlier work, including "Adventures Beyond the Ultraworld", "U.F.Orb", and the singles from those two albums.

Some of the more prominent motifs in The Orb's work are outer space and science fiction, including alien visitations, , and . These have included The Orb's use of samples from serious sources such as transmissions to comedic clips from films like 's "Sleeper". "U.F.Orb" especially expressed a fascination with alien life with its bizarre sound samples and in the album's title itself. The title of its most popular single, "Blue Room", is itself a reference to the supposed Blue Room of , which was heavily investigated as a possible UFO evidence holding room. Their 2001 album, too, is named for a space-related subject, specifically the region of Mars. Due to Paterson's focus on science fiction and astronomical phenomena, "The Guardian" described Paterson as "pop [music] 's primary spokesperson on aliens".

In The Orb's early DJ events in the 1980s, Paterson and Cauty performed with three record decks, a cassette player, and a CD player all of which were mixed through an 12-track mixer. They used their equipment to harmonise recorded music and sound effect samples into an "endless sound continuum" for audiences of worn out dancers. Even after The Orb began producing original material, they kept the same sample-heavy model for live acts by spontaneously integrating obscure samples into their pre-recorded tracks. During promotional tours for "Adventures Beyond the Ultraworld" and "U.F.Orb", The Orb performed using a machine and experimented with other media sources such as s. The tape machines held individual chords, rhythms, and basslines for each composition, allowing The Orb to reprocess them and mimic the act of DJ-ing. Members could then easily improvise with these samples and manipulate them using sound effect racks. Often, The Orb had a live musician accompanying them, such as Steve Hillage on guitar. Their shows in the early 1990s would often be three hours of semi-improvised, continuous music featuring a wealth of triggered samples, voices, and pre-recorded tracks which were barely identifiable as the original piece.

The Orb began performing regularly at the in the early 1990s, where they used the high ceilings and large space for their "well-suited amorphous sound", frequently performing their newest and more experimental pieces there.

The Orb used recorders for performances from 1993 to 2001 and utilised large 48-track decks, which Paterson described as basically being a "studio onstage".

One of The Orb's most notable contributions to electronic music is their idea of blurring the distinction between sampling and remixing. Albums such as "Pomme Fritz", though released as a piece of original work, consist largely of manipulated samples. Conversely, The Orb's remixes typically use only small sections of the original track, most notably in the case of their single "Toxygene". "Toxygene" was originally commissioned as a remix of 's "Oxygene 8" from "".

Other artists have gotten agitated with The Orb sampling their work, though Paterson jokingly suggests that " [t] hey don't know the half of it." Paterson says that he finds a "beauty" and a "cleverness" with slipping unlicensed samples into compositions without anyone recognizing it. Even though fans often try to guess the origins of many of The Orb's samples, Paterson states that they are rarely correct and that they would "die" if they discovered, for example, where the drums on "Little Fluffy Clouds" originated from. He has said that record labels have cautioned him, "Don't tell anyone where you got your samples until we get them cleared!".

The Orb has used a wide variety of audio clips from sources ranging from speeches to prank phone calls by to ' apocalypse-driven rant from the film "Naked". Paterson obtains many samples from recording TV and radio for hours at a time and picking out his favorite clips. He and other members of The Orb record nature sounds for use on albums, most notably on "FFWD" and "Orbus Terrarum". The Orb's combination of ambient music and sampling from lower fidelity audio sources often creates a "fuzzy texture" in the sound quality, depersonalising The Orb's music. The Orb is lauded for their "Monty Python-esque levity" in their use of audio samples, though "NME" asserts that Paterson "sabotage [s] his majestic soundscapes" with "irritatingly zany" sounds.

The Orb has been a prolific remixing team, having completed over 80 commissioned remixes since 1989. Even during periods of label conflict and contractual limbo, The Orb found steady work remixing for artists including , , and . Though The Orb's remixes from the early and mid-1990s feature a large number of comical samples, "" describe them as "ahead of their time" and "NME" notes them as "not entirely incompatible with contemporary chilling." However, some pieces, such as their cover collaboration with , received criticism for being "beyond a joke" for their use of strange noises. The Orb's remix of ' "", too, was described as "silly", as they made it sound like was "drowning in his bathtub".