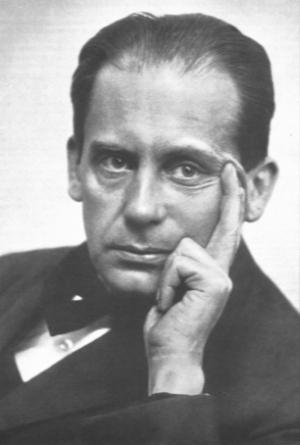 Walter Adolph Georg Gropius (, &ndash; , ) was a German and founder of [ [http://www.tate.org.uk/collections/glossary/definition.jsp?entryId=40 Bauhaus] , The Tate Collection, retrieved ] who along with , and , is widely regarded as one of the pioneering masters of .

Born in , Walter Gropius was the third child of Walter Adolph Gropius and Manon Auguste Pauline Scharnweber.Gropius married Alma Mahler (1879-1964), widow of . Walter and Alma's daughter, named Manon after Walter's mother, was born in 1916. When Manon died of polio at age eighteen, composer wrote his Violin Concerto in memory of her (it is inscribed "to the memory of an angel"). Gropius and Alma divorced in 1920. (Alma had by that time established a relationship with , whom she later married.) In 1923 Gropius married Ise (Ilse) Frank (d. 1983), and they remained together until his death. They adopted Beate Gropius, also known as Ati.

Walter Gropius, like his father and his great-uncle before him, became an architect. Gropius could not draw, and was dependent on collaborators and partner-interpreters throughout his career. In school he hired an assistant to complete his homework for him. In 1908 Gropius found employment with the firm of , one of the first members of the utilitarian school. His fellow employees at this time included , , and .

In 1910 Gropius left the firm of Behrens and together with fellow employee Adolf Meyer established a practice in Berlin. Together they share credit for one of the seminal modernist buildings created during this period: the Faguswerk in Alfeld-an-der-Leine, Germany, a shoe factory. Although Gropius and Meyer only designed the facade, the glass curtain walls of this building demonstrated both the modernist principle that form reflects function and Gropius's concern with providing healthful conditions for the working class. Other works of this early period include the office and factory building for the in .

Gropius's career was interrupted by the outbreak of in 1914. Called up immediately as a reservist, Gropius served as a sergeant major at the Western front during the war years, was wounded and almost killed.

Gropius' career advanced in the post war period. , the master of the Grand-Ducal Saxon School of Arts and Crafts in Weimar was asked to step down in 1915 due to his nationality. His recommendation for Gropius to succeed him led eventually to Gropius's appointment as master of the school in 1919. It was this academy which Gropius transformed into the world famous , attracting a faculty which included , , , , , and . Students were taught to use modern and innovative materials and mass-produced fittings, often originally intended for industrial settings, to create original furniture and buildings.

Also in 1919, Gropius was involved in the utopian expressionist correspondence under the pseudonym 'Mass'. Usually more notable for his functionalist approach, the "Monument to the March Dead", designed in 1919 and executed in 1920, indicates that expressionism was an influence on him at that time.

In 1923, Gropius aided by , designed his famous door handles, now considered an icon of 20th century design and often listed as one of the most influential designs to emerge from out of . He also designed large scale housing projects in , and from 1926-32 that were major contributions to the New Objectivity movement.

With the help of the English architect , Gropius was able to leave in 1934, on the pretext of making a temporary visit to Britain. He lived and worked in Britain, as part of the group with Fry and others and then, in 1937, moved on to the . The house he built for himself in Lincoln, , was influential in bringing to the US but Gropius disliked the term: "I made it a point to absorb into my own conception those features of the New England architectural tradition that I found still alive and adequate" (see [ [http://www.galinsky.com/buildings/gropiushouse/ Gropius House by Walter Gropius] ] ).

Gropius and his Bauhaus protégé both moved to to teach at the and collaborate on the company-town Aluminum City Terrace project in , Pennsylvania, before their professional split. In 1944, he became a naturalized citizen of the United States.

In 1945, Gropius founded (TAC) based in Cambridge with a group of younger architects. The original partners included , , , , , Louis A. MacMillen, and . TAC would become one of the most well-known and respected architectural firms in the world. TAC went bankrupt in 1995.

Gropius died in 1969 in , aged 86. Today, he is remembered not only by his various buildings but also by the district of in .

In the early 1990s, a series of books entitled was published covering his entire architectural career.

The building in , Berlin, known as the Gropius-Haus is named for Gropius' great-uncle, , and is not associated with Bauhaus.

*Tom Lehrer's comedic song "Alma" recounts the three husbands of Alma Werfel, including Gropius. Lehrer mentions Alma's marriage to Gropius following the death of her first husband, Gustav Mahler, singing,
::"While married to Gus she met Gropius::And soon she was swinging with Walter::Gus died and her teardrops were copious::She cried all the way to the altar::But he would work late at the Bauhaus::And only came home now and then::She said 'what am I running, a chow house?'::It's time to change partners again."

*In the episode of "The Simpsons" entitled "Dude, Where's My Ranch", the family is looking through a series of travel brochures trying to pick a vacation destination and Lisa holds up a brochure for "Walter Gropius' Bauhaus Village" to which Homer responds, "And fight the crowds? Forget it."

* [http://www.mastersofmodernism.com/?page=Hardware&item=1 Masters of Modernism]
* [http://www.historicnewengland.org/visit/homes/gropius.htm Walter Gropius' house, Lincoln, Massachusetts]
* [http://www.galinsky.com/buildings/gropiusinterbau/ On the Interbau apartments]
* [http://www.infed.org/schooling/b-vilcol.htm Impington Village College] &mdash; only example of Gropius's work in the UK
* [http://www.fagus-gropius.com/content/home/ Fagus works] de icon
* [http://www.mindspring.com/~cliofilm Bauhaus in America] is a documentary film made in 1995 that reveals the influence of Gropius and others on American design and architecture.
* [http://www.rosenthalusa.com/1288d872/GROPIUS_Walter.htm Designer portrait on rosenthalusa.com]
* [http://content.cdlib.org/view?docId=tf5779n7f0&chunk.id=bioghist-1.7.3&brand=oac More information on Gropius's early years at the Bauhaus] can be found in his correspondence with Lily Hildebrandt, with whom he had an affair between 1919-22: Getty Research Institute, California.