/ˈziːtə/; born Catherine Zeta Jones; 25 September 1969) is a Welsh actress. She began her career on stage at an early age. After starring in a number of United Kingdom and United States television films and small roles in films, she came to prominence with roles in Hollywood movies such as the 1998 action film The Mask of Zorro and the 1999 crime thriller film Entrapment. Her breakthrough role was in the 2000 film Traffic, for which she earned her first Golden Globe Award nomination for Best Supporting Actress – Motion Picture.

Zeta-Jones subsequently starred as Velma Kelly in the 2002 film adaptation of the musical Chicago, a critical and commercial success, and received an Academy Award, BAFTA Award, a Screen Actors Guild Award and was nominated for the Golden Globe Award for Best Actress – Motion Picture Musical or Comedy. Later, she appeared in the 2003 romantic comedy film Intolerable Cruelty and 2004 crime comedy film Ocean's Twelve. Zeta-Jones starred in the 2005 sequel of the 1998 film, The Legend of Zorro. She also starred in the 2008 biopic romantic thriller Death Defying Acts. In 2010, she won the Tony Award for Best Leading Actress in a Musical for her portrayal of Desiree in A Little Night Music.[1]

Zeta-Jones was born Catherine Zeta Jones in Swansea, Wales, to Patricia (née Fair), a seamstress of Irish descent, and David James Jones, a Welsh sweet factory owner.[2][3] She was named after her grandmothers, Catherine Fair and Zeta Jones.[4] She now hyphenates her name as "Catherine Zeta-Jones", accepting the mistake by the United States press early in her career.[citation needed]

Jones was educated at Dumbarton House School, a co-educational independent school in Swansea, but left early to further her acting ambitions. She then attended the independent The Arts Educational Schools in Chiswick, West London, for a full time three year course in musical theatre.

Zeta-Jones' stage career began in childhood. She often performed at friends and family functions and was part of local dance troupe the Hazel Johnson School of Dance which rehearsed at St Alban's Church, Treboeth. Zeta-Jones made her professional acting debut when she played the lead in Annie, a production at Swansea Grand Theatre. When she was 14, Mickey Dolenz cast her as Tallulah in Bugsy Malone.[citation needed] In 1986, at age 17 she had a part in the chorus of The Pajama Game at the Haymarket Theatre, Leicester starring Paul Jones and Fiona Hendley. The show subsequently toured the UK and in 1987, she starred in 42nd Street as Peggy Sawyer at the Theatre Royal, Drury Lane. She was cast in the leading role after both the actress playing Peggy Sawyer and her understudy fell ill. She also played Mae Jones in the Kurt Weill opera Street Scene with the English National Opera at the London Coliseum Theatre in 1989. After the show closed, she travelled to France where she played the lead role in French director Philippe de Broca's Les 1001 Nuits, her feature film debut.

Her singing and dancing ability suggested a promising future but it was in a straight acting role as Mariette in the successful British television adaptation of H. E. Bates' The Darling Buds of May that brought her to public attention and made her a British tabloid darling.[citation needed] She briefly flirted with a musical career, beginning with a part in the 1992 album Jeff Wayne's Musical Version Of Spartacus, from which the single "For All Time" was released in 1992. It reached #36 in the UK charts. She went on to release the singles "In the Arms of Love", "I Can't Help Myself", and a duet with David Essex "True Love Ways", reaching #38 in the UK singles chart in 1994.[citation needed] She also starred in an episode of The Young Indiana Jones Chronicles as well as in Christopher Columbus: The Discovery.[citation needed]

In 1990, Zeta-Jones participated in a television commercial for the German Deutsche Bahn at the age of 21, playing the part of a young woman eloping with her lover from a joyless marriage, a role which apparently helped in promoting her acting career.[5] She continued to find moderate success with a number of television projects, including The Return of the Native (1994) based on the novel of the same name and the mini-series Catherine the Great (1995). She also appeared in Splitting Heirs (1993), a comedy starring Eric Idle, Rick Moranis and John Cleese. In 1996, she was cast as the evil aviatrix Sala in the action film, The Phantom, based on the comic by Lee Falk. The following year, she co starred in the CBS mini-series Titanic, which also starred Peter Gallagher, Tim Curry and George C. Scott.

Steven Spielberg, who noted her performance in the mini-series Titanic, recommended her to Martin Campbell, the director of The Mask of Zorro.[6] Zeta-Jones subsequently landed a lead role in the film, alongside compatriot Anthony Hopkins and Antonio Banderas. She learned dancing, riding, sword-fighting and took part in dialect classes to play her role as Elena.[6] Commenting on her performance, Variety noted, "Zeta-Jones is bewitchingly lovely as the center of everyone's attention, and she throws herself into the often physical demands of her role with impressive grace."[7] She won the Blockbuster Entertainment Award for Favorite Female Newcomer and received an Empire Award nomination for Best British Actress and a Saturn Award nomination for Best Actress. 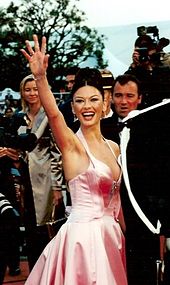 Zeta-Jones at the 1999 Cannes Film Festival.

In 1999, she co-starred with Sean Connery in the film Entrapment, and alongside Liam Neeson and Lili Taylor in The Haunting. The following year, she starred in the critically acclaimed Traffic with future husband Michael Douglas. Traffic earned praise from the press, with the critic for the Dallas Observer calling the movie "a remarkable achievement in filmmaking, a beautiful and brutal work".[8] Zeta-Jones' performance earned her her first Golden Globe nomination, as Best Actress in a Supporting Role in a Motion Picture[9] as well as many other nominations and acclaim.

She took the lead role of America's Sweethearts, a 2001 romantic comedy film which also starred Julia Roberts, Billy Crystal and John Cusack. The film received unfavorable reviews, with Los Angeles Weekly stating that the film "isn't just banal, it's aggressively, arrogantly banal."[10] However, it was a hit at the box office grossing over $138 million worldwide.[11] Her character in the film was Gwen Harrison who is a film star.

In 2002, Zeta-Jones continued her momentum and played murderous vaudevillian Velma Kelly in the film adaptation of the Broadway musical Chicago. Her performance was well received by critics; Seattle Post-Intelligencer stated, "Zeta-Jones makes a wonderfully statuesque and bitchy saloon goddess."[12] Slate magazine also praised her performance, saying that she "has a smoldering confidence that takes your mind off her not – always – fluid dancing – although she's a perfectly fine hoofer, with majestic limbs and a commanding cleavage."[13]

Chicago was a commercial success, grossing more than $306 million worldwide,[14] and received universal acclaim.[15] In 2003, Zeta-Jones garnered an Academy Award for Best Supporting Actress, a BAFTA Award for Best Actress in a Supporting Role, and two Screen Actors Guild Awards, for Outstanding Performance by a Female Actor in a Supporting Role and as a member of Outstanding Performance by a Cast in a Motion Picture for her performance. Also that year, she voiced Marina in the animated film Sinbad: Legend of the Seven Seas opposite Brad Pitt, as well as starring as serial divorcee Marilyn Rexroth in the black comedy Intolerable Cruelty with George Clooney.

In 2004, she played air hostess Amelia Warren in The Terminal as well as Europol agent Isabel Lahiri in Ocean's Twelve, the sequel to Ocean's Eleven. She and the cast members were nominated for the Broadcast Film Critics Association Award for Best Cast. In 2005, she reprised her role as Elena in The Legend of Zorro, the sequel to The Mask of Zorro. The film received negative-mixed reviews;[16] however, the critics acclaimed the individual performances of the actors, Banderas and Zeta-Jones. The Legend of Zorro grossed over $142 million worldwide.[17]

In 2007, she starred opposite Aaron Eckhart and Abigail Breslin in the American romantic comedy drama No Reservations, a remake of the German film Mostly Martha, for which she received a People's Choice Award nomination. The film garnered mixed or average reviews[18] but was successful commercially, grossing $92 million worldwide.[19] Claudia Puig of USA Today wrote that Zeta-Jones "shines as a character that finely balances off-putting reserve with sympathetic appeal."[20]

In 2008, starred alongside Guy Pearce and Saoirse Ronan in Death Defying Acts, a biopic about legendary escapologist Harry Houdini at the height of his career in the 1920s. The film was well received by many critics;[21] View London noted that "Zeta Jones also pulls off an extremely impressive Edinburgh accent and it's great to see her in a decent role for once."[22] In 2009, Zeta-Jones starred in romantic comedy The Rebound, in which she played a 40-year old mother of two who falls in love with a younger man, played by Justin Bartha. The film was released in cinemas in several countries throughout 2009. The film is set to be released in the United States on 25 December 2010.[23]

In August 2009, it was announced she would return to her musical roots and make her Broadway debut in the revival of A Little Night Music with Angela Lansbury, beginning December 2009. For her performance, Zeta-Jones received an Outer Critics Circle Award, Drama Desk Award, as well as a Tony Award for Best Leading Actress in a Musical.[24]

Apart from her acting career, Zeta-Jones is also an advertising spokeswoman, currently the global spokeswoman for cosmetics giant Elizabeth Arden. She has appeared in numerous TV commercials for the phone company T-Mobile, and one for Alfa Romeo. She is also the spokeswoman for Di Modolo jewellery. Zeta-Jones was appointed Commander of the Order of the British Empire (CBE) in the 2010 Birthday Honours.[25]

Dawn French and Jennifer Saunders parodied Zeta-Jones as a vacuous über-celebrity named Catherine Spartacus-Zeta-Douglas-Jones on their show French & Saunders in the series Back With a Vengeance. (Spartacus is a movie role memorably played by Zeta-Jones' father-in-law). Catherine Spartacus-Zeta-Douglas-Jones alternates between a strong Welsh accent and a strong American accent and uses Welsh-language phrases when she speaks.

Zeta-Jones is also parodied in the BBC's The Impressions Show with Culshaw and Stephenson by Debra Stephenson reading Beauty and the Beast also alternating between strong Welsh and American accents. Zeta is also mentioned in the song Hollywood by Marina and the Diamonds in the line "Oh my God, you look just like Shakira no, no, you're Catherine Zeta, actually my name's Marina".

Zeta-Jones met actor Michael Douglas, with whom she shares a birthday, and is exactly 25 years her senior, at the Deauville Film Festival in France in August 1998, after being introduced by Danny DeVito. They began dating in March 1999. Zeta-Jones claims that when they met, he used the line "I'd like to father your children."[28] They became engaged on 31 December 1999, and were married at the Plaza Hotel in New York City on 18 November 2000, just weeks after Douglas' divorce was finalized. A traditional Welsh choir (Côr Cymraeg Rehoboth) sang at their wedding. Her Welsh gold wedding ring includes a Celtic motif and was purchased in the Welsh town of Aberystwyth.[29] They have two children. Their son, Dylan Michael Douglas (named after Dylan Thomas), was born on 8 August 2000, with Zeta Jones' pregnancy incorporated into her role in Traffic. Their daughter, Carys Zeta Douglas, was born on 20 April 2003.

Zeta-Jones has two brothers, David and Lyndon.[30] Her younger brother, Lyndon Jones, is her personal manager and producer for Milkwood Films.

In 2004, Douglas and Zeta-Jones took legal action against stalker Dawnette Knight, who was accused of sending violent letters to the couple that contained graphic threats on Zeta-Jones' life. Testifying, Zeta-Jones said the threats left her so shaken she feared a nervous breakdown.[31] Knight claimed she had been in love with Douglas and admitted to the offences, which took place between October 2003 and May 2004. She was sentenced to three years in prison.