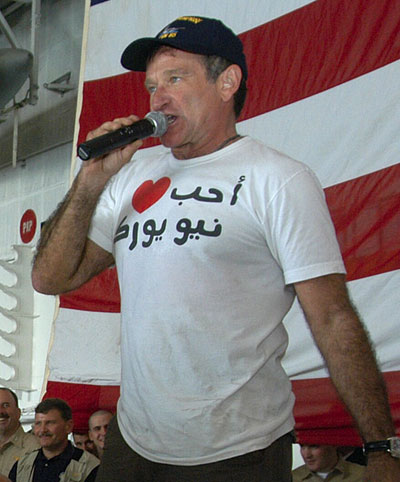 Williams has described himself as a quiet child whose first imitation was of his grandmother to his mom. He did not overcome his shyness until he became involved with his high school drama department. [cite episode | title = Robin Williams: 'The Night Listener' | url = http://www.npr.org/templates/story/story.php?storyId=5602441 | medium = Radio | network = | airdate = 2006-08-03 | series = Fresh Air from WHYY | credits = Terry Gross (host)] In high school, he won an award for "Most Likely To Not Succeed". [mentioned on the November 17, 2006 "" interview]

In 1973, Williams was one of only 20 students accepted into the freshman class at Juilliard. Williams, along with , were the only students accepted by into the Advanced Program at the school that year. Reeve and Williams had several classes together in which they were the only two students. In their s class, Williams had no trouble mastering all dialects quickly, whereas Reeve was more meticulous about it. Williams's manic comedy did not impress all of his teachers, but his dramatic performances impressed everyone. Williams and Reeve developed a close friendship, and they remained good friends for the rest of Reeve's life. Williams visited Reeve after the horseback riding accident that paralyzed him from the neck down and cheered him up by pretending to be an eccentric Russian doctor (similar to his role in ""). Williams claimed that he was there to perform a . Reeve stated that he laughed for the first time since the accident and knew that life was going to be okay.

After appearing in the cast of the short-lived "" on , he was cast by as the alien Mork in a guest role in the TV series "". [ [http://www.youtube.com/watch?v=k6S9IEAE_s0 YouTube - Happy Days - Richie Meets Mork ] ]

As Mork, Williams improvised much of his dialogue and devised plenty of rapid-fire verbal and physical comedy, speaking in a high, nasal voice. Mork's appearance was so popular with viewers that it led to a hit television , "", which ran from 1978 to 1982. Williams became an overnight sensation, and Mork was featured on posters, coloring books, lunchboxes, and other merchandise.

After some encouragement from his friend , he was set to make a guest appearance in the 1991 "" episode, "A Matter of Time", but he had to cancel due to a scheduling conflict; [cite web
first =
coauthors =
title = Biography for Robin Williams
publisher = Internet Movie Database
url = http://www.imdb.com/name/nm0000245/bio
doi =
accessdate = 2008-04-13] took his place as a time-traveling , Professor Berlingoff Rasmussen.

Williams also appeared on an episode of the American version of "" (Season 3, Episode 9: November 16, 2000). During a game of "Scenes from a Hat", the scene "What Robin Williams is thinking right now" was drawn, and Williams stated "I have a career. What the hell am I doing here?" [cite episode
title = Episode 9
series = Whose Line Is It Anyway?
serieslink = Whose Line Is It Anyway?
airdate = 2000-11-16
season = 3]

The majority of Williams' acting career has been in film, although he has given some memorable performances on stage as well (notably as in a production of "" with ). His performance in "" (1987) got Williams nominated for an Academy Award. Many of his roles have been comedies tinged with , for example "" and "".

His role as the Genie in the "Aladdin" was instrumental in establishing the importance of star power in casting. Later, Williams once again used his voice talents in "", as the holographic Dr. Know in the 2001 feature "", the 2005 animated feature "Robots", the 2006 Academy Award winning "", and an uncredited vocal performance in 2006's "". Furthermore, he was the voice of , a former attraction at the Resort about a time-traveling robot who encounters and brings him to the future.

Williams has also starred in dramatic films, earning himself two subsequent Academy Award nominations: First for playing an unorthodox and inspiring English teacher in "" (1989), and later for playing a troubled homeless man in "The Fisher King" (1991); that same year, he played an adult in the movie "Hook". Other acclaimed dramatic films include "" (1990) and "What Dreams May Come" (1998).

In 1998, he won an Oscar as Best Supporting Actor for his role as a psychologist in "". However, by the early 2000s, he was thought by some to be typecast in films such as "Patch Adams" (1998) and "Bicentennial Man" (1999) that critics complained were excessively . In 2006 Williams starred in "The Night Listener", a thriller about a radio show host who realizes he's developed a friendship with a child who may or may not exist.

He is known for his wild improvisational skills and s. His performances frequently involve impromptu humor designed and delivered in rapid-fire succession while on stage. According to the "Aladdin" DVD commentary, most of his as the Genie was improvised. He is a talented mimic and can jump in and out of characters and various accents at an extremely fast pace.

He was portrayed by in the "Behind the Camera: The Unauthorized Story of Mork & Mindy" (2005), documenting the actor's arrival in as a struggling comedian and becoming an overnight star when he landed the role in "Mork & Mindy".

Robin Williams has done a number of stand-up comedy tours since the early 1970's. Some of his most notable tours include An Evening With Robin Williams (1978), Robin Williams: At The Met (1986) and Robin Williams LIVE on Broadway (2002). The latter broke many long held records for a comedy show. In some cases, tickets were sold out within thirty minutes of going on sale.

In August 2008, Williams announced a brand new 26-city tour titled "Weapons of Self Destruction". After a six year break from his record breaking tour, Robin decided the time was right to perform again due to the material that could be generated by a presidental election. Also, he was quoted as saying that this was his last chance to make cracks at the expense of the current Bush Administration. [robinwilliams.com]

During the late 1970s and early 1980s, Williams had a serious addiction to ; he has since quit. Williams was a close friend and frequent partier alongside . He says the death of his friend and the birth of his son prompted him to quit drugs: "Was it a wake-up call? Oh yeah, on a huge level. The helped too".

On August 9, 2006, Williams entered himself into a rehabilitation center for . His publicist delivered the announcement: "After 20 years of sobriety, Robin Williams found himself drinking again and has decided to take proactive measures to deal with this for his own well-being and the well-being of his family. He asks that you respect his and his family's privacy during this time. He looks forward to returning to work this fall to support his upcoming film releases." [cite news | title = Robin Williams Enters Rehab for Alcohol | date=August 9, 2005 | publisher = People | url = http://www.people.com/people/article/0,26334,1224730,00.html | accessdate = 2007-04-28]

Robin Williams has gone on record as a fan of the series "", and incorporated a scene referencing it in "" where he purchases an action figure of it as a gift.

He also enjoys and is a big fan of former , .

Williams and his former wife, Marsha, founded the Windfall Foundation, a philanthropic organization to raise money for many different charities. Williams devotes much of his energy doing work for charities, including the Comic Relief fund-raising efforts. In December 1999, he sang in French on the BBC-inspired music video of international celebrities doing a cover of the Rolling Stones's "It's Only Rock & Roll" for the charity Children's Promise. [cite news | title = Stones cover enters festive race | url = http://news.bbc.co.uk/1/hi/entertainment/558252.stm | publisher = BBC NEWS | date = 1999-12-10]

Williams has performed for four years with the USO for U.S. troops stationed in Iraq.