The Legend of Zorro

The Legend of Zorro

The Legend of Zorro is a 2005 sequel to The Mask of Zorro (1998), both directed by Martin Campbell. Antonio Banderas and Catherine Zeta-Jones reprise their roles as the titular hero and his spouse, and Rufus Sewell stars as the villain. The film, which takes place in San Mateo County, California, was shot in San Luis Potosí, Mexico with second-unit photography in Wellington, New Zealand.[1]

In 1850 (10 years after the events of the first film), the people of California are voting to decide whether or not to join California as a state. During one of the votes, a wild gunman named Jacob McGivens, attempts to steal the box of votes. Before he makes off with the votes, however, Zorro appears and chases after him and his men. Zorro succeeds in recapturing the votes, but in their scuffle McGivens manages to pull off Zorro's mask. A pair of Pinkerton agents see the face of Zorro, recognizing him as Don Alejandro de la Vega. Zorro then makes a make-shift mask out of his costume and rides off on his stallion, Toronado, to deliver the votes to the governor.

Upon returning to his mansion, Alejandro is greeted by his loving wife, Eléna. Eléna believes that Alejandro can now give up being Zorro, but Alejandro is sure that the people will still need him. Angered of Alejandro's neglecting his wife and son while going out as Zorro, Eléna kicks him out of the house. The next day, after sending her now 10-year-old son, Joaquin to school, Eléna is confronted by the Pinkertons, who reveal that they know who Zorro really is. Soon after, Alejandro is served with divorce papers from Eléna.

Three months later, Alejandro is living in a hotel, depressed over the separation from Eléna and not having been summoned as Zorro in all this time. His friend and childhood guardian, Father Felipe, convinces him to attend a party at a French count's new vineyard, and there Alejandro finds out that Eléna has been spending time with the count and her former schoolmate, Armand. Later, after drinking himself stupid, Alejandro witnesses a huge explosion go off close to Armand's mansion and becomes suspicious of his ex-wife's long-time friend.

Afterwards, McGivens and his men attack a peasant family, the Cortezes, who is Alejandro's friend, in order to seize their land deed. Zorro succeeds in rescuing Guillermo's wife and infant son, but McGivens shoots Guillermo just before disappearing with his gang, the deed to the Cortez home in hand. Zorro subsequently stakes McGivens out at Armand's mansion to confirm his suspicions and finds out that Armand wanted Cortez's land to build a railroad. At the same time, he encounters Eléna, who has been doing undercover espionage for the Pinkertons and discovered that Armand is to receive a mysterious shipment.

Zorro tracks McGivens to a cove where the count's cargo is being delivered. However, on a class trip nearby Joaquin has also come across McGiven's gang and hitched a ride. Zorro saves his son, who does not recognize him, from the bandits, but the only clues he is able to retrieve are a piece of the cargo - a bar of soap - and the name Orbis Unum from one of the crate lids. Felipe and Alejandro learn that Armand is the head of a secret society, the Knights of Aragon, which secretly ruled Europe in the past. Armand plans to throw the United States, which is perceived as a threat to the Knights' power, into chaos before it can gain too much power to be kept in check.

Sometime later, Alejandro is captured by the two Pinkertons and is told that they black-mailed Eléna into divorcing him and getting close to Armand to find out his plans; since California isn't yet a state, they couldn't conduct a legal investigation. Joaquin stumbles upon his father's whereabouts and frees him from prison. Zorro then heads over to Armand's mansion, while Eléna also arrives there. After meeting up, they eavesdrop on Armand's meeting and learn that the soap bars actually contain glycerin - a precursor to nitroglycerin, which Armand plans to distribute throughout the Confederate Army, with the help of Confederate Colonel Beauregard, to destroy the Union. After confessing her involvement with the Pinkertons, Eléna then heads back to the mansion before Armand gets back, and Zorro prepares to destroy the train carrying the explosive shipment. Meanwhile, McGivens arrives at Felipe's church to look for Zorro, but ends up shooting the priest and kidnapping Joaquin.

At the mansion, Armand is informed by his butler Ferroq about Eléna's deception and, showing her the bodies of the Pinkerton agents, brutally confronts her with his knowledge. He takes her and Joaquin hostage and prepares to take her on the train, forcing Zorro to stop his own sabotage and getting himself captured. He is unmasked in front of his wife and son, much to Joaquin's shock. Joaquin and Eléna are taken away by Armand, while McGivens is tasked with killing Alejandro; but unexpectedly, Felipe arrives and helps Alejandro overpower McGivens, who is killed when a drop of nitro lands on his head. Felipe then reveals that the crucifix around his neck shielded him from McGivens' bullet, and Alejandro goes to save Eléna and Joaquin.

Zorro catches up with and lands - along with Toronado - inside the train, and engages Armand in a sword fight. Meanwhile, Eléna has Joaquin escape and then fights Ferroq in the nitro storage car, eventually stuffing a bottle of nitro into his trousers and pushing him off the train just as it approaches its rendezvous point with Colonel Beauregard, killing them in the resultant explosion. Joaquin, unwilling to be left behind, collects Toronado and rides after the train.

Further along the tracks, under the eyes of a huge crowd, the governor is signing the bill that will make California a state. As the train gets closer, Joaquin has Toronado hit a track switch, causing the train to pass around the governor's car. Zorro and Armand's duel takes them to the very front of the locomotive; however, the track is a dead end blocked by a large pile of rails. Zorro hooks Armand to the train and escapes with Eléna. The train plows Armand into the block, killing him and causing the nitroglycerin to detonate, destroying the train. With Zorro as an official witness, the governor later signs the bill, and California becomes the 31st state of the United States of America.

Later, Felipe gets Alejandro and Eléna remarried with Joaquin as the only witness. Alejandro apologizes to his son for not telling him the truth, and he admits that Zorro's identity is a family secret rather than just his own. Eléna then allows Alejandro to continue being Zorro, accepting that it is who he is, and Zorro rides off on Toronado to his next mission.

Doug Jones was set to cameo at the film's end as Abraham Lincoln, but he had to leave the role to film Doom.[2]

An alternate ending, included on the DVD, shows a grown-up Joaquin putting on his father's Zorro costume and riding off into the sunset, as the elderly Alejandro and Eléna watch proudly. This was changed to the theatrical ending in order to allow for future sequels with Antonio Banderas and Catherine Zeta-Jones. 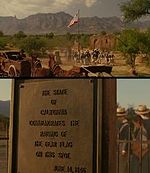 The Legend of Zorro features a fictional monument called Bear Point, commemorating the site where the original Bear Flag of the California Republic flew briefly in 1846. Although the actual flag flew in Sonoma County, the film suggests that Bear Point is located in San Mateo County.

The Legend of Zorro continues its predecessor's inclusion of historical elements of California history into the fiction, though many liberties have been taken. Alejandro, the Mexican-born Californian who became Zorro at the end of The Mask of Zorro, is a fictional brother to Joaquin Murrieta, for whom the character's son Joaquin is named. Military governor Bennet Riley, the last of California's heads of state prior to statehood, is portrayed, but the Maryland-born American is played by the Mexican actor Pedro Armendáriz Jr., and speaks English with a Hispanic accent. Leo Burmester plays R. S. Beauregard, a Confederate colonel whose character is not to be confused with the historical P. G. T. Beauregard. Pedro Mira plays pre-Presidential Abraham Lincoln as an observer to California's statehood, though the real Lincoln never traveled to the region.

The Legend of Zorro, which takes place in 1850, includes a significant number of deviations from history, particularly in depicting an organized Confederate States of America and a (presumably, though this is not explicitly stated) completed First Transcontinental Railroad, each more than a decade before their times. Furthermore, a deleted scene on the film's DVD features a short discussion on a magic lantern presentation. Additional deviations include a quote from the Gettysburg Address, which would not be written until 1863. A map discovered by Zorro delineates two states (Arizona and New Mexico) that did not achieve statehood until 1912. Several other states depicted on the map were also entered into the Union long after California.

Critical reaction to The Legend of Zorro was mostly mixed to negative. The film currently holds a rating of 47 out of 100 on Metacritic,[3] and a 25% rating on Rotten Tomatoes.[4]

Roger Ebert of the Chicago Sun-Times gave the film a below-average review, awarding it one and a half stars (out of four), commenting that "of all of the possible ideas about how to handle the Elena character, this movie has assembled the worst ones."[5] James Berardinelli of ReelViews gave The Legend of Zorro two stars (out of four), saying that "the action is routine", "the chemistry between the two leads, which was one of the highlights of The Mask of Zorro, has evaporated during the intervening years", and that the movie "fails to recapture the pleasure offered by The Mask of Zorro."[6]

Stephanie Zacharek of Salon.com praised the film, calling it "entertaining, bold, and self-effacing at once", noting the civic and parental questions it raises.[7] Slate Magazine critic David Edelstein also praised the film, in particular the action scenes, villains, and chemistry between Banderas and Zeta-Jones.[8] Mick LaSalle of the San Francisco Chronicle said the film was "watchable—not remotely enjoyable, but watchable."[9] Nathan Rabin of The Onion's A.V. Club gave the film a lukewarm review, saying that "director Martin Campbell doles out action sequences stingily" but added that "The Legend of Zorro still feels like a half-hearted shrug of a sequel."[10]

Brian Lowry of Variety said that The Legend of Zorro is "considerably less charming than The Mask of Zorro" but added that the film "gets by mostly on dazzling stunt work and the pleasure of seeing its dashing and glamorous leads back in cape and gown."[11] Lisa Schwarzbaum of Entertainment Weekly awarded the film a "B-" score. Schwarzbaum said that "too many scenes emphasize gross butchery over the elegance of the blade", but added that the film is "well-oiled" and praised the "fancy fight sequences".[12]

Stephen Hunter of Washington Post reacted negatively, calling The Legend of Zorro "a waste of talent, time, and money" and "stupid and boring".[13] Marc Savlov of the Austin Chronicle was also not impressed, remarking that "there are precious few things for a Zorro fan – or a film fan, for that matter – not to loathe about The Legend of Zorro."[14]

The film did reasonably well at the box-office, grossing $142,400,065 internationally, but did not match the success of its predecessor.[15]