The Goonies is a 1985 American adventure-comedy film directed by Richard Donner. The screenplay was written by Chris Columbus from a story by executive producer Steven Spielberg. The premise surrounds a band of pre-teens who live in the "Goon Docks" neighborhood of Astoria, Oregon hoping to save their homes from demolition. After discovering an old Spanish map, they head off on an adventure to unearth the long-lost fortune of One-Eyed Willie, a legendary 17th-century pirate.

The Goonies, a group of friends living in the "Goon Docks" neighborhood of Astoria, Oregon, face foreclosure on their families' homes from the expanding Astoria Country Club. On one of their last days their morale sinks particularly low due to Mikey's older brother having failed his driver's license exam, thwarting their plans to "cruise the coast in style" during their "last Goonies weekend." While rummaging through the Walshes' attic, they find an old newspaper clipping, a Spanish map, and an artifact relating to a rumor of a lost but not forgotten pirate treasure somewhere in the area. Hearing the call of adventure, Mikey tries to persuade his friends to join him in search for the treasure hoarded by a pirate named One-Eyed Willie. Initially reluctant, the group eventually decides to evade the authority of Mikey's older brother, Brandon, and escape for one last "Goonie adventure."

They head down the coast and stumble upon a derelict seaside restaurant that seems to match coordinates set by the map and an old doubloon, unaware that the Fratellis, a family of fugitives, are using the restaurant as their hideout. After first encountering the family, the Goonies come back after the Fratellis have left and discover their criminal intents, and send Chunk, the group's clumsy, heavy-set dreamer and teller of tall tales, to get help. However, the Fratellis return before they can leave, forcing the Goonies to use a cavern underneath the restaurant to escape. The Fratellis capture Chunk and interrogate him, learning nothing until a pack of bats burst out of the cavern beneath the restaurant. Chunk is placed in the same room with the forsaken and deformed Fratelli brother, Sloth, while the rest of the Fratellis enter the cavern and follow the Goonies' trail.

As the Goonies traverse the cavern, Mikey discovers that it matches up with the map and convinces the rest of the group to continue to follow it to find the treasure. They overcome many deadly traps set by One-Eyed Willie, and eventually arrive at a large underground cavern and a lagoon where Willie's ship, the Inferno, lies waiting. While others begin to fill their pockets with the riches on the ship, Mikey finds Willie's skeleton, and reverently acknowledges him as the "first Goonie", leaving part of the treasure with him as tribute. However, as the Goonies exit the hold, they are caught by the Fratellis, who take their treasure and force the kids to walk the plank. The Goonies are saved by the timely arrival of Chunk and Sloth, now close friends, who help the rest of the group to shore. With the children no longer a threat, the Fratellis ransack the rest of the ship, including the share of the treasure Mikey left for Willie. This sets off a final booby trap, causing the cave to begin collapsing. The Goonies flee through a hole in the cave, finding themselves on a beach. Two passing policemen spot them and call in for help.

The Goonies are soon reunited with their parents while the Fratellis are arrested and Chunk offers to take Sloth into his home. As Mikey frets about the end of their last adventure, Rosalita, the Walshes' maid, discovers that Mikey's marble bag contains a large handful of jewels taken from the ship. Mikey's father quickly estimates that its value is more than enough to save everyone's homes. As the families celebrate, they spot the unmanned Inferno, now free of the cave, sailing away. 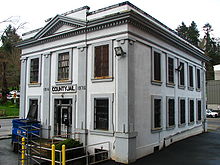 The old Clatsop County Jail, scene of the Fratelli jail break. The site is now home to the Oregon Film Museum. 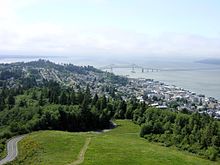 Much of the filming was done on-location in Astoria, Oregon, the setting of the film

Principal photography on The Goonies began on October 22, 1984 and lasted five months. There was an additional six weeks of ADR recording.[1] The shooting script was lengthy, over 120 pages, and several sequences were eventually cut from the final theatrical version. During the film's denouement, mention is made of an octopus which seems like an exaggeration of the actual events but actually refers to a scene that was excised from the final cut.

In The Making of The Goonies, director Richard Donner notes the difficulties and pleasures of working with so many child actors. Donner praises them for their energy and excitement, but says that they were a handful when brought together. The documentary frequently shows him coaching the young actors and reveals some of the techniques he used to get realistic performances. One of these tricks involved One-Eyed Willie's ship, which was actually an impressive full-sized pirate ship created under the direction of production designer J. Michael Riva. Donner forbade the child actors from seeing the ship until they filmed the scene wherein it is revealed to their characters. The characters' first glimpse of the ship was thus also the actors' first view of it, bringing about a more realistic performance. It was later noted that the full-sized version of the ship was destroyed after shooting because they could not find anyone who wanted it.

In his book There and Back Again, Sean Astin claims that Richard Donner and Steven Spielberg were "like co-directors" on the film as he compares and contrasts their styles when directing scenes.

The museum where Mikey's father works is, in reality, the Captain George Flavel House Museum.

Film critics were generally favorable toward The Goonies. Review aggregator Rotten Tomatoes reports that 63% of critics have given the film a positive review, based on 41 reviews, with an average rating of 6/10 and the critical consensus: "An energetic, sometimes noisy mix of Speilbergian [sic] sentiment and funhouse tricks that will appeal to kids and nostalgic adults alike."[2] At Metacritic, which assigns a normalized rating out of 100 to reviews from film critics, it has a rating score of 60, indicating "mixed or average reviews".[3] Several reviewers noted that the film appeared to be enjoyable for children and teens, but not so much for adults.[4]

The Goonies grossed US$9 million in its opening weekend in the US, second on the charts behind Rambo: First Blood Part II.[5] It grossed over US$61 million that year, placing it among the top ten highest-grossing films of 1985 (in the US).[6]

Ramsey won a Saturn Award for Best Supporting Actress in a Film for her role.[7]

The Goonies was first released on VHS video in the United States in March 1986 and the laserdisc and CED versions also debuted that year. Warner Home Video released a theatrical widescreen laserdisc on January 29, 1992.

Warner Home Video released The Goonies in widescreen on Region 1 DVD on August 21, 2001. The DVD featured several notable extras, including:

Warner Home Video released The Goonies on Blu-ray Disc in October 2008 in Europe. The video is 1080p high definition VC-1 and accompanied by a Dolby TrueHD soundtrack. Extras mirrored that of the DVD release:

The special features are presented in 480i/576i standard definition.

Konami created two versions of The Goonies for the MSX (The Goonies) in Japan and Europe, and Family Computer (The Goonies) in Japan. The Goonies II was also released on the Famicom (and its international counterpart, the Nintendo Entertainment System ). The Goonies II was both released in North America, Europe and Australia, although the original was one of the NES games released as part of the Nintendo Vs. System arcade machine in the 1980s. The Goonies II had little to do with the film, but achieved a following for its inventive gameplay. In it the Fratellis have managed to kidnap all of the Goonies (except Mikey, whom the player guides) and hide them in hidden cages across a terrain of caverns, mazes and abandoned buildings. As Mikey, the player must rescue them all and ultimately free a mermaid named Annie.

Datasoft produced a Goonies video game for 8-bit computers including Commodore 64, ZX Spectrum, Amstrad CPC, Atari and Apple II. This game featured eight screens in which a player had to use two members of the Goonies group to solve puzzles and reach an exit to advance to the next stage. The screens were largely inspired by actual sets and puzzles seen in the film. A reference to the aforementioned "octopus scene" is included, as the seventh level.

In February 2007, DaimlerChrysler's Jeep division sponsored The Goonies: Return to Astoria, a Flash based game, developed by Fuel Industries. The player's goal is to collect map pieces and doubloons, and then race the Fratellis to One-Eyed Willie's treasure.[9][10]

The Goonies: Original Motion Picture Soundtrack featured music by Cyndi Lauper, REO Speedwagon, The Bangles, and others. The cast members (except Kerri Green) appeared alongside professional wrestlers "Rowdy" Roddy Piper and "Captain" Lou Albano in the 12 minute "The Goonies 'R' Good Enough" music video. Steven Spielberg makes a cameo appearance. Lauper also has a cameo in the film, performing the song on TV, although the song was not completed until after filming.

Dave Grusin's score was unavailable for 25 years. The main theme, "Fratelli Chase", has been used in numerous trailers (such as Innerspace and Guarding Tess), and was re-recorded by Grusin and the London Symphony Orchestra for the album Cinemagic. The score makes liberal use of the Max Steiner-composed theme from Adventures of Don Juan.[11]

Soundtrack label Varèse Sarabande released the score in March 2010 in a limited edition of 5000 copies.

The possibility of a film sequel has been confirmed and denied many times in recent years by the original cast and crew. Donner said that he had a story he liked and Spielberg behind him, but in 2004 several of the actors from the original revealed that Warner Bros., the film's owner, had shown no interest in a sequel. [13] Sean Astin told MTV in October 2007 that Goonies 2 "is an absolute certainty... The writing's on the wall when they're releasing the DVD in such numbers,"[14] Donner has expressed doubt that the sequel will ever happen, as many of the actors had not shown interest in returning for a sequel.[15] Corey Feldman stated in his November 25, 2008 blog post, "NO! There is no Goonies 2! I'm sorry but it's just not gonna happen.... Course now that I've said that, they'll do it."[16] However, on the July 2010 release of "The Making of a Cult Classic: The Unauthorized Story of The Goonies" DVD,[17] Richard Donner states a sequel to The Goonies is a "definite thing" and will involve as much of the old cast as possible. "It will happen," says Donner. "We've been trying for a number of years."[18]

Rumors of adaptations and sequels in other media took off in 2007, including a comic book miniseries,[19] an animated television series, and a musical adaptation of the film. Corey Feldman said he was asked to reprise the role of Mouth in a cartoon series that would feature the original Goonies characters as adults and focus on the adventures of a new set of kids.[20] Apparently this project was briefly in the works for Cartoon Network before being shelved.[21] Entertainment Weekly reported in March 2007 on a potential musical adaptation of the film. "Steven and I have discussed it, and it's something that I'm fairly passionate about right now," Donner says.[22] Variety reported in October 2008 that Donner had met with Broadway entertainment attorney John Breglio, and is "confident things are moving in the right direction."[12] As of May 2011, the musical is still in the beginning stages, but Donner is hopeful that an "irreverent" script will be completed by October.[23]