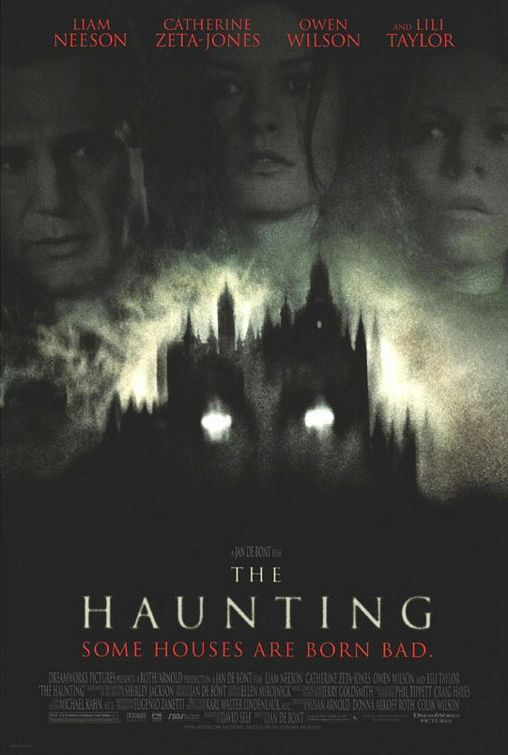 When her invalid mother dies and her sister evicts her, Eleanor "Nell" Vance (Taylor) receives a phone call, telling her about an ad for an study run by Dr. David Marrow (Neeson) at Hill House - a secluded manor in . Upon arrival, Nell meets Mr. Dudley (Bruce Dern) and Mrs. Dudley (Marian Seldes), a strange pair of caretakers who don't stay on the property after dark, and then two other participants in the study, wild Theo (Zeta-Jones) and "bad sleeper" Luke Sanderson (Wilson).

Unknown to the participants, Dr. Marrow's true purpose is to study the psychological response to fear. Each night, the caretakers chain the gate outside Hill House, preventing anyone from getting in or out until morning, when the caretakers open the lock. There are no working telephones inside Hill House and cell phone service is available there. The house was chosen because of its isolation from the outside world.

On their first night at the mansion, Dr. Marrow relates the legend of Hugh Crane - an tycoon who built Hill House. According to Dr. Marrow's telling of the legend, Crane's wife killed herself before the house was finished, which drove Crane insane. As he tells the story, an accident causes Marrow's research assistants to leave the house, leaving the doctor alone with the study participants for the duration of the study.

The first night, Theo and Nell begin to experience strange phenomenon within the house, including strange noises, inexplicable temperature changes. Dr. Marrow placates Theo with explanations centered around the old house's plumbing, but Nell remains unconvinced. Her experiences intensify. Eventually, she sees apparitions, but everyone else in the house believes that she's making up stories for attention. Nell is confronted after the main hallway is vandalized with the words "Welcome Home, Eleanor", and becomes extremely distraught, setting out to prove that the house is haunted by the souls of those victimized by Crane's cruelty. She learns that Crane built his fortune by exploiting kidnapped children for slave labor and murdering them when they were of no more use to him. She also learns that Crane had a second wife named Carolyn, to whom Nell is distantly related, her great-great-granddaughter.

When Dr. Marrow reveals the dual nature of his study, Theo and Luke believe the pressures of being confined to the house are causing Nell to suffer a . Dr. Marrow finally comes to his senses and decides they must leave. At that moment, a statue in a nearby fountain comes to life and attempts to drown him. After experiencing more terrifying phenomena, the four flee the house but are they trapped on the property. During that time, Nell asks Dr. Marrow how he knew the house wanted her (referring to phone call she received earlier). He doesn't know about any call and says the first time he spoke to Nell was at the house. When Luke tries to crash the gate with Nell's Gremlin, he fails and is trapped in the car. The car is leaking gasoline and Dr. Marrow and Theo free Luke from the car. While they are helping Luke, Nell goes back into the house, knowing that she can't leave the children to be hurt by Crane. Luke, Theo, and Dr. Marrow go in search of Nell. Once they find her, she reveals her relation to Carolyn and how she must stay and help the children. The other three try to run but Hugh Crane's evil spirit seals up the house, trapping them inside.

Theo, Luke and Dr. Marrow try to break windows to get out, but have no success and eventually, Dr. Marrow cuts his hand. While Nell and Theo tend to Marrow, Luke destroys a painting of Hugh Crane, out of frustration and against Nell's warnings. Crane's spirit, then, drags Luke to the fireplace where he's decapitated by a lion-headed flue.

Nell tells Dr. Marrow and Theo they have to hide. When Nell runs to try and hide, she realizes that she must avenge the souls of Crane's victims and invokes Crane's spirit to manifest and is able to lead him towards a huge iron door with the inscription "All Ye Who Stand Before These Doors Shall Be Judged" engraved on it. An avenging wind howls throughout the room and s from the gates of pull Crane's spirit into it. Nell is thrown into the door and dies with her arms outstretched as a Christ figure, while her spirit floats from her body and rises up to with the spirits of Crane's victims. After witnessing Nell's death, Theo and Dr. Marrow wait by the gate outside till the Dudleys come in the morning.

When Mr. Dudley asks Dr. Marrow if found what he wanted to know, Dr. Marrow doesn't give an answer. When the gate opens, he and Theo silently walk out and down the road, leaving Hill House behind them.

This film was originally to have been a collaboration between Steven Spielberg (mainly, as director) and Stephen King (as screenwriter), but the two had creative differences and went their own way. King instead wrote the teleplay for "Rose Red", a television miniseries that shares many elements with Jackson's source novel, "", and the character of the real-life edifice "", in San Jose, California.

, in England, was used as the exterior of the house, while many of the interior sets were built inside the dome-shaped hangar that once housed "", near the permanently docked "" steamship, in .

Argentine production designer ("Restoration" - 1995 and "What Dreams May Come" - 1998) oversaw the set designs.

Difference with the novel

In Jackson's source novel, the Luke Sanderson character (played here by ) survives his stay at Hill House. Also, the novel's Eleanor dies in suicide when her car crashes headlong into a tree just outside the House.