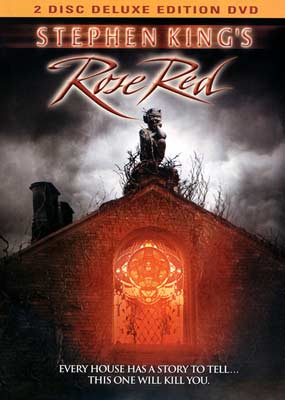 
"Rose Red" (also known as "Stephen King's Rose Red") is a scripted by horror novelist . The series was first broadcast in the United States on ABC in . The story involves a mansion called Rose Red being investigated by parapsychologist Dr. Joyce Reardon and a team of psychics.

Marketing of the film presented the movie as based on actual events. A was published that is based on King's script called "" (2001) under the Joyce Reardon, Ph.D., and claimed to be the actual of Ellen Rimbauer. Speculation that Stephen King or his wife had written the book raged until was revealed as the novel's author.

A DVD, running 4 hours and 14 minutes, has also been released.

Several references are made to other fictional works regarding ghosts, including "" and "".

A team of s are led by Dr. Joyce Reardon, a psychology professor, into the decrepit mansion known as Rose Red in order to get scientific proof of ghosts. The mansion was thought to be haunted and quite a few people disappeared or were killed there. Her efforts unleash various spirits and uncovers the horrifying secret of the house itself - it's alive, hungry, and insane.

The History of Rose Red

Rose Red was built in 1906 by John Rimbauer for his wife, Ellen. Before it was built it seemed to have malicious intent; three construction workers were killed on site in addition to the first foreman being murdered by a worker. After the house was built it continued to take lives.
The Rimbauers' daughter April and actress named Deanna Pietri disappeared while the Rimbauers lived in the home. A drinking buddy of John Rimbauer died of a bee sting in the Solarium, Rimbauer's ex-business associate hanged himself in front of Rimbauer's children, John Rimbauer himself fell to his death from the tower and Ellen Rimbauer disappeared one night many years later.
During tours of the house with the historical society various people also disappeared. Eventually the tours were stopped and the house fell into a dormant state.

In the year 1991, a young Annie Wheaton is shown drawing a picture of a house as her parents and older sister, Rachel, argue outside her room. As she draws lines down over the house in her picture, rocks fall through the roof of an identical house belonging to an elderly couple down the street.

Ten years later, Professor Joyce Reardon is finishing a lesson on psychic phenomena. Kevin Bollinger, a reporter for the campus newspaper questions her about a possible trip she will be taking to Rose Red. Under the orders of Carl Miller, one of Reardon's rival professors, he follows Reardon to a meeting with the group of psychics she is taking to Rose Red. This includes Victor, an elderly precognate with heart problems; Pam, a young psychometric woman; Cathy, an automatic writer; Nick, whose exact talents remain unknown; and Emery, a post-cognate who lives with his overbearing mother. Also included is Steven Rimbauer, the last descendent of Ellen and John Rimbauer. Bollinger takes a photo of the group joining hands in a circle, which is published in the campus newspaper, along with an article humiliating Reardon. Miller takes Kevin to Rose Red before Reardon in order to get more embarrassing photos. Kevin is greeted by Sukeena at the front door, who tells him that he is expected. Kevin gets stuck in the solarium, where he is pulled upwards off-screen and killed by an unseen force.

When Joyce and the psychics (with the addition of an older Annie Wheaton) arrive, a phantom draft occurs immediately after Annie enters and slams the door shut. The psychics are introduced to the strange and surreal rooms upstairs, such as the "perspective hallway", an upside-down room, and a library with a mirrored floor. The team finds Bollinger's cell phone near the kitchen. This angers Steve and he calls Professor Miller to tell him that they know he sent Bollinger, later his camera is found in the Mirror Library. That night, Emery and Pam have dreams involving a decomposing Bollinger, and the Wheaton sisters are visited by a ghost under the bed and in the closet. While Cathy is visited by something under the carpet and her blankets Pam is lured into the garden.

The next morning, Steven calls Professor Miller again to discuss Bollinger. At the university, Miller receives a voice message from Steven saying that Bollinger killed himself. Miller frantically drives to the mansion, where he meets Emery's mother. Emery's mother has also driven to the mansion, worried because she hasn't been able to reach Emery on the phone. Their cars collide in the driveway when Emery's mother sees someone run across the road. She leaves her car and begins to run through the forest on the grounds of the mansion, with Miller chasing her. As she is running through the woods she is calling for Emery. Emery hears her but thinks it is the house playing tricks and ignores her.

At the same time Victor is being led into the garden by what appears to be Pam only to discover her corpse in a pond under a statue. He pulls on Pam's nightgown which comes away to show nothing beneath it. he panics and begins to run, when he turns to look back he sees the statue come to life. This triggers a heart attack. Victor stumbles to a window where he can see Emery and tries to enter through it. But Emery believes that he is another apparition and refuses to open the window, Victor collapses and dies from his heart attack as Nick tries to break the window open. At this time Emery's mother is attacked and dragged off by Bollinger.

While Nick is trying to reach Vic, Annie tries to reach the miniature of Rose Red by using a chair. When she falls and is knocked unconscious the doors open. Sister and Steve see Annie fall and Steve cares for Annie while Sister gets what he asks and finds Joyce. Once Joyce is found she cares for Annie while she is unconscious. As soon as the doors open Emery runs outside to look for his mother. He hears a noise in the woods and, protesting to himself the whole time, goes in to see if he can help. He runs into Professor Miller who can say nothing but stay away. Emery chases after him to try to help but loses him and goes back to the house. Miller is then attacked by Bollinger.

After Emery returns to the group he decides it is time to leave and has an encounter with Pam and the movie star. During his encounter Annie awakes and the doors slam shut, removing four of Emery's fingers in the process. While the others are assisting Emery, Joyce realizes Annie is holding the windows and doors closed and asks her to continue to keep the doors and windows sealed, promising her the miniature replica of Rose Red that stands on a shelf in the room where the team spends most of its time. Steven Rimbauer discovers that he is able to communicate with Annie telepathically but claims that she remains distant "like a princess at the top of a tower", however Annie warms to Steven through these interactions. Steven also experiences childhood memories where, during a visit to the house with his drunken mother, Ellen Rimbauer appeared to him and invited him to join her.

Emery informs the group of is suspicion that Annie is keeping the house sealed and Nick confirms this, as well as the fact that Bollinger was alive when he dragged Emery's mother into the house but he has since hung himself in the Mirror Library. At this point, the group speculates that Rose Red is a dormant, rather than dead, cell that feeds off of Annie and Steven, whose psychic abilities are amplified when he is in the house because of his familial connection and Nick guesses that Joyce brought the psychics to the house in hopes that the house would reawaken from their influence, particularly Annie's. Emery continues to upset the group with his talk of killing Annie and running. Cathy grows weary of his babble and goes to the kitchen for some ice tea. Here she is attacked by Emery's mother and Nick rescues her from being choked to death. The pair decides it is best to leave her alone in the kitchen and not tell Emery so that he does not become worse. The house changes on the and they find themselves in a different hall then when they started. Here a mysterious shape under the carpet chases them and Nick shoves Cathy into a room and slams the door behind her. He is not seen again. Cathy opens the door and looks for Nick then tries to find her way back again. Somehow she winds up in the attic where she is hit with the urge to write as she witnesses the murder of John Rimbauer by Sukeena and his wife. Steve and Sister decide to go looking for Nick and Cathy and follow the hall to the attic stairs. Cathy is then rescued by Steve from an attack by who they initially perceive to be the specter of Ellen Rimbauer but realize it is in fact April Rimbauer due to her withered arm.

As the group reunites Emery attempts to attack Annie but she fends him off by manipulating a suit of armor. After the attack and defense Cathy and Steve decide to see what they can learn from Annie by having her write. Things begin to explode as Annie writes and Cathy writes "help us" and "Open the doors". As the house becomes more unstable the windows and doors slam and glass shatters from its panes. The remaining people in the group -- Annie, Rachel, Steven, Emery, Joyce and Cathy -- make their escape. Joyce refuses to leave the house. Emery and Steve are attacked by the specters of Emery's mother and Ellen Rimbauer and Annie prevents Ellen from coming after them. As the group flees the house, Joyce is locked in and surrounded by the house's victims.

The survivors visit Rose Red six months later, after it has been commissioned to be demolished and replaced by the condominium, to pay their last respects with red roses.

has a as a pizza delivery man.

was used as the backdrop for the house.

Thornwood Castle, used in the movie as the house is located in Tilacoom, a suburb of .

* Annie is similar to Carrie, the main character from Stephen King's first published novel, "Carrie". As a young girl she dropped stones on her house and Annie does that at the end of the miniseries as well as at the beginning.

*Rose Red is referenced in Black House as one of the places where "slippage" occurs.

*In The Langoliers, from King's quartet Four Past Midnight, another character named Nick H. exists, also with a British accent.