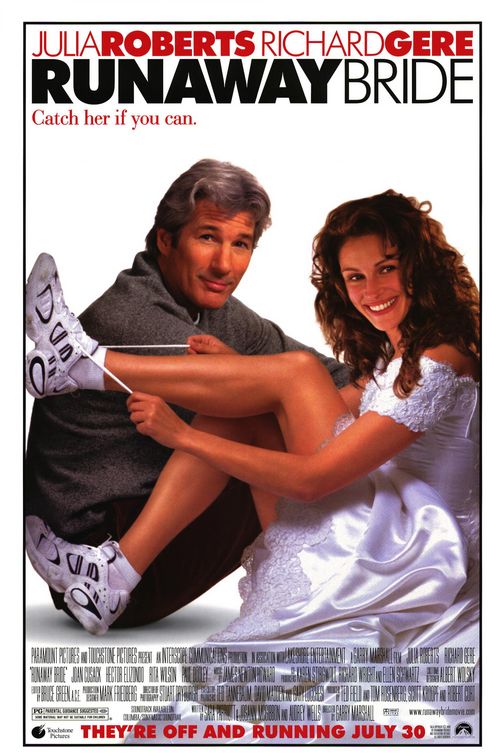 "Runaway Bride" is a 1999 starring and and directed by . While not as successful at the box office as the previous movie the three made together (also guest starring ), "", the movie was, nevertheless, a hit among moviegoers. It eventually earned over $152 million at the U.S box office. [ [http://www.imdb.com/title/tt0163187/business Runaway Bride (1999) - Box office / business ] ]

Julia Roberts plays Maggie Carpenter, a spirited and attractive young woman who has had a number of unsuccessful relationships. Maggie, afraid of being married, has left a trail of boyfriends. Indeed, she's left three men waiting for her in church during wedding day (all of which are caught on tape), getting her fame and the dubious nickname "Runaway Bride".

Meanwhile, in New York, reporter Ike Graham (played by Gere), writes a column about her that contains several factual errors. He's fired for it and then decides to write an in-depth article about Maggie in a bid to get his job back. He travels to Hale, , where he finds her living with her family and on her fourth attempt to become married. The fourth groom-to-be is Bob, a football coach at the local high school who treats Maggie like a mental patient.

After Ike forces Maggie to face her fears, the two find themselves becoming more and more attracted to each other. In the meantime, Maggie is still set to marry Bob, and so does her best to ignore her feelings for Ike. The situation in Ike's corner is similar; being divorced once himself, he's looking for love as well, but knowing that Maggie must make the decision to be with him over Bob, he does his best to stay out of it.

In the midst of the wedding rehearsal, Bob stands in for the priest, and asks Ike to stand in his place as the groom. This proves to be a mistake, when Ike and Maggie "practice" the kiss right in front of Bob. As a result, Bob punches Ike in the face before storming out of the church. Soon after, Ike and Maggie agree to marry since the wedding is already set to take place.

But on the day of the wedding, Maggie gets cold feet, and leaves Ike, too, standing at the altar. As she rides away on a FedEx truck, Ike runs after her, but can't catch up.

Later, when Ike returns to New York, he finds Maggie making friends with his cat, Italics. Maggie then explains why she's been running and "turns in" her running shoes just before proposing to Ike. The two are married in a private ceremony outside, on a hill. In the end, they are shown riding away on horseback.