Doom is a 2005 science fiction horror film, loosely based on the Doom series of video games created by id Software. It was directed by Andrzej Bartkowiak.

In an interview with executive producer John Wells, he stated that a second film would be put into production if the first was a success at the box office.[5] Ticket sales for the opening weekend totaled more than US$15.3 million, but promptly dropped to $4.2 million in its second weekend and the story for a sequel was never written.

On Mars in the year 2046, in the Union Aerospace Corporation (UAC) Olduvai Research Facility, scientists are attacked and pulled into the darkness by an unseen monster. Doctor Carmack (Robert Russell) transmits a warning about a Level 5 security breach before the door behind him is torn open. He turns around and sees something through the gap.

On Earth, a team of eight Marines - (Sarge, Reaper, Duke, Destroyer, The Kid, Portman, Goat and Mac) known as the RRTS (Rapid Response Tactical Squad) are preparing to go on leave. Their leave is cancelled when the squad leader, Sarge (Dwayne Johnson), receives new orders. Contact with Olduvai has been lost and the RRTS is being sent to investigate. The Mars station is quarantined and the 85 UAC employees on Mars are not allowed to return to Earth. As the men suit up, Sarge pulls aside John "Reaper" Grimm (Karl Urban) and asks him not to go because Reaper's sister is on the station. Reaper suits up anyway, and their team is deployed to Mars via a teleportation device called the "Ark", located at Area 51. The Ark was discovered in 2026, and scientists have been studying it. The team meets an early victim of the Ark system, Pinky (Dexter Fletcher), who "went to one galaxy while his ass went to another" during an Ark teleportation event (his lower torso is now a two-wheeled engine resembling a Segway). They meet up with Dr. Samantha Grimm (Rosamund Pike), Reaper's sister.

Their mission is simple: eliminate the threat, secure the facility and retrieve UAC property. Reaper converses with his sister and learns that they discovered humanoid remains on Mars, which unlike humans have an extra chromosome pair which granted them invulnerablity to disease as well as advanced cellular regeneration. The team locates Carmack, who has gone mad to the point of tearing off his own ear. They return him to the lab and Grimm tries sedating him. The Marines explore the facility, encountering creatures intent on killing them. An Imp slays Goat (Ben Daniels) before being killed by Reaper and brought to Dr. Grimm. Blood samples taken from two hostile creatures reveal that they were human. Dr. Grimm determines that their genetics have been altered by the addition of the Martian chromosome; however, the chromosome seems to "choose" whether it causes the person to be superhuman or a monster, apparently able to determine on a genetic level whether a person has the capacity to be evil. The chromosome is spread by the ovipositors of those infected. The Marines discover that Carmack deliberately injected the chromosome into an "evil" subject (prisoner Curtis Stahl, a multiple murderer), who later transformed and broke loose.

Multiple attacks by the Hell Knight monster kill Mac, Destroyer and Portman, reducing the squad to Sarge, Reaper, The Kid (Al Weaver), and Duke (Raz Adoti). The surviving team realize that the Hell Knight has escaped through the Ark to the Earth due to Pinky's refusal to trigger a grenade Mac left with him to destroy the Ark. Sarge takes the Bio Force Gun, dubbing it the "Big Fucking Gun."

The group finds the UAC facility on Earth full of corpses. Sarge orders his men to kill anything alive in order to prevent the infection from spreading. The Kid finds a group of non-infected humans, and Sarge kills him for insubordination when he refuses to kill them. Pinky reappears, aiming a pistol at Sarge, but is dragged off by the Hell Knight.

Zombies attack, killing Duke and dragging Sarge through a malfunctioning bulletproof screen. Reaper is hit by a ricochet. To save his life, Dr. Grimm injects Reaper with Chomosome 24. Instead of becoming a monster, Reaper awakens as a superhuman with enhanced strength and healing abilities.

Following Reaper's transformation and the discovery that Dr. Grimm is missing, the movie takes on a first-person shooter perspective. Within a few minutes, Reaper slays an array of monsters, including the Hell Knight and Pinky, who has mutated into a Demon.

Switching back to a standard camera angle, Reaper emerges at the facility's exit. Bodies are scattered everywhere, and a melted blue hole in the wall, the mark of a BFG blast, is still cooling. Reaper encounters Sarge and an unconscious Samantha lying on the floor. Asked what happened to the non-infected survivors, Sarge replies that he "took care of that problem"- he has killed them. Reaper notices the same injury on Sarge that Carmack had before he turned into an Imp, something Sarge has been hiding. After spending their last ammunition- Reaper's half of a magazine and Sarge's one round in the BFG, the two Marines battle hand to hand. As he pins Reaper against a wall, Sarge begins transforming, developing features such as a prominent skull structure, sharp teeth and white eyes. Reaper throws Sarge into the Ark, followed by a grenade. Sarge and the Ark are obliterated. Reaper retrieves Dr. Grimm, who is conscious but unable to walk, and holds her in his arms as he returns to the Earth's surface. 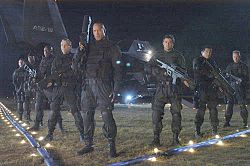 The film's producer, John Wells, admitted in an interview that "many" video game movie adaptations had "sucked." He revealed that the crew was able to get "a lot of financial support from Universal" and that it wasn't "done on the cheap." Wells also revealed that the Doom movie would have a sequence shot in a first-person perspective because "Doom without that would be a miscarriage of justice!"

Wells also revealed that "we were all very concerned that we make sure that it was exactly the kind of experience that we [the crew] remembered so fondly from the game: turning the lights off at midnight, cranking it up and scaring the hell out of yourself!"

Wells further stated that there is a balance between CGI and prosthetics in the Doom movie, and he, for the first time as a producer, admitted that "we didn't wanna rely on the CGI. Those effects still haven't quite got to the level where you fully believe it — certainly not for long periods of time," and that the crew used Stan Winston's Creature Shop and that his work is only "enhanced with CGI." He also admitted that "if you rely too much on CGI it can look cheesy: it doesn't quite work. It'll get there, but it's not there yet."

Wells has stated that the crew insisted that the Doom movie be made into an R-rated movie and that he didn't "think it was possible to do a PG-13 version—and that's been the mistake made by a couple of other computer game movies," and that "a lot of studios didn't want to do it. But we made a conscious decision that we'd prefer not to make it any other way."

Wells also revealed that if this first Doom film is successful, a second one could be made, and that "we certainly have some ideas for the next one, if there is gonna be one. We'll have to wait and see: the audience will have to tell us ..."

One of the most noteworthy aspects of the film is a short sequence near the end of the film where the camera follows the progress of Grimm from a first-person perspective in homage to the original game. In the words of Karl Urban, the actor who plays Reaper:

Doom received mostly negative reviews by critics. The review aggregator Rotten Tomatoes reported that 19% of critics gave the film positive reviews, based on 128 reviews. Roger Ebert says, "Doom is like some kid came over and is using your computer and won't let you play."[11] Richard Roeper has also stated, "The performances are awful, the action sequences are impossible to follow, the violence is gratuitous, the lighting is bad and I have my doubts that the catering truck was even up to snuff on this project." One apparently good review came from Richard James Havis from The Hollywood Reporter, stating, "There's so little to go wrong that those who like their entertainment mindless and violent will find little fault." In 2009, Time listed the film on their list of top ten worst video games movies.[12]

The response from fans of the video game was mixed. Many expressed disappointment because the film did not follow the plot of the game, as the games dealt with an invasion from hell instead of a virus, and over the movie's failure to reproduce the game's most essential quality: the killing of large numbers of enemies. It did well on its opening weekend, taking in $15.5 million. However, it quickly dropped in its second week in theaters and the final gross of the film was only $28.2 million domestically and almost $56 million worldwide, with a budget of $60 million. Dwayne Johnson was nominated for a Razzie Award as Worst Actor.

The film's score was composed by Clint Mansell. A remix of the Nine Inch Nails song You Know What You Are? appears at the beginning of the first person shooter ending credits. Switchback by Celldweller was used in the trailer.