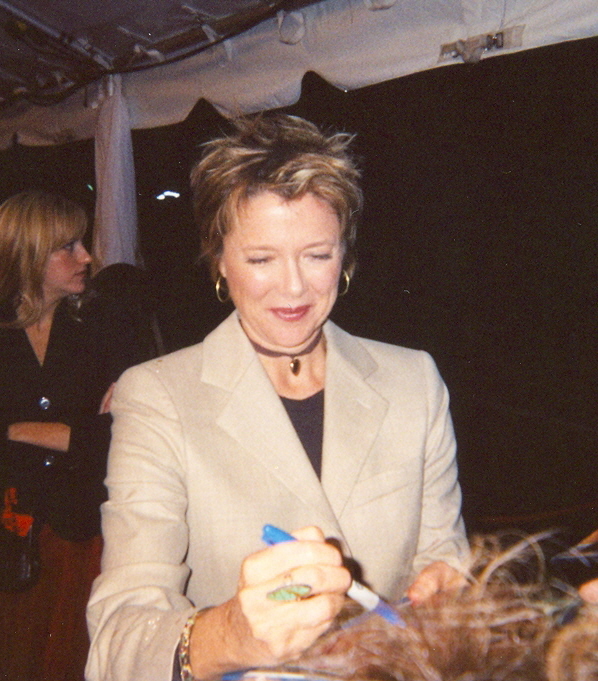 Annette Francine Bening (born , ) is an -nominated and -, - and -winning American actress.

She then spent a year working as a cook on a charter boat taking fishing parties out on the Pacific Ocean, and scuba diving for recreation. She attended , then completed an academic degree in theatre arts at . Bening joined the acting company at the in San Francisco while studying acting as part of the Advanced Theatre Training Program. During this time she established herself as a formidable acting talent in roles like Shakespeare's Lady Macbeth.

Bening moved to New York City, where she debuted off-Broadway at () in the role of 'Holly Dancer' in 's widely acclaimed "Coastal Disturbances" (1987) opposite . However, despite the praise and recognition, it took some time for that success to translate to her film career. Her television debut was with the made-for-TV movie "Manhunt for Claude Dallas" (1986). Her first major role in a theatrical feature was in "The Great Outdoors" (1988) playing 'Kate Craig' opposite and . Her next role was as the Marquise de Merteuil in "Valmont" (1989) opposite .

Bening's next major feature, 's "The Grifters" (1990) starring and , met with critical acclaim. She received an Academy Award nomination for Best Supporting Actress for "The Grifters". She followed that with her appearance in "". Bening was offered the role as in "" (1992), but after she became pregnant, the role went to . In 1994 she played opposite 90-year old acting legend in . Bening was paid $3 million to play the role of 'Elise Kraft/Sharon Bridger' in "" (1998) co-starring and . Her next role, in the 1999 film "American Beauty", would give her the highest-profile role of her career thus far. Bening played a real-estate agent in three different movies: "", "American Beauty", and "". She has appeared in three different ' movies: "", "", and ""

She was originally cast as the mother in Disney's "Freaky Friday", but dropped out. She replaced in her most recent appearance, "Running with Scissors", playing Deirdre Burroughs in the film adaptation of the book. On December 9, 2006, Bening hosted with musical guests and .

Bening is a council member for the .

In 1985, she and her first husband, choreographer J. Steven White, moved to , to work at the Shakespeare Festival [ [http://www.coloradoshakes.org/Colorado] Dead link|date=March 2008] in . They separated the following year.

She and met on the set of "" (1991), in which she played , and the two began a secret romance. They married in 1992. She and Beatty live in with their four children, Kathlyn Elizabeth Beatty (born in ), Benjamin Maclean Beatty (born in ), Isabel Ira Ashley Beatty (born ) and Ella Corinne Beatty (born , ). Her marriage to Beatty provided an additional push to her career, simply because of the large amount of publicity surrounding the romance and marriage; Beatty had been a life-long "most eligible bachelor" and was considered a , before he met Bening.

She is a student of .

For awards, see the Infobox.

For awards, see the Infobox.

For , see the Infobox.