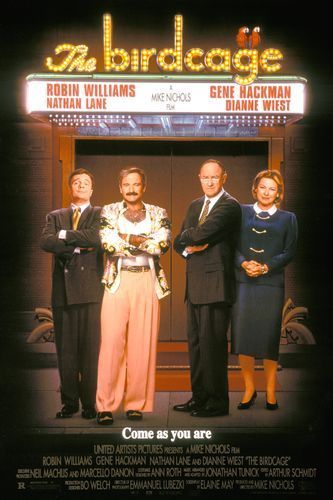 Val Goldman (Futterman) and Barbara Keeley (Flockhart) are engaged to be married, and have decided to have their families meet. Val's father, Armand Goldman (Williams), owns The Birdcage, a . His lover is Albert (Lane), who appears regularly as "Starina," the show's star . Barbara's father, however, is ultraconservative Republican Ohio Senator Kevin Keeley (Hackman), co-founder of the right-wing "Coalition for Moral Order" and up for re-election this year.

Fearing their reaction if they learn the truth about Val's parents, Barbara tells her parents that Armand is a cultural to , that Albert is both a woman and a housewife, and that they divide their time between Greece and Florida; she also changes the family's last name from Goldman to Coleman to hide their background.

At this point, Kevin receives a phone call: Senator Jackson, Kevin's colleague and co-founder of the Coalition for Moral Order, has been found dead in the bed of an underage black ; the event receives a large amount of coverage in the media. Louise Keeley (Wiest) then proposes a visit to meet their new in-laws as diversion to save Kevin's political career: It will give them an excuse to get out of town, and Barbara's marriage into a "traditional, wholesome" all-American family will give the Senator excellent PR material.

Barbara phones Val in South Beach about the lies she has told her parents. After much persuasion, Val eventually convinces Armand to go along with the farce. Armand has the house redecorated in a more austere manner, and begins remaking himself as an unassuming, conventional, heterosexual American male. He gets in touch with Val's mother Katherine Archer (Baranski), and asks her to join in the charade he's planning; she agrees.

Despite the changes to the house and Katherine's help, Armand realizes that Albert's outlandish, effeminate mannerisms will be a giveaway as to the true nature of the Goldman household. Armand gently requests that Albert not be present for the dinner party that evening; Albert becomes offended and threatens to leave Armand entirely. A compromise is reached where Albert remains and acts as Val's uncle, but this soon falls apart when Albert cannot effectively pretend to be straight male. Another fight ensues and Albert locks himself in his bedroom.

Meanwhile, the Keeleys are traveling to South Beach, trying to evade the who are tailing their car. As the evening draws nearer, Agador (Azaria), the Goldmans' flamboyant, gay housekeeper, has been made into a butler and chef for the evening, despite the fact that he cannot cook and never wears shoes.

The Keeleys arrive at Armand's residence, but Katherine, who is to play Val's mother, ("Mrs. Coleman") is still not there - she is stuck in traffic. Everyone engages in awkward small talk but Armand is nervous, even more so because Katherine has not arrived. Kevin and Louise, meanwhile, are worried that Armand's nervousness is because he has heard about the Jackson scandal and is uncomfortable having the Keeleys in his house.

Finally, Albert emerges - dressed in head-to-toe drag as a middle-aged mother. Armand and Val are horrifed; fearing that Katherine's arrival would destroy the illusion. Meanwhile, Agador has prepared nothing for dinner but a bizarre soup containing, among other things, shrimp and hard-boiled eggs. Despite the many challenges facing them, Armand, Val, and Barbara all act the part and interact with Albert as "Mrs. Coleman."

During dinner, Louise Keeley notices that the soup bowls depict men in poses in a classical Greek style. Armand insists that she is mistaken and promptly fills everyone's bowl with soup before Mrs. Keeley or the Senator can take a closer look. The primary topic of conversation is politics and, despite many potential pitfalls, Albert quickly wins over the Senator with a very right-wing tirade on the moral collapse of American society. But Louise Keeley is still suspicious: the dinner was terrible and Armand kept leaving the table for no apparent reason. Kevin defends Mrs. Coleman as a true lady and remarks that Armand is just a "pretentious European".

Despite many efforts to warn her not to come, Katherine arrives and introduces herself as Mrs. Goldman. Kevin demands to know why there are two Mrs. Colemans; Val realizes that he cannot keep lying and pulls Albert's wig off, explaining to the Keeleys that while Katherine is his biological mother, Albert is actually his mother. Interestingly enough, Kevin seems more upset and confused by the Goldman's Jewish heritage, and makes half as many references to their homosexuality.

As feared, Kevin and Louise are taken aback upon learning that Albert and Armand are gay Jewish nightclub owners. Louise breaks down and Kevin announces that they are leaving, and demands that Barbara come with them who is reluctant to. However, they realize that they have been followed by paparazzi, and are trapped as news crews begin arriving at the scene.

The Goldmans, the Keeleys, Katherine and Agador sequester themselves in a bedroom and contemplate the best plan of action. Val and Barbara explain why they deceived Kevin and Louise; they are forgiven, but the Keeleys fear being tangled up in a media scandal if spotted in a gay nightclub. In a moment of brilliance, Albert then choreographs the Keeleys' escape - by dressing them up as drag queens and having them leave the club as the night's show ends with one of the club's act, "The Goldman Girls" and their performance and rendition of 's hit "We Are Family." The plan works perfectly and none of the media crews recognize Kevin, Louise or Barbara. Kevin, a supposed homophobe, isn't distressed to be wearing a dress; in one of his funnier lines, he complains that he looks fat in his dress, and no men will dance with him. The group leaves South Beach with Katherine, passing Kevin's assistant on the way out, who does not recognize him, even when they speak.

The film ends with Barbara and Val getting married in an ceremony attended by all of their families and friends.

A number of songs written by were used in the movie. The song that Albert rehearses during the sequence with the gum-chewing dancer is entitled "Little Dream", and was written specifically for use in the film. [Sondheim.com - Putting it together since 1994, http://www.sondheim.com/shows/the_birdcage/] The song that Armand and Katherine sing and dance to in her office is entitled "Love Is In The Air", was originally intended as the opening number for the Broadway musical "" in 1962. The song was cut from the show and replaced with "Comedy Tonight." [Sondheim.com - Putting it together since 1994, http://www.sondheim.com/shows/a_funny_thing_happened/#cut_songs]

"The Birdcage" met with mixed reviews ranging from praise to condemnation in both the mainstream press and the gay press for the portrayals of its gay characters.

The (GLAAD) praised the film for "going beyond the stereotypes to see the character's depth and humanity. The film celebrates differences and points out the outrageousness of hiding those differences." [ [http://www.glaad.org/media/archive_detail.php?id=217 GLAAD's press release on "The Birdcage"] , retrieved from www.glaad.org]

Hal Conklin and Denny Wayman, writing at cinemainfocus.com, said, "though the film is a comedy and could be excused as just a way to make people laugh, the humor is in fact the ultimate facade. Underlying the comedy, "The Birdcage" is a deeply disturbed representation of humanity. This film is a vacuum of spiritual values as depicted by the characters whose extreme behaviors are played out for their comic appeal. In reality, ac [t] ing out a facade rather than being honest in relationships robs those who do so of their intimacy as well as their integrity." [ [http://www.cinemainfocus.com/Birdcage,%20The_2.htm Conlin's & Wayman's review of "The Birdcage"] , retrieved from www.cinemainfocus.com on ]

Gay writer Michael Bronski, writing in "Z Magazine", said, "The Birdcage" is simple-minded, uninformed, laugh-track Hollywood junk and trades on the trendiness of certain aspects of gay male culture without ever understanding them. It also trivializes and diminishes gay lives by refusing to take them &mdash; or homophobia &mdash; seriously." [ [http://www.zmag.org/ZMag/articles/may96bronski.htm Bronski's review of "The Birdcage"] , retrieved from www.zmag.org]