Dennis William Quaid (born April 9, 1954) is an American actor known for his comedic and dramatic roles. First gaining widespread attention in the 1980s, his career rebounded in the 1990s after he overcame an addiction to drugs and an eating disorder. Some of his notable credits include Jaws 3-D, The Right Stuff, Great Balls of Fire!, The Big Easy, Far from Heaven, The Rookie, The Day After Tomorrow, The Parent Trap, Soul Surfer and Frequency.

Quaid was born in Houston, Texas, the son of Juanita Bonniedale "Nita" (née Jordan), a real estate agent, and William Rudy Quaid (November 21, 1923 – February 8, 1987), an electrician and a third cousin of performer Gene Autry.[1] He is the younger brother of actor Randy Quaid. The Quaid brothers grew up in Bellaire, Texas, which is a small city surrounded by Houston, and in southwest Houston. Quaid has Irish and Cajun (French) ancestry.[2] He attended Paul W. Horn Elementary School in Bellaire and Pershing Middle School in Houston. He studied Mandarin and dance at Bellaire High School in Bellaire, Texas, and later in college, at the University of Houston, under drama coach Cecil Pickett, who had previously taught at Bellaire High and whose daughter is actress Cindy Pickett.

After his brother, Randy, was nominated for an Academy Award for Best Supporting Actor for his role in The Last Detail (1973), Quaid dropped out of the University of Houston before graduating and moved to Los Angeles to pursue an acting career of his own.[2] He initially had trouble finding work but began to gain notice when he appeared in Breaking Away (1979) and earned good reviews for his role in The Right Stuff (1983).[2]

Known for his grin,[3] Quaid has appeared in both comedic and dramatic roles.[2] Quaid had starring roles in the films Enemy Mine (1985) and Innerspace (1987). He also achieved acclaim for his portrayal of Jerry Lee Lewis in Great Balls of Fire! (1989).[2] In 1989, he also appeared throughout the Bonnie Raitt music video for the song "Thing Called Love."[4]

He portrayed U.S. President Bill Clinton, alongside Michael Sheen as Tony Blair and Hope Davis as Hillary Clinton, in the 2010 film The Special Relationship. 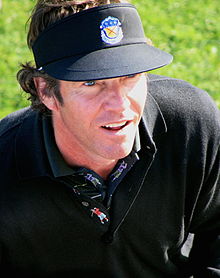 Quaid was raised in the Baptist faith.[5][6]

Quaid dated Shanna Moakler in 2001. They were together when she was approached by Playboy and they discussed it before she posed nude in the magazine.[8] The relationship lasted for eight months.[9]

On November 18, 2007, hospital staff mistakenly gave Quaid's ten-day-old twins a dosage of heparin 1,000 times the common dosage for infants.[13][14] Their attorney said the newborns will "be fine now", but Quaid filed a lawsuit against the drug manufacturer, Baxter Healthcare, claiming that packaging for the two doses of heparin are not different enough.[15] In May 2008, the Quaids testified before the United States House Committee on Oversight and Government Reform, asking U.S. Congress not to preempt the right to sue drug manufacturers for negligence under state law.[16]

In October 2009, Dennis Quaid narrowly avoided being arrested for DUI, when a police officer managed to persuade him to get out of his car and get a cab.[17]

In addition to acting, Quaid is a musician and plays with his band, the Sharks. Quaid also has a pilot's license and is a scratch golfer. In 2005, he was named as the top golfer among the "Hollywood set" by Golf Digest.

After the filming of The Express: The Ernie Davis Story Quaid went to Cleveland Browns Stadium to dedicate Davis's jersey.

There have been extensive stories about Quaid's past abuse of cocaine. In a candid 2002 interview with Larry King on his talk show, after King asked about his motives for using drugs, Quaid responded, "Well, you got to put it in context. Back in the late '60s, early '70s. That was back during the time where, you know, drugs were going to expand our minds and everybody was experimenting and everything. We were really getting high, we didn't know it. And cocaine at that time was considered harmless. You know. I remember magazine articles in 'People' Magazine of doctors saying, it is not addicting. It is just—alcohol is worse. So I think we all fell into that. But that's not the way it was."

When asked if he believed he had ever been addicted to the drug, he responded, "It was a gradual thing. But it got to the point where I couldn't have any fun unless I had it. Which is a bad place to be." Later in the interview he said, "But I saw myself being dead in about five years if I didn't stop."[18]

In April 2011, while promoting his film, Soul Surfer, Quaid was very candid when it came to questions regarding his past drug abuse. Quaid blamed his sudden thrust into the Hollywood scene for his trouble with cocaine. He said, "Coming from where I came from - lower-middle-class life, from Houston into Hollywood - and all of a sudden this success starts happening to you, I just didn't know how to handle that." Quaid also made bold accusations about the American film industry in the 1970s, claiming, "Cocaine was even in the budgets of movies, thinly disguised...It was petty cash, you know? It was supplied, basically, on movie sets because everyone was doing it." On his addiction, Quaid said, "I'd wake up, snort a line, and swear I wasn't going to do it again that day...but then 4 o'clock rolled around, and I'd be right back down the same road like a little squirrel on one of those treadmills."[19]

Quaid lends his name to the annual "Dennis Quaid Charity Weekend" (formerly the "Jiffy Lube/Dennis Quaid Charity Classic") in Austin. The golf tournament attracts numerous celebrities with the proceeds split among local children's charities. He is a member of the Bel-Air Country Club in Bel-Air, Los Angeles, California, and tries to stay at homes on private courses when he is on the road.

Quaid works with the International Hospital for Children in New Orleans, Louisiana. He makes trips to Central America to help build medical clinics and transport sick children back to the U.S. for treatment they cannot get locally.