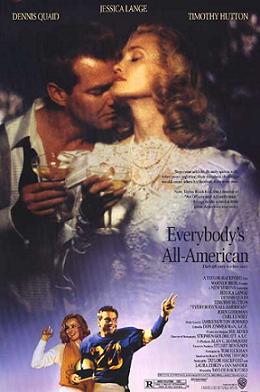 The film covers 25 years in the life of college football hero Gavin Grey (). When he marries campus sweetheart Babs Rogers () and is picked up by the pros, a happily-ever-after denouement is predicted by friends and family. It is clear from the outset, however, that Grey is going to have to do a lot of growing up over the next few decades. Babs does her best to keep in step with her husband's career and mood swings, and in so doing becomes the "parent" in the family. also stars as Grey's best buddy, and is on hand for a romantic-triangle subplot.

* Filming was stopped for weeks when had his collarbone broken by of the during filming. Footage of Quaid rolling in pain on the sidelines of the snow game appears in the finished film.

* A key scene featuring a candlelight parade involving large numbers of extras was filmed, on the steps of the , when snow started falling. Despite the beauty of the scene, director elected to reshoot the scene, as snow in in November was such a rare event that he was worried it would be seen as a special effects goof in the film.

* The game scenes were shot in LSU's Tiger Stadium during the halftimes of actual LSU games. The goalposts were altered to resemble the vintage "H" posts as needed during filming. Vertical posts will moved in place for the bottom portion of the H, and a multi-colored fabric covering was used to conceal the center upright. Upon completion of filming, the vertical posts and fabric were retracted so as not to interfere with the LSU games.

* Some of the filming of the football scenes took place during halftime of the 1987 LSU-Alabama game. The producers wanted to continue shooting some scenes following the game, so they requested that the LSU fans remain after the game so that they could finish the scenes. However, Alabama won in an upset, and ten minutes after the game, the only fans still in the bleachers were wearing crimson, forcing the producers to finish shooting the following week.

* Michael Apted was all set to direct 's script in 1982 until Warner Brothers baulked at the $16 million price tag, leading man and the fact that American football movies never do any business overseas. During its 6 years in development hell, , and all circled the project.

*The work has been said to be a fictionalization of the life of , who was a famous college football player at Louisiana State University. Cannon won the and went onto a professional football career with the and, then the . After he finished football, Cannon became a and was later prosecuted for counterfeiting. However, Frank Deford, author of the book, denies that there is any connection between his work and the real-life Dr. Cannon.

*The film contains a much more hopeful and upbeat ending than the book, where Gavin takes his own life after trying to kill Babs as well.