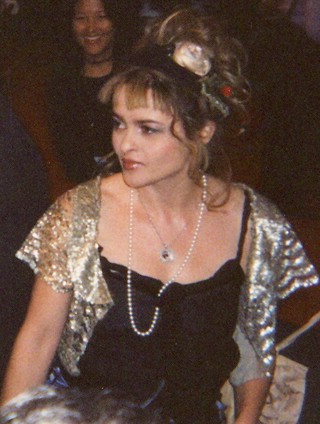 Helena Bonham Carter (born 26 May 1966) is an Oscar and -nominated English actress. She is best known for her portrayals of Lucy Honeychurch in the film "A Room with a View", in the film "Fight Club", in "Harry Potter and the Order of the Phoenix", her Oscar-nominated performance as Kate Croy in "The Wings of the Dove", her -nominated performance as in "", as well as her other collaborations with her , . Bonham Carter has recently signed on to star as the leading villain, Serena, alongside in "", and The Red Queen in her partner 's 2010 film, "Alice in Wonderland".

Bonham Carter was born in , . Her mother, Elena (née Propper de Callejón), is a . Her father, , was a merchant banker and the alternate UK director representing the at the in during the 1960s;

Bonham Carter has two brothers, Edward and Thomas, and is a distant cousin of fellow actor , who played Mr. Bingley in the 1995 production of Pride and Prejudice. Bonham Carter was educated at the , a girls' in , London and later at , a co-educational independent school near the . Bonham Carter was denied admission to King's College, , not because of her grades or her test scores, but because school officials were afraid that she would leave mid-term to pursue her acting career. Because of Cambridge's rejection, Bonham Carter decided to concentrate fully on acting.

These early films led to her being typecast as a " queen", and "English rose", playing pre- and early 20th century characters, particularly in films. She expanded her range,; her more recent films are "Fight Club", "", and 's "Charlie and the Chocolate Factory", "", "", and "Sweeney Todd the Demon Barber of Fleet Street". She also speaks French fluently, starring in a 1996 French film "Portraits chinois". In August 2001, she was featured in "Maxim". Bonham Carter was a member of the jury at the that unanimously selected "The Wind That Shakes the Barley" as the best film. [cite web|url=http://gofrance.about.com/od/cannesfilmfestival/a/cannes2006jury.htm|title=Cannes Film Festival 2006 Official Juries|accessdate=2008-10-07|date=2008-10-07|work=Go France]

". It is said that she will play a small but pivotal role, but will be the lead villain of the film. [cite web|url=http://screenrant.com/terminator-4-helena-bonham-carter-niall-2837/|title=Terminator 4 Gets Helena Bonham Carter! |accessdate=|date=2008-07-01|publisher=ScreenRant]

In May 2006, Bonham Carter launched her own fashion line, "The Pantaloonies," with swimwear designer Samantha Sage. Their first collection, called Bloomin' Bloomers, is a Victorian style selection of camisoles, mop caps and . The duo are now working on Pantaloonies customized which Bonham Carter describes as "a kind of on the bum". Bonham Carter also planned to return to the with an appearance in "Rubenstein's Kiss"; however, the play was delayed because of her busy schedule. The production, also set to star of fame, was due to open in November 2004 but has now been postponed. [cite web|url=http://women.timesonline.co.uk/tol/life_and_style/women/celebrity/article707405.ece|title=English eccentric|accessdate=2008-10-07|date=2006-04-22|work=Times Online]

Bonham Carter was in a relationship with actor (with whom she appeared in several films) from 1994 (while he was married to actress ) to the summer of 1999. She then briefly dated actors and . [cite news|last=WENN|first=|coauthors=|title=Steve Martin Dumped By Helena Bonham Carter
pages=|publisher=IMDB News|date=|url=http://www.imdb.com/name/nm0000188/news|accessdate=2007-07-13] In October 2001, she began her current relationship with director (while he was "engaged" to ), whom she met while filming "Planet of the Apes". She has appeared in all of his subsequent films. They live in , , in adjoining houses with a connecting hallway, each part decorated and styled to suit their own personalities, because they felt they couldn't live 'together' but didn't want to live apart.

In 2008, both Bonham Carter and Burton put their American apartments up for sale. The apartments are located in the area, in . The couple sold them for a collective $8.75 million. [cite web|url=http://www.imdb.com/news/ni0550921/|title=Burton + Bonham Carter Sell New York Homes|accessdate=2008-08-14|date=2007-12-27|publisher=WENN] In early October, it was released that Bonham Carter had become a of [http://www.actionduchenne.org Action Duchenne] , the national charity established to support parents and sufferers of . Bonham Carter released the statement "As a patron of Action Duchenne, I would like to urge as many people as possible to find out about the work of the charity and the devastating effects of Duchenne Muscular Dystrophy. Treatments and a cure seem tantalisingly close but they will not appear without further support and funding. Please join Action Duchenne in helping to make muscle wasting history." [cite web|url=http://london.jollypeople.com/helena-bonham-carter-action-duchenne/|title=Helena Bonham Carter, New Action Duchenne Patron |accessdate=|date=2008-10-02|publisher=Jolly People]