The Wind That Shakes the Barley (film)

The Wind That Shakes the Barley (film)

Infobox Film
name = The Wind That Shakes The Barley 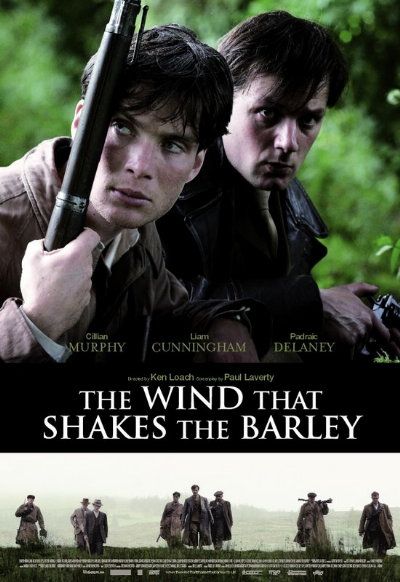 Widely praised, the film won the at the . Loach's biggest box office success to date,

It is 1920, and Damien O'Donovan (Murphy), a young doctor, is about to leave to work in a hospital. Meanwhile, his brother Teddy (Delaney) commands the local of the . After a match, Damien witnesses the fatal beating of his friend, Micheál Ó Súillebheán, by British paramilitaries. Although shaken, Damien rebuffs his friends' entreaties to stay in Ireland and fight for independence, saying that the IRA is too outnumbered to win. However, as he is boarding a train, Damien witnesses the assaulting a railway official for refusing to allow the troops to board and the subsequent brave resistance of the train driver, and this leads him to change his plans. He is sworn into the IRA and joins Teddy in a guerrilla war against the British.

Determined to retaliate for Micheail's murder, Damien and his IRA brigade raid the local police barracks and steal guns. Then they ambush the Auxiliaries, gunning down four of them in a pub. In the aftermath, landowner Sir John Hamilton () coerces one of his servants, IRA member Chris Reilly (), into informing. As a result, the entire brigade is arrested by the British Army. In their cell, Damien meets the train driver, Dan (Liam Cunningham), and learns that the union activist shares his opinions. The British interrogator rips out brigade leader Teddy's fingernails when he refuses to name names. Hearing his cries from their nearby cells, Damien and the other prisoners sing the Irish national anthem to distract Teddy from his pain. A young British soldier of Irish descent soon helps all but three of the prisoners escape.

After the involvement of Sir John and Chris is revealed to the IRA, both are taken hostage and marched to a cottage in the mountains. As Teddy is still recovering, Damien is temporarily placed in command. After the torture and execution of the three IRA prisoners, the Brigade receives orders to "execute the spies." Despite the fact that Chris Reilly is a lifelong friend, a rattled Damien shoots both hostages with a revolver. Later, he tells his sweetheart, message runner Sinéad Sullivan (), about the shame of facing Chris Reilly's mother, concluding, "I can't feel anything."

After Damien and Teddy's unit ambushes and defeats an armed convoy of the , another detachment of "Auxies" attacks and burns the farmhouse of Sinéad's family. Sinéad is held at gunpoint while her head is shaved and bloodied with sheep shears. Low on ammunition, Damien is restrained by Teddy and can only watch. Later, as Damien comforts Sinéad, a messenger arrives with news of a formal between Britain and the IRA. During a village celebration, Damien and Sinéad steal away for a sexual interlude.

When the terms of the are announced, the IRA divides over whether or not to accept it. Teddy argues for the Treaty and peace, asserting that , the British , risked his political career by offering the terms he did. Damien opposes the Treaty for failing to deliver full independence from Britain. Dan further argues that the Treaty will only change "the accents of the powerful and colour of the flag." As the grows stronger, Damien and his Anti-Treaty comrades feel a sense of alienation. When Teddy arrives in his new officer's uniform, one of Damien's friends dubs him a "." Later, when the village priest preaches in favor of the Free State, Damien interrupts his sermon, denounces the Treaty, and storms out followed by half the congregation. He affiliates himself with the and begins training teen-aged recruits in .

On the verge of war with his own brother, Teddy reaches out to Damien and asserts that the farmers and businessmen of the district are scared of the socialist rhetoric in his Anti-Treaty pamphlets. Damien responds by saying that the poor are being mistreated and that only can stem the tide of emigration. Teddy asserts that the Free State will "tear up the Treaty as soon as we're strong enough..." Damien says that, by swearing an oath of allegiance to King , Teddy has wrapped himself in the , "the Butcher's Apron."

After the first battle of the breaks out in Dublin, Damien and his men commence hit-and-run tactics against the new . Soon after, Damien is captured during a raid for arms on a Free State barracks and is sentenced to death. As he awaits the firing squad in the same cell where the British had imprisoned them earlier, Teddy pays him a visit. He describes his dream of building a free Ireland where they can both raise families in peace. Teddy pleads with Damien to reveal where the IRA is hiding the stolen arms, offering him full in exchange. Damien refuses, saying that he killed Chris Reilly for being an informer. Writing a goodbye letter to Sinéad, Damien declares his love for her, adding that he knows what he stands for and that he is not afraid.

At dawn, Damien is marched before a firing squad. As both men fight back tears, Teddy gives the order and the squad fires. Weeping, Teddy unties Damien's body and cradles his brother in his arms. When Teddy delivers Damien's letter to Sinéad, she angrily orders him to leave. Overcome with grief, she falls to her knees, and screams Damien's name.

Although it is focused on Irish history and identity and stars mostly Irish actors, the film was made by British director Loach and was an between companies in Ireland, the , , , and .

The title derives from the song of the same name, "The Wind That Shakes the Barley," by 19th century author . The song made the phrase "the wind that shakes the barley" a motif in Irish Republican song and poetry. historian Donal O Drisceoil was Loach's historical adviser on the film.

The film was shot in various towns within during 2005. Some filming took place in : a scene was shot along North Main Street and outside a building next to the Court House (it was from Lee’s Hotel in Bandon (now the Munster Arms) on , . The ambush scene was shot on the mountains around Ballyvorney while the farmhouse scenes were filmed in Coolea.Fact|date=July 2007 The execution scene was filmed at , scene of many real-life executions during the .

Many of the extras in the film were drawn from local Scout groups,

Amongst the songs on the film's soundtrack is "", a 17th century Irish Jacobite song whose lyrics the nationalist leader changed to focus upon Republican themes.

The commercial interest expressed in the was initially much lower than in other European countries and only 30 prints of the film were planned for distribution in the UK, compared with 300 in . However, after the award the film appeared on 105 screens in the UK.

The RESPECT political party, of which Ken Loach is on the national council, called for people to watch the film on its first weekend in order to persuade the film industry to show the film in more cinemas.

The reaction from film critics has generally been positive. As of , 2008, the review aggregator reported that 88% of critics gave the film positive reviews, based on 102 reviews. [cite web|url=http://www.rottentomatoes.com/m/the_wind_that_shakes_the_barley/ |title=The Wind That Shakes the Barley - Rotten Tomatoes |accessdate=2008-01-05 |publisher=] reported the film had an average score of 82 out of 100, based on 30 reviews. [cite web|url=http://www.metacritic.com/film/titles/windthatshakesthebarley |title=Wind That Shakes the Barley, The (2007): Reviews |accessdate=2008-01-05 |publisher=]

The ""'s film critic described it as a "brave, gripping drama" and said that director Loach was "part of a noble and very English tradition of dissent"

The film was attacked by some commentators, some of whom hadn't seen it, including .

One strain of commentary in Ireland examined the Irish War of Independence as a socialist or class based conflict, as well as a nationalist uprising.