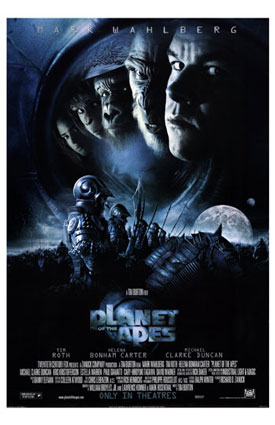 "Planet of the Apes" is a 2001 and of the 1968 film of the same name. directed the film, which stars , as well as , , , and . "Planet of the Apes" tells the story of astronaut Leo Davidson landing on a planet inhabited by intelligent humanoid apes. The apes treat the humans as slaves, but with the help of a female ape named Ari, Leo starts a .

Development for a remake of "Planet of the Apes" started as far back as 1988 with . Rifkin's project almost commenced before it was canceled. ' script titled "Return of the Apes" had , and attached as producers and as director with set to star. Creative differences ensued between Hayes and financier/distributor . , , and the later became involved.

With 's script, was hired as director, and the film was put into active development. and Mark Rosenthal rewrote the script, and filming took place from November 6, 2000 to April 2001. "Planet of the Apes" was released to mixed-negative reviews but was a financial success. Much criticism focused on the confusing ending, although Rick Baker's designs were praised. Despite its financial success, Fox chose not to produce a sequel.

Aboard the "Oberon", Leo Davidson works closely with primates who are trained for space missions. His favorite co-worker is a chimpanzee named Pericles. With a fatal electromagnetic storm approaching the station, a small space pod piloted by Pericles is used to probe the storm. Pericles' pod heads into the storm and disappears. Against his orders, Leo takes a second pod and goes in pursuit of Pericles. Entering the storm, Leo loses contact with the "Oberon" and crashes in a world in the year 3002. He comes across a world where humanoid apes who speak human tongue control human beings as slaves.

Leo comes across a female chimpanzee named Ari, who protests the awful treatment humans receive. Ari decides to buy him and a female slave named Daena to have them work as servants in the house of her father, Senator Sandar. Leo escapes his cage and frees other humans. Ari sees them, but Leo manages to convince Ari to join their cause. Leo forms a human rebellion against the apes and develops a with Ari and Daena. General Thade and Colonel Attar march ape warriors in pursuit of the humans. Leo discovers Calima (the temple of "Semos"), a forbidden but holy site for the apes. Calima turns out to be the remains of the "Oberon", his former space station, which has crashed on the planet's surface and looks ancient (the name Calima coming from the sign "CAution LIve aniMAls", the letters Calima being those not covered in dust). According to the computer logs, the station has been there for thousands of years. Leo deduces that when he entered the vortex he was pushed forward in time, while the "Oberon", searching after him, was not, crashing on the planet long before he did.

The "Oberon"'s log reveals that the apes on board, led by Semos, organized a mutiny and took control of the vessel after it crashed. The human and ape survivors of the struggle left the ship and their descendants are the people Leo has encountered since landing. A battle ensues between the humans and the apes. A familiar vehicle descends from the sky and is identified immediately by Leo. It is the pod piloted by Pericles, the chimp astronaut. Pericles was pushed forward in time as Leo was, and had just now found his way to the planet. When Pericles lands, the apes interpret his landing as the return arrival of Semos, the first ape, who is their god. They bow, and hostilities between humans and apes disappear.

General Thade chases Leo into the "Oberon", where he attacks Pericles and breaks his leg. Thade becomes trapped in the pilot's deck and last seen huddled under a control panel, still alive. Leo decides it is time for him to leave the Planet of the Apes, after he says goodbye to Daena, who loves him and kisses Ari. Leo climbs aboard Pericles' pod, which is undamaged, and uses it to travel back in time through the same electromagnetic storm. Leo crashes on what appears to be on Earth in 2029. He looks up to see the is now a monument in honor of General Thade. A swarm of ape police officers descend on Leo.

* as Capt. Leo Davidson: A United States Air Force astronaut who accidentally opens a portal to another world inhabited by talking human-like apes. Leo leads a rebellion as leader of the humans. Wahlberg dropped out of "Ocean's Eleven" in favor of "Planet of the Apes". was eventually cast in his role. [cite news | author = Michael Fleming | url = http://www.variety.com/article/VR1117786195 | title = Inside Move: Strikes cause A-list shuffles | work = Variety | date = | accessdate = 2008-09-30] Other actors who were in contention for Leo Davidson wanted to see the script before signing a contract. [cite news | author = KJB | url = http://movies.ign.com/articles/034/034353p1.html | title = Mark Wahlberg Signs on to "Planet of the Apes" | work = | date = | accessdate = 2008-10-02] Wahlberg signed on after a five-minute meeting with Burton.

, who portrayed the lead role in the original film, makes a as Thade's father. Roth admitted he was "not comfortable" appearing opposite Heston, then president of the . "I come from the exact opposite end of the . Burton had to persuade me to do it. Finally, I decided that it was okay because it's fiction."

president Craig Baumgarten was impressed with 's filmmaking with "". In 1988, Rifkin was brought in the studio to pitch ideas for films. Rifkin, being a fan of the 1968 "Planet of the Apes" felt it was best to continue the film series. "Having experience, I promised I could write and direct a huge-looking film for a reasonable price and budget, like "Aliens"."

The project was put on and almost entered . Rick Baker was hired to design the with composing the . and were in contention for the lead role. "I can't accurately describe in words the utter euphoria I felt knowing that I, Adam Rifkin, was going to be resurrecting the "Planet of the Apes". It all seemed too good to be true. I soon found out it was."

By 1993, Fox hired and as producers. and were being considered as possible directors,

Stone brought to write the screenplay entitled "Return of the Apes".

Fox president called "Return of the Apes" "one of the best scripts I ever read".

Fox became frustrated by the distance between their approach and Hayes' interpretation of Stone's ideas, as producer Don Murphy put it, "Terry wrote a "Terminator" and Fox wanted "".

Oliver Stone pursued other films of his own, Peter Chernin was replaced by and a drunken Dylan Sellers crashed his car, killing a much-loved colleague and earning jail time, while producers Don Murphy and Jane Hamsher were "paid off. After they got rid of us, they brought on Chris Columbus," Murphy stated. "Then I heard they did tests of apes , which didn't make much sense."

Hamm's script had an ape astronaut from another planet crash-landing in , launching a virus that beings making human extinct. Dr. Susan Landis, who works for the , and Alexander Troy, a scientist, use the ape's spacecraft to return to the virus' planet of origin, hoping to find an antidote. They find an urban environment where apes armed with heavy weapons hunt humans. Landis and Troy discover the antidote and return to Earth, only to find in their 74-year absence that apes have taken over the planet. "The 's once proud porcelain features have been crudely chiseled into the grotesque likeness of a great grinning ape".

In 1999, turned down the chance to write the script, but decided to sign on "when I found out I could have an extensive amount of creative control". Fox projected the release date for July 2001, while Broyles sent the studio an outline and a chronicle of the fictional planet "Aschlar". Entitled "The Visitor" and billed as "episode one in the Chronicles of Aschlar",

Under Burton's direction, Broyles wrote another draft, but his script was projected at a $200 million budget. Fox wanted to cut it to $100 million.

Konner and Rosenthal were rewriting the script even as sets were being constructed.

To compose the , Burton hired regular collaborator . Elfman had previously been set as composer when was to do his remake in 1989

Much criticism drew against the confusing ending. , who portrayed General Thade, said "I cannot explain that ending. I have seen it twice and I don't understand anything."

Fox stated that if "Planet of the Apes" is a financial success, then a sequel would be commissioned.